Everything about Transformers: Fall of Cybertron is bigger. Way bigger. Bigger stages, bigger enemies, bigger weapons, big robo-dino action and really, really big bots. Predecessor War for Cybertron was well received with its solid combat and great multiplayer, but last week High Moon Studios showed us that they have even bigger plans for the follow-up.

Good news: Fall of Cybertron‘s game areas are bigger. High Moon told us that they’ve heard fans’ complaints on War‘s tight, corridor-ish stages, which really restricted bots’ movements. For Fall they’ve opened it up quite a bit with what they’re saying are the biggest stages they could possibly make with the Unreal Engine. I was told that the first bit I saw, an already large outdoor air/ground bridge defense battle, was only a third of the actual stage size.

This first demo segment featured Vortex, a bot that can fly both as a helicopter and a jet. He was able to transition smoothly from one form to the next, switching nicely from air/missile attacks to ground/melee ones. It was a short tease, but it already had me wanting to reach for the controller in this hands-off showing.

Speaking of big: In the next demo section we got to see Bruticus in action. Five Decepticons came together to control this massive bot, which, being about 80 feet tall, had no problem making quick work of the stage’s small baddies. Of course, Bruticus’ laser and wave attacks, spinning shield and flame thrower helped a bit. I can already tell that he’s going to be a blast to play.

Moving on, for contrast, we saw Jazz in a very sniper-y section. He’s equipped with a sort of grappling hook that works as a zip line, letting him move across this area’s high vantage points to pick off fast, wall-crawling, spider-y bots. But unlike sniping in other games, this section moved very fast as Decepticon pressure came at Jazz from all sides. 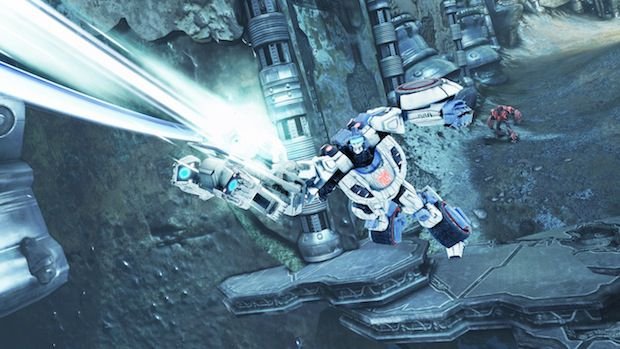 Optimus Prime is big, but not nearly as big as the once dormant city-sized Autobot named Metroplex. Optimus now has the Matrix of Leadership inside of him, which lets him issue orders to Metroplex. Seeing a stage where Optimus worked to fend off a Decepticon attack was like watching a massive two-tiered ballet of destruction; Prime was killing it in the foreground while sending Metroplex to send a storm of missiles and structure-crushing melee attacks to everything in the background. Beautiful.

Finally, while not as big as Bruticus or Metroplex, Grimlock is still a robo dinosaur, and that makes him pretty huge in his own way. His power is “big” enough that he doesn’t even need a gun. Instead, Grim is all about melee attacks, starting out with sword and shield. Once he attacks enough to build up a rage meter he can transform into his robot T-Rex form. 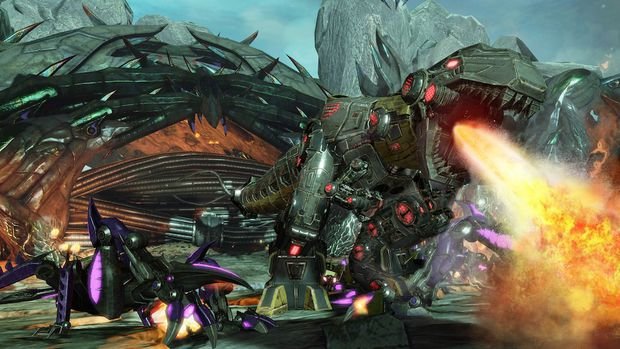 I saw a segment where Grimlock had set out to save his captured dino buddy Snarl. Once he got his meter up to transform, he took on waves of Insecticons, smashing them to bits with tails and claws, and then breathing fire on them to make sure they were dead. You’d have to be dead inside to not want to play as Grimlock after seeing this.

Throughout these demo segments we saw some of the improvements that High Moon has planned for Fall. Fans of War can now expect story segments that let you take a break from fighting. They’ve also done away with the dual campaign in this sequel, opting to use slick, seamless character swapping to tell the story. In one segment I saw Starscream spying on a situation where Grimlock was held captive. Players start the scene playing Starscream, but end it controlling Grimlock, with no transition marking the change. 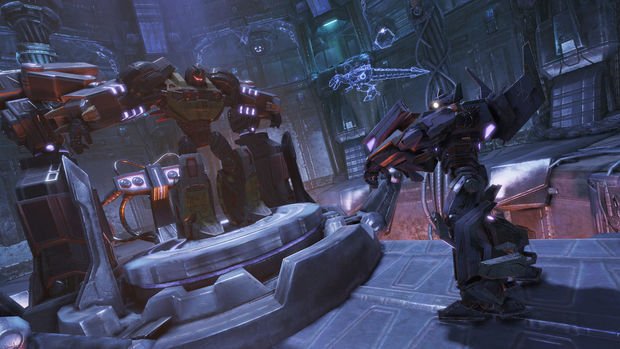 Outside of some examples of character customization, which looks to be much more open than before, High Moon was not ready to talk about multiplayer. Anyone that played War for Cybertron knows to expect good things, though. Expect to hear more on multiplayer this summer.

By now you must be tired of the word “big.” Sorry. It’s already clear that Transformers fans have a bigger, better sequel to look forward to. High Moon Studios have gone big with bigger stages and bigger storytelling, but the clear draw here is going big with Grimlock, Bruticus and Metroplex. And something tells me they have even bigger stuff up their sleeves.