I played games back in the twilight past, before the idea of a console game demo had even fluttered in a publisher’s waking thoughts. If I think back, I realize there must have been a decent amount of money wasted on the games I discovered I didn’t care for after a half hour of play. Demos therefore amazed me from the very start, and I am eternally thrilled to be able to give most titles a spin before I buy them. According to a study from last week’s MI6 video game marketing conference, however, it seems that demos are actually less effective than trailers when it comes to selling games. Huh?

The study was presented by Gregory Short and Geoffery Zatkin, the main men on the Electronic Entertainment Design and Research group (EEDAR.) The study found that the big selling titles on the 360 and PS3 actually benefitted from trailers from the Live and PS3 networks, rather than demos. Perhaps the idea of a game is still more beguiling than the hands-on experience? Hit the jump for graphs, personal meanderings and possibly more cheeseburgers.

So here are the charts shown in connection with the research done by the EEDAR. I know charts are mind-numbing business and make you want to walk away from the computer, but give these a second to sink in. 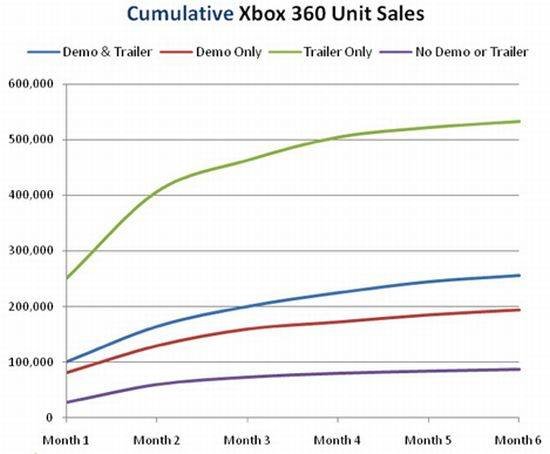 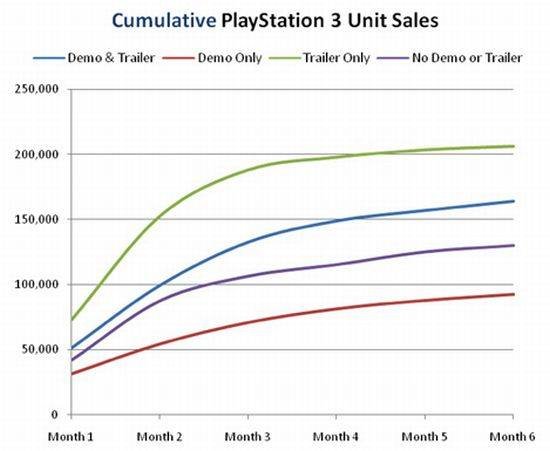 Okay…so what you see there, in order of effectiveness, is that people seem to like trailers, demo & trailers, no demo or trailer and demo only best, in that order (for PS3.) The 360 stats make a little more sense at a glance, as no demo or trailer is the lowest stat, but you still find yourself saying: wait…some people like nothing better than they like an actual demo? Really?

It sounds incredibly odd, yet it got me thinking about the way I felt about games when I played the NES every day, and I remembered that the excitement I felt about a release had a lot to do with my own imagination, which was a good thing as it was pretty strong back in those days. In the modern age, information about any upcoming game is everywhere, from print to the internet, so even without a demo we can find out a tremendous amount of information about any upcoming title. Bottom line — gamers will likely buy a game even if they haven’t played it first based on their own emotions about it, which isn’t so different from me skipping home from the game store at age ten holding a few brightly colored NES rental boxes.

It’s nice to think that same feeling plays a role today, but a different viewpoint would suggest that publishers are smarter not to put out demos for games that perhaps are less than stellar, which means they sell copies anyway, but the gamer is merely disappointed when he or she gets home and plays the final product. Also, if one takes into account that the biggest selling titles are all huge series entries (Halo, GTA, Call of Duty, etc) and can have a huge effect on the “trailer only” demographic, the information above can’t be viewed in a general light.

What’s your opinion — do you prefer to buy a game after playing the demo, or will you buy a game you are interested in no matter what?