Twitter, the nascent microblogging service that’s the new hotness for social networking (MySpace is so 2006), has had numerous ancillary sites spring up around it. This ranges from the statistically-oriented (TweetStats) to the utility-based (Twitpic) to the technically-sociological-I-guess (Cursebird).

But there’s a new site on the scene, and it’s designed for gaming fans. Tweet My Gaming, brought to you by the folks behind GamerDNA, is a stroke of genius. People love visual representations of stuff, because they make it very easy to follow and understand trends. Tweet My Gaming takes a massive amount of raw data — i.e., the world’s tweets about videogames — and presents it in a manner that allows you to see the videogame conversation on Twitter in real time.

I recently had the chance to speak with GamerDNA’s Community Manager, Sam Houston (@samhouston), to find out more about Tweet My Gaming. If you’re interested, read on.

First, a little background on GamerDNA: it’s a social networking site built around gamers. You can input your gaming IDs (e.g., Xbox Live, Steam), as well as the games you like to play, and its API (“Helix”) will aggregate that data and use it to suggest related games for you. Plus, like Raptr, GamerDNA allows you to show off your videogame exploits in one place for all to see; the site’s founder and CEO, Jon Radoff, calls it a portable gaming identity. It’s a great community for gamers to find games they might like to play, to connect with other gamers who have similar tastes, and to boast of in-game accomplishments.

Twitter is a data stream just like any other, so a site like Tweet My Gaming seemed like an inevitability. And of course, the GamerDNA crew already had a wealth of experience in this field; GamerDNA has been around in some form for over three years (though it wasn’t actually called that until last April). As Houston told me, Tweet My Gaming is a “mash-up” of the GamerDNA API and the Twitter API. (He explained that GamerDNA worked with Twitter to “make sure that [TMG] would do what we needed it to do.”) TMG pulls the top games on GamerDNA and searches the titles of those games on Twitter. You don’t need to use a hashtag or anything; TMG looks for game titles along with appropriate acronyms (for example, it searches for “MW2” as well as “Modern Warfare 2”).

TMG then takes those tweets and displays them in near-real time on its front page; Houston said that most tweets are aggregated and show up on the site within a minute. That’s a great concept already — but alone, it’s probably something that you would look at once or twice, think to yourself, That’s kinda neat, and then forget about (though admittedly, watching the feed can be rather mesmerizing). So TMG takes it up a few steps. The page’s right sidebar shows the top 22 most-talked-about games, but it’s not just a list of them; each game gets its own graph of tweets showing the past 24 hours of activity on Twitter regarding that particular game. The graph also lists the number of tweets all-time about the game, as well as a percentage trend of the past hour (for example, tweets about God of War III are up 225%). 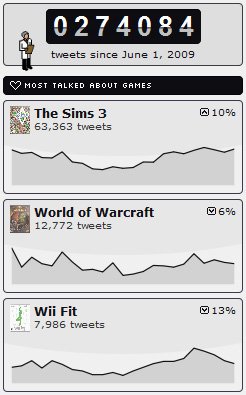 Demographically, Twitter users tend to be young and tech-savvy — a group that has a high crossover with gamers. But the top titles on TMG prove that there are certain games that transcend such boundaries, and are discussed by people from all walks of life. TMG’s most-talked-about game is The Sims 3, something that everyone can enjoy. It far outstrips the competition with (as of this writing) over 63,000 tweets — that’s nearly one-fourth of the 274,000-plus tweets that have been tracked by TMG since it launched last week. (The next closest games are World of Warcraft, which over 12,000 tweets have mentioned, and Wii Fit, with nearly 8,000 tweets.)

While those three titles may not technically be “casual” games, they each share a sizable user base: The Sims 3 sold 1.4 million copies last week, World of Warcraft boasts more than 11.5 million subscribers, and over 18 million people worldwide have bought Wii Fit. Those are facts that some people are aware of, but seeing the trends on Twitter is even further proof, and that’s why TMG is important. In fact, it has the potential to become a resource as valuable as services like IGN’s GamerMetrics and GameSpot Trax in the field of providing data on gamers’ tendencies to publishers and retailers. But when I brought up the topic with Houston, he became somewhat cagey, only noting that TMG had just launched, and that its staff was exploring all kinds of opportunities.

But ultimately, the fun of TMG is that it’s “all about the conversation around games,” as Houston put it, so it “complements GamerDNA in a lot of ways.” He pointed out that the site saw a huge uptick in tweets about The Beatles: Rock Band after its mind-blowing opening cinematic was shown during the Microsoft press briefing at E3 — in fact, the game was #1 on the site for a while, before The Sims 3 was released the following day. To see such details, you can even check out individual game pages on TMG, each of which provides a game’s own real-time feed of tweets. There’s also a list of the number of tweets each day about the game, in addition to the past-day graph that would appear in the top 22 front-page list.

Many of Twitter’s web apps have had lives like fireworks — they’ve come up, sparked brilliantly for a bit, and then fizzled and faded out of the Internet’s minuscule short-term memory. But with the weight of the already-established GamerDNA behind it, and the bountiful possibilities for its data-tracking services, Tweet My Gaming could be around for quite some time. Check it out, and while you’re at it, follow me on Twitter!