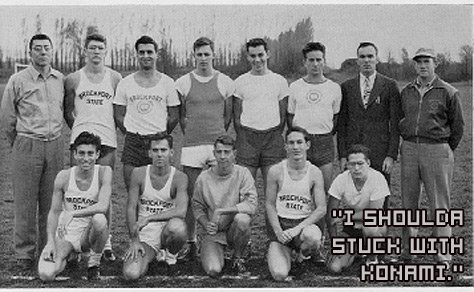 Ask anybody that’s in this photo, and they’ll tell you that very few things in life are consistant: death, taxes, that burning sensation when you pee, and XBLA releases every Wednesday. This week, the retro arcade classic Track and Field will be digitally distributed straight into your cerebellum via Xbox Live Arcade for a measly 400 points.

Let’s take a look at some of those neato-bandeato features:

Field” from Konami. Originally released in 1983, Track & Field was an arcade smash. The updated version for Xbox LIVE Arcade features the same button mashing game mechanic as the original, and now allows for up to four player multiplayer competition on one Xbox 360 or over Xbox LIVE.

I really love it when press releases have a solid grasp on the gameplay and are honest about it.

But the fun doesn’t stop here — check out the rest of the summer lineup: Ecco the Dolphin, Hexic 2, War World, Geon: Emotions, Puzzle Quest: Challenge of the Warlords, Space Giraffe, Streets of Rage 2, and Super Puzzle Fighter II Turbo HD Remix will all be hitting XBLA in the upcoming weeks.

Instead of declaring my everlasting man-love for the future of XBLA, I’ll just say that War World is the only game that doesn’t tickle me fancy. While I’m a little disappointed that I don’t see Undertow, no one can say that this isn’t a solid list. Rock solid.

Hit the jump to find out why Track and Field is a Freudian clusterf*ck, why Grim isn’t writing this post, and the press release.

Track and Field is well and good, but take a look at the marketing rhetoric thrown around the accompanying press release like so much moldy rice at an unholy marriage:

Perfect for whittling away the long days of summer are a bevy of unique sports games …  gamers can log virtual track time and exercise their fingers and thumbs.

It almost sounds like Microsoft wants me to actually go outside and participate in the cardio-vascular equivalent to NASCAR. Then I remember that this is a video game we’re talking about. There’s some sort of psychological trickery going on, but I don’t think I’m sexually repressed enough to wade through it.

Furthermore, I’m well aware that this is Grim’s usual beat, but he’s on vacation. It’s not like it matters, because everyone knows we’re the same person. Rather, we have the ability to fuse together, like flesh and blood Zords to become Grimcist, the most unimpressive blogging force known to man. We’re kind of like Vegetto, minus the drag.

Get ready for hot Arcade nights! Building on last Wednesday’s launch of “Marathon: Durandal” and “Spyglass Board Games,” August and the rest of the summer are shaping up to be scorching hot on Xbox LIVE® Arcade for Xbox 360™. Perfect for whittling away the long days of summer are a bevy of unique sports games, classic and futuristic fighting games, as well as a few other surprises, all of which will be making their way to Xbox LIVE Arcade in the coming weeks.

This Xbox LIVE Arcade Wednesday, gamers can log virtual track time and exercise their fingers and thumbs with the highly anticipated “Track & Field” from Konami. Originally released in 1983, Track & Field was an arcade smash. The updated version for Xbox LIVE Arcade features the same button mashing game mechanic as the original, and now allows for up to four player multiplayer competition on one Xbox 360 or over Xbox LIVE. Clocking in at 400 Microsoft Points, “Track & Field” will be available to download on Xbox LIVE Arcade this Wednesday 8th August beginning at 09:00 GMT.

Other hot games also releasing in August include:

· “Geon: Emotions” (Eidos) Engage in the unique sport of Geon, where you must master a diverse range of emotions to best your opponents.

· “Puzzle Quest: Challenge of the Warlords” (D3Publisher of America, Inc.) Addictive and easy-to-learn, this game integrates story and character progression elements found in RPGs delivering a brand new type of game that pushes the puzzle genre to a whole new level.

· “Streets of Rage 2” (Sega) One of the most popular side-scrolling beat ’em ups of the 90’s gets the Xbox LIVE Arcade treatment, complete with enhanced graphics, sound, achievements and multiplayer modes.

There have been over 45 million Xbox LIVE Arcade game downloads as of July, and the popularity of the service continues to grow. Over 100 games will launch on Xbox LIVE Arcade by year’s end, including dozens of original IPs and classic titles updated for this generation.

Look out for specific game information surrounding each title on Xbox.com in the coming weeks.