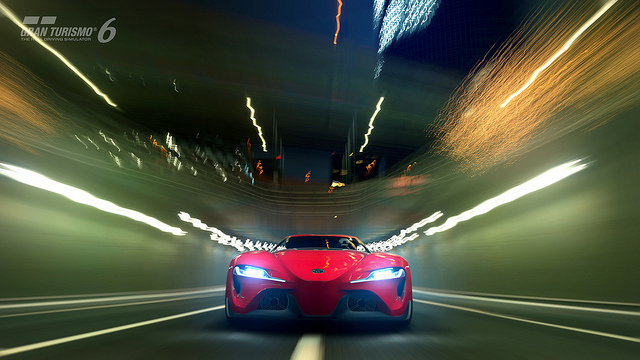 Are you a car person? It’s so weird talking about cars to someone that isn’t a car person. It’s like when someone talks about football to me. I always just picture a televised game in super fast forward, where the damned ball is just going back and forth, back and forth, showing how silly it all would be with some perspective.

But I suppose that isn’t much different than cars going in circles over and over.

Well, if you are a fellow car person, you’ll appreciate that Polyphony Digital has yanked Toyota’s FT-1 Concept straight from the International Auto Show and plopped it right into PS3 racer Gran Turismo 6.

What’s neat is that concept house Calty Design asked Polyphony Digital to to create a digital version of their concept as part of their pitch to Toyota. After seeing the Gran Turismo version of the FT-1, Toyota gave them the nod. Now we get to drive that digital simulation.

What’s even neater is that you’ll be able to drive the FT-1 in Gran Turismo 6 tomorrow. An update will add the car to the game. Sony says that if you rank bronze or better in the FT-1 Laguna Seca challenge, you’ll receive the car. You can also just buy it from the Toyota dealership if you’d like.