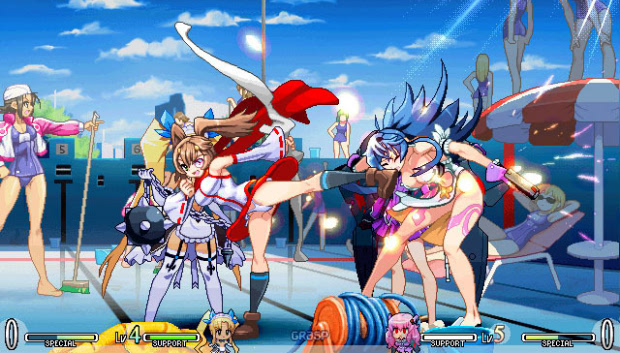 Bored of Street Fighter IV and too cheap to buy BlazBlue: Calamity Trigger? You may want to try Vanguard Princess, a freeware, 2D fighter with an all-girl cast that was quietly released last week. The credits point to someone named Tomoaki Sugeno who, according to his MobyGames profile, has worked on some King of Fighters titles as well as Resident Evil 3.

The 2D sprites are as crisp as any I’ve ever seen and Vanguard Princess seems to have already established itself as a surprisingly deep, albeit chaotic, fighter. I haven’t played it yet (mostly because it kind of seems like a pain in the ass to install properly), but there are already tons of gameplay videos online, even though it’s been out for less than a week. As far as I’ve been able to gather, each character controls differently and there are tons of loli assist characters to help you out.

If you read moonspeak, you can check out Sugeno’s official blog, and you can download the game here (click the blue button). To get it running, follow these instructions. And, to get you started off on the right foot, check out a move list, here.

Hit the jump to see a gameplay video, and check the gallery for some screenshots.