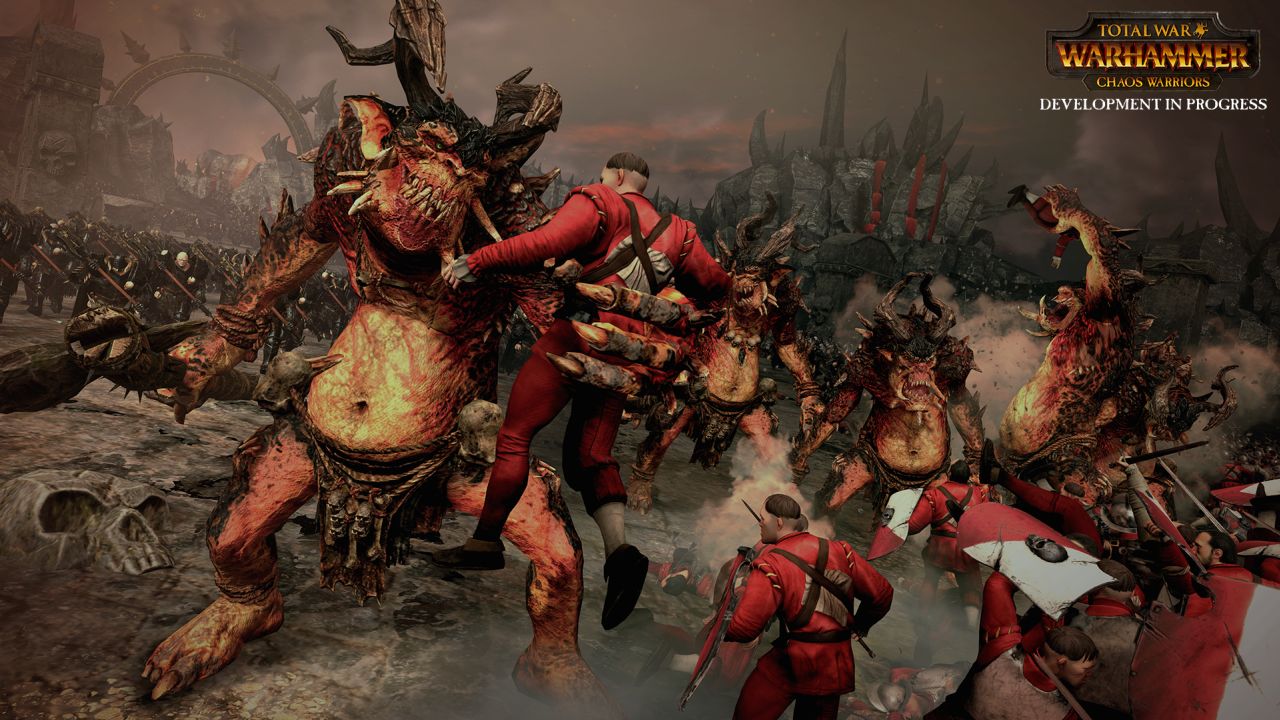 The Total War series is known for its focus on intense real-time combat and simulation-based nation-building gameplay. As one of the more historical games, the series has garnered a lot of respect from fans and many critics alike. But now, the folks at Creative Assembly are set to try something brand new for the series. I attended a Total War event last year where they showed off the first teaser for Total War: Warhammer. But plans changed, and they decided to hold off the announcement till the Spring. And here we are –we’ve now got a brand new Total War title in the works, and it’s set to become a unique entry in the series.

The developers see this as a big departure for the series, as it will allow them to offer some more creative additions to the tried-and-true gameplay the series is known for, and I came away pretty blown away by their brief taste of what Warhammer is like with the Total War treatment. With its rich fantasy setting, and decades of lore to draw from, TW: Warhammer is set to be the most ambitious entry of the series.

Moving away from the historical settings of Rome and Attila, the Warhammer lore opens things up considerably for some intense and incredibly over the top action. Set in the high-fantasy universe, players will be able to choose one of four factions (Empire, Greenskins, Dwarves, and Vampyre) and build their nations, either through diplomacy, economics, or the raw might of their military forces. When things come to blows, each faction possesses its own unique style of combat and tactics that the opposing armies will have to deal with.

The combat mechanics during battles have been greatly expanded. Units can utilize more moves and abilities from close range attacks to long-range tactics through magic or muskets. Along with the Hero characters, which can be leveled up and imbued with new skills to boost their units, players will be able to summon monsters and other creations to help their armies in a pinch. During one battle between the Empire and Greenskins, one of summoned a massive spider known as Arcanarok, which spawned mini-spiders that mowed down enemy units. I was very impressed with the sense of scale and the pace. I’m interested in seeing more of what the units can do once developed further.

Rest assured, the nation-building gameplay from past titles is still present in Warhammer. But naturally, how each of the factions will go about expanding its civilization will vary. As each faction possesses its own unique culture, traditional diplomacy and negotiation may not be as effective as the swing of an ax, and some factions will be more focused on engagements than others. For the Empire, it’ll have the traditional and more civilized routes for expansion with politics, trade, and economics as its biggest tools. But when it comes to showing off military might, the Empire will utilize its siege cannons and Demi-grifs to lay waste to invaders.

For the Greenskins (Orcs), players will have to use brute force and cunning to expand their own empire. As Orcs don’t really have much interest for diplomacy and the political aspects of nation-building, they choose the more direct approach to get what they want. While they possess the standard warrior and shaman classes, the latter who can utilize spells to summon giant constructs to stomp their foes, they also make use of kamikaze goblins that use leather wings to fly into enemy units. Launching catapults, they can be manually aimed while in flight for precision targeting. 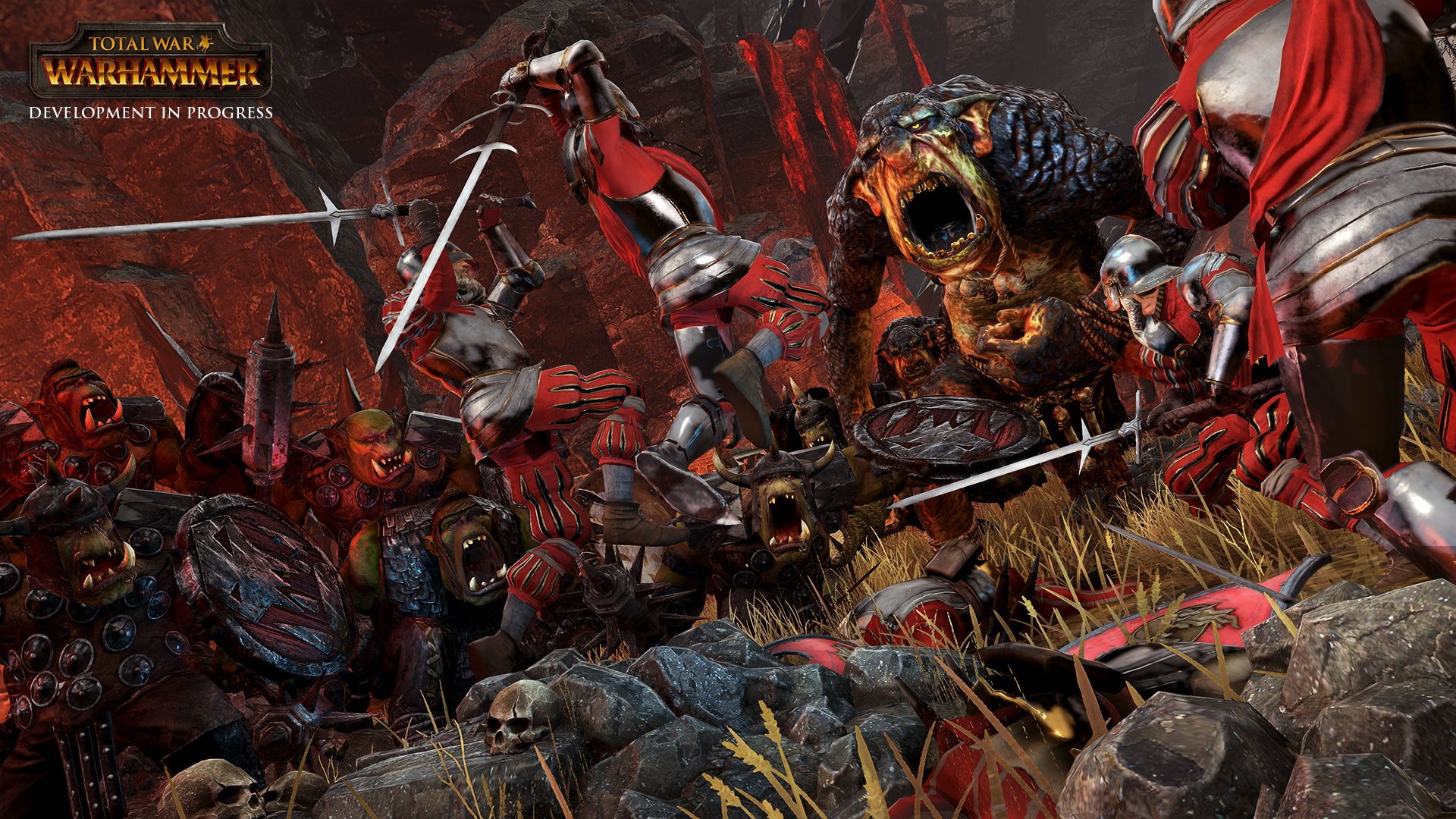 While the title is in pre-alpha, and the build we saw was hands-off, I was incredibly impressed with what I saw. The new visual aesthetic and a rich setting offers so much potential for what the Total War series can do within the fantasy genre. As you can spend countless hours with just one faction, building them up and taking down opposing forces, I’m very interested in seeing how much lore they can fit into this title. Though Creative Assembly was very hesitant to share any details about the Dwarf and Vampyre factions, it was very clear in stating that all of the factions will be very developed and possess their own unique cultures that will alter how they function on the world stage.

It’s still a ways off, but the folks at Creative Assembly are on track with developing something unique. Obviously, it’s quite a departure for what the series has done before, but it’s still very much a Total War title through and through.