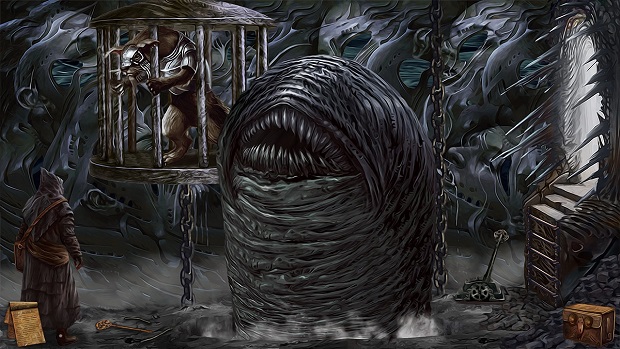 I’ve seen a lot of weird shit, but Poland-based OhNoo Studio’s macabre point-and-click adventure Tormentum ranks up there with some of the most horrifyingly surreal stuff I’ve had the pleasure of being exposed to on the PC.

In just over a minute and a half of trailer footage, I’m pretty sure that I witnessed a corpse being rhythmically “penetrated” by some sort of medieval torture-porn machine made up of grimy swords; a gargantuan, sightless hell-worm rising from the abyss; and what looked like a light-beam puzzle that forms a glowing pentagram when solved. Color me intrigued.

According to the OhNoo, Tormentum takes place in “a dark hopeless world”  populated by “grim characters and hideous creatures.” You’ll play the role of a nameless protagonist who awakens in a metal cage suspended below what looks like some sort of demonic dirigible.

The only thing the character can recall is a faint image of a statue of a woman surrounded by a “forest of stone hands.” The hero, on a quest to discover the truth about himself, will travel through three separate lands, which the studio reckons will be comprised of around 80 locations.

Destructoid’s Alasdair Duncan is quoted during the trailer as saying he felt the game was like “H. R. Giger and all of the covers of your favorite metal albums had some freakish baby.” I’d say that’s a damned accurate description. However, I can see hints of Salvador Dali in it, myself. Well, more accurately: Salvador Dali after pulling an all-nighter with a gutful of Jimson weed.

The game releases on March 4, but if you’re eager to get a taste of this point-and-click weirdness before then, you can pick up the demo they’ve made available on Steam right now.