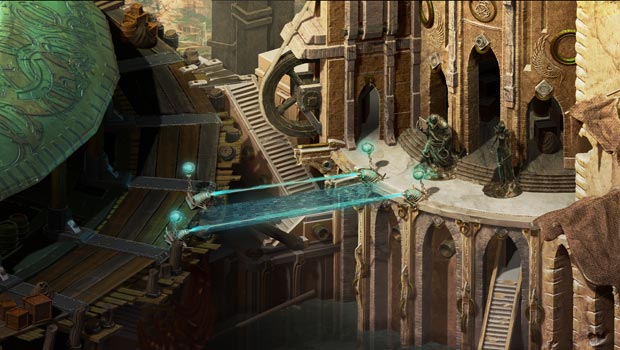 Maybe you’ve been following the slew of information being released by inXile Entertainment about their recently-funded title, Torment: Tides of Numenera. While the release date is quite some time off, we’ve got something to whet your appetite: a full-length track that accompanies the Sagus Cliffs area courtesy of composer Mark Morgan.

While the track starts off on the emotional side, which I think fits the visuals and back story of the Sagus Cliffs, give it some time to warm up. It really takes off and gets a pretty serious badass vibe going.

Check out the full-length sample below along with a description of the Sagus Cliffs area to give you even more of a visual and let us know what you think so far of the game and its music.

“The city of Sagus Cliffs borders a large inland sea, winding its way down to the water through switchbacks and cutout caverns. The city is vast, both vertically and horizontally, exhibiting a wide variety of architectural styles as its layers were stacked upon each other across the ages. Some buildings are built out far over the water below, precariously holding through elaborate winches, pulleys, and wires. Some have no such support, practically hovering under their own power. But the old ways still hold – literally – sometimes clinging to the last scavenged beams on which they were originally erected, with bridges of coherent light helping to hold together the city’s economy. At the base of the cliff, the ocean crashes and swirls around the rubble of fallen houses, the city extending downward even here – with some structures diving beneath the waves.”

Filed under... #Exclusive on Destructoid#Soundtrack#Torment: Tides of Numenera