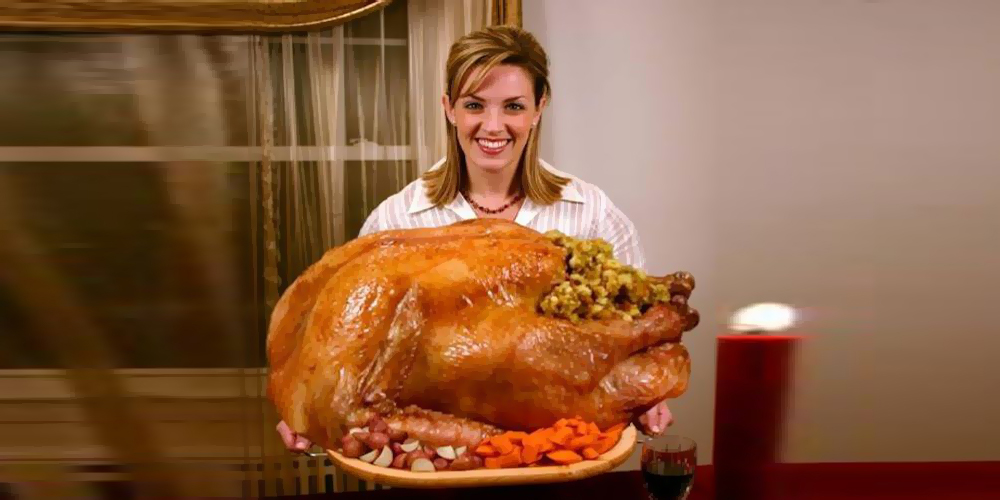 Thanksgiving is happening in parts of the world today, and for some, it’s quite a struggle. The holiday has the tendency to bring people together who often avoid each other for the bulk of the year, with the hope of finding a sense of closeness and empathy. These hopes are often dashed by the cold reality that the family members in question only have surface level compatibility. Digging any deeper than “Hey, did you see the game last night?” or “Wow, I can’t believe Walking Dead hasn’t been canceled yet!” only leads to anxiety, conflict, disillusionment, and ultimately, a deep hatred of the holiday and everyone involved in it.

“Thankfully” for you, dear reader, I have the solution to all your problems. Below you will find a series of handy conversation starters that both bring exciting, holiday-appropriate information to the “table” and aid you in pivoting away from more high risk topics that others may try “stuffing” into your “face”.

“Wow, I had no idea that you hated interracial relationships that much Uncle Larry! I bet you’ll enjoy Battle Chef Brigade. It’s about getting objects of the same color to combine while making a delicious meal in the process, just like you did when you made these yummy white bread and mayonnaise sandwiches for today’s feast.”

“Oh Jeez Little Cousin Sally, I had no idea that Hillary Clinton was secretly a man and also a reptilian shapeshifter from another planet. Funny you should mention that, because one of my favorite games about eating turkey is called Metal Slug 3. If you eat enough, your shape shifts to that of a fat person, and your bullets get fat as well ha ha ha!”

“You think only liberals and foreigners smoke pot, and that all real Americans should drink hard liquor instead, Grandpa David? That comment reminds me a lot of Tingle’s Freshly Picked Rosy Ruppeland, a first party Nintendo DS game localized in English only in Europe where you can cook food in a food “pot”. Since we’re all eating food now, why don’t you sit back and listen as I quote large sections of the game for you verbatim? Let me just boot up a walk-through on my smart phone…”

“You’re voting for a man who admitted to pursuing romantic relationships with teenage girls when he was already in his 30s, Aunt Edna? Sounds like something straight out of Metal Gear Solid 3: Snake Eater, a game that also has politics and a snake in the grass in it. But that’s not to say that I think your favorite politician is a “snake in the grass” just because he lusts after teens though. It’s just a figure of speech that coincidentally came up in this conversation right now. Also in the game, you can eat the snake, much like how you are  eating a ham hock right in front of me. Maybe we should start calling you Metal Gear Edna 3: Ham Hock Eater wouldn’t that be funny?!”

“Holy smokes Cousin George, you believe Alex Jones when he says that Obama is a biblical devil, as proven by the fact that he attracts flies and smells of sulfur? That’s so interesting, because there is a PS1 game called Tobal 2 that was only released in Japan where you can beat up a devil, get some meat from it, then cook the meat in a fire in order to make it more edible. I bet it’s almost as edible as this pumpkin spice taco that I brought you from the market!”

“Oh no, Francine is vomiting! In River City Ransom: Underground, there is a character who can over eat to the point where he vomits, and if player two selects the right character, they will vomit too at the sight of him vomiting. Projectile Vomit is a pretty effective attack in that game, but in real life, sometimes it’s a sign of serious illness so lets call an ambulance if it continues for an hour or more.”

“You believe that the holocaust was faked in order to distract people from the real threat which is the potential repeal of the 2nd amendment, Father? That sounds a lot like Monster Hunter 3, a game where the monsters are the real threat, but it’s easy to get distracted by fun diversions like raising a pig to become your best friend. Now don’t pig out on that potato salad, Dad! Wouldn’t want your veins to get clogged from all the cholesterol and for you to have a near-fatal stroke, leading you losing your ability to speak ever again…”

“You’ve given up on sleeping with Dad ever again and are instead just going to google dull nudes in order to satisfy your urge for sexual intimacy, Mother? Well in Parappa the Rapper 2, the plot is all about “noodles”, which is sort of an anagram of “dull-nudes”. It’s also has some pretty sexually suggestive content, like the “slurp it, suck it, Iknow we all like it” lyric in stage 7 . Maybe we can go to that new Ramen place downtown for Thanksgiving next year, I bet they’re open…”

[Note: You may have to change the names in these scripted conversation starters so that they are a better fit with the family members that you are addressing at the time. If you call your racist sister “Uncle Larry” as written in the paragraph above, that may break immersion and lead to the family to lose their suspension of disbelief. That said, breaking immersion isn’t always a bad thing, especially if you want to make it clear that you don’t want to talk to someone, so use your own discretion.]