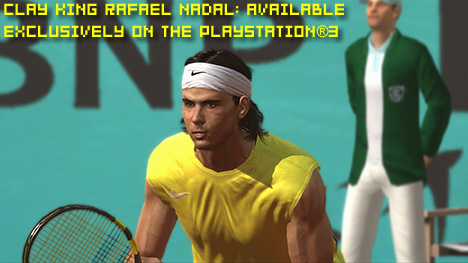 If you’ve been jonesing for some videogame tennis action, then jones no longer, my friend. Yesterday, 2K Sports sent out a press release (after the jump, as always) saying that Top Spin 3 has gone gold on all platforms. So whether you are a proponent of the ten-year console life cycle (PS3), love to let loose on Live (360), prefer more control interactivity (Wii), or partake in on-the-go gaming (DS), you’ll be able to serve up some aces starting on Tuesday, June 24th.

This release date only applies to North America; the game has been out in Europe and Australia since May 23rd (it’ll be out in Europe next Friday, June 20th). Along with the press release, 2K Sports has provided 20 new screenshots: one from the 360 version; three from the PS3 featuring Rafael Nadal; six from the Wii version; and ten from the DS version.

If you want even more images, check here for some from the HD versions, and here for shots from the DS version. For more specifics on the game, hit up my developer game notes, where you can find another bunch of screens from the 360 version of the game. Finally, for a couple of photos of Maria Sharapova (just because), head here. Okay, I’m done whoring my prior posts now. Just as a heads-up, you can expect a Destructoid review of Top Spin 3 soon after the game’s North American release.

[Update: Top Spin 3 actually won’t be out in Europe until June 20th. The article has been changed to reflect this.]

Top Spin 3 offers a wide variety of gameplay and features, including situation-specific behaviors, revamped audio with enhanced crowd reaction, and precise controls that fans can easily pick up and play while still providing the most genuine tennis experience possible. All-new Evolutionary Visuals™ showcase the intensity of the game as players sweat, demonstrate fatigue and accumulate grass and clay stains on their clothing over the course of a match, while competing at courts that have dynamic weather changes. Competitive players will also be able to create matches online and test their skills against friends or other ranked players around the world via singles or doubles in Exhibition, Custom, or World Tour Matches.

Top Spin 3 has been rated E for Everyone by the ESRB. For more information on Top Spin 3, visit www.topspin3thegame.com.

* Legends not available on all platforms