As good of a gaming computer as you might have, whether you spent $400 or $2000, its visual output will more or less look like crap unless you have a good monitor to show off what it can do. Today, I’m going to rank the top five monitors for your money, based on a budget of around $200.

To make these rankings, I not only took price into factor but also contrast, brightness, screen size (yes, size does matter), resolution, screen type, and extra toys as well. I limited my ranking to a budget of $200 or less, so some of the more popular brands such as Samsung were overlooked. (While they have good monitors at a higher price, they do not have any monitors that can match up to the ones I found in this price range.) In addition to this, all 1920×1200 monitors were disregarded, as their general price range is above the allotted budget.

Before we begin, one thing that is commonly misunderstood by a lot of people is the difference between an LCD screen and a LED screen. In a nutshell, the big difference is how they’re lit (thank you, Captain Obvious). LCD has one white light in the back that shines through different filters, creating the colors you see on the screen. LED. on the other hand, has different colored lights with no filters. This allows the LED screen to actually dim parts of the screen and create a pure black instead of that really dark gray we’re all used to (LCD screens can’t do that). In addition to the increased color accuracy, LED screens also offer increased viewing angles and thinner screens, and they use 40% less power than LCD screens. However, the downside is that they cost about 50% more than a similar LCD screen. Click here to read more about this.

In addition to the LED/LCD misconception, there is also a specification that a lot of manufacturers use to really mislead their customers: contrast ratio. There’s no set standard of measure for contrast ratio, which makes it exceedingly difficult to tell how good a ratio is. My best suggestion is to look at the monitors side by side in person if you can. If not, just look at reviews of each product and decide for yourself.

Anyway, if you take a look in the table below, you’ll see both DC and ASCR along with DiC. First off, DC stands for Dynamic Contrast — it’s somewhat of a standard that companies use, but that’s not always the case. ASCR stands for ASUS Smart Contrast Ratio, and is pretty much something ASUS made up to more or less hide the real dynamic contrast their screens have. However, they’ve gotten decent reviews, so I would peg them to be about average. It’s something really hard to tell, and it’s a little sketchy that they don’t release these numbers — it suggests they have something to hide. One thing I found pretty odd on the LG monitor was that their DC didn’t mean dynamic contrast like the rest did, but digital contrast instead which means that we have yet another bogus term to worry about, which is why I labeled it DiC instead of DC. Finally, the number in parenthesis is the static contrast ratio, which seems to be more or less standard from what I’ve seen at 1000:1. What worries me is that this statistic couldn’t be found on some of the monitors, which is what makes me the most suspicious that they might be hiding something. I guess the bottom line is, ignore this statistic, and judge what you can from the rest of the specs given. 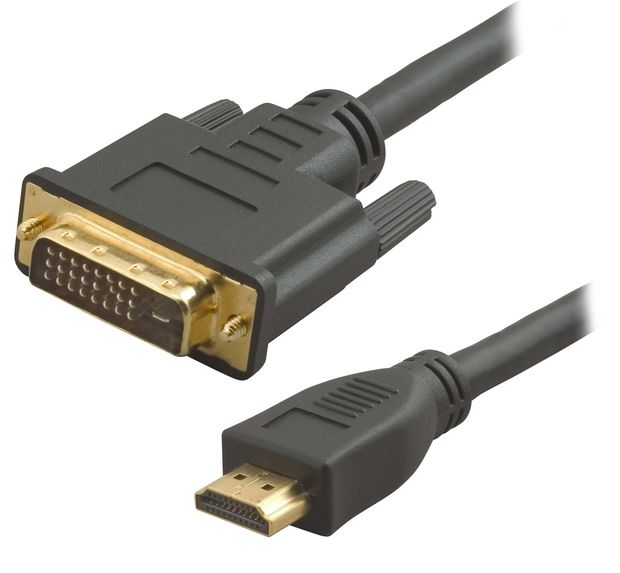 For all of you who don’t really know the different video inputs, I figured it would be nice to have some quick information on it. VGA and D-Sub are both analog signals, which are becoming rarer and rarer in a digital age, and are generally thrown onto a monitor just for those people who still cling to the Stone Age. DVI and HDMI are the real powerhouses that are taking the stage at the moment. They both have the same video quality, but the difference is that HDMI has sound included. So if your monitor has speakers built in, you don’t have to worry about plugging in a separate auxiliary audio cable to plug in. These inputs are digital and can carry much more information to the monitor, in addition to not making it convert the digital signal that your computer sends out into an analog signal like a VGA or D-sub cable must do.

Now, let’s move on to the rankings! 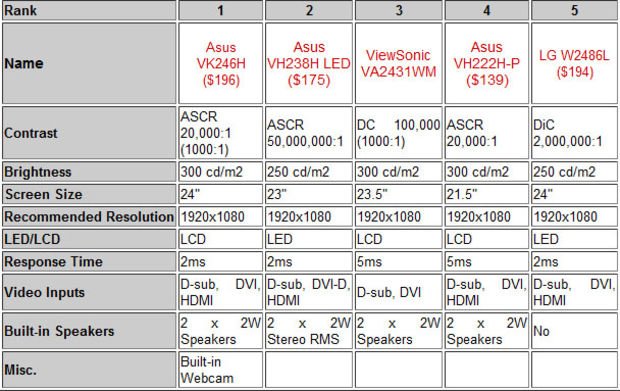 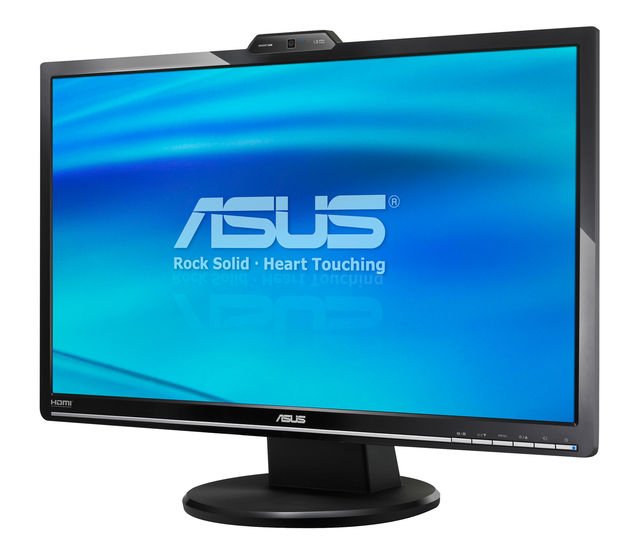 I picked the VK246H as my first choice for a couple of different reasons. Not only does it sport a nice, large 24″ screen, but it’s also pretty inexpensive at only $196, considering what it comes with. In addition to the phenomenal pricing, it is 1080p, sports two built-in 2W speakers, and a built-in webcam. Don’t like the idea that it has a webcam attached? Buy the camera-less variant for about the same price. Oh, did I also mention that it has a 2ms response time? This will reduce any ghosting you might experience, which is a big deal for gamers. However, because these values aren’t absolute, you should probably expect to see a slightly higher response time.

There are some things that could be better about this monitor, however. For one, it’s an LCD screen, so you’ll lose some of the contrast that comes with LED. That also means that you’re only really going to get mediocre color accuracy with this monitor. Fortunately, the average eye probably won’t be able to tell the difference.

I picked this one after the VK246H mainly because of the reduction in size and brightness, though I don’t think the difference would be very noticeable. This monitor is LED instead of LCD, so it was a pretty close call in my eyes. For all of you who don’t want a built-in webcam, I’d go with this option; I could see someone going either way, especially considering the overwhelmingly better color contrast. I’ll admit that I had a hard time deciding and only picked the other monitor because of the size and webcam.

The Viewsonic VA2431wm is actually better than the ASUS VH238H that I mentioned above in some respects such as size and brightness, except that it loses a little in terms of response time and that it lacks the HDMI port. In addition to this, it is only a LCD screen, where as the ASUS is an LED. However for five dollars less, it might be worth your money to take the hit for those nice perks.

With a smaller screen and a 5ms response time, the VH222H-P is my third choice only because of its relatively attractive price. The response time pretty much rules it out for any serious gamers. However, for all of the more casual gaming, home, and office users, this monitor will do fine. Honestly, I don’t know a lot of people who can really tell a huge difference in 3ms.

EDIT: I apologize so much! I don’t know how I goofed up on the previous link here, and the image above. I would replace the image above, but I don’t have the source code from the table that I have above with me (it’s an image right now), because I’m on vacation right now. Either way, the specs are as follows…23″ LED backlight screen, 1920×1080 resolution, 250 cd/m2 brightness, DC 5,000,000:1 contrast, response time of 5ms, D-Sub, DVI, and HDMI video inputs, and no built-in speakers.

While it is a good monitor, the price really put me off because I feel you could get better deal on another monitor. However, it does have a good screen size, resolution, contrast, and decent brightness as long as looking quite sharp.

Again, I apologize for the goof-up with the table and such.

All of the top three choices are excellent monitors and I highly recommend all three. You will have to decide for yourself which is the best for you personally. I’d probably buy the Asus VH222H-P for a home or office computer because of the slower response time and the low price. I would only recommend LG W2486L if you really want a nice LED screen. Still, it was ranked above the Acer S201HL because of the Acer’s low resolution and small screen size.

P.S. Special thanks to those that contributed to my research in my community blog. What other kinds of PC hardware coverage would you like to see on Destructoid? Let us know!