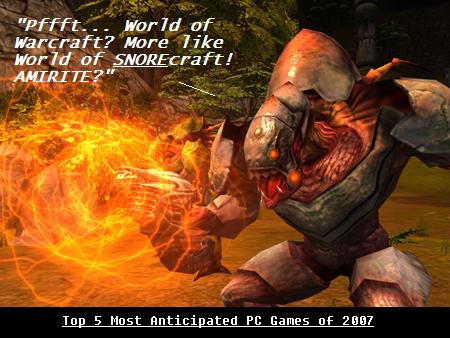 It really is no secret that 2007 is going to be a huge year for PC gaming. Already we have seen the release of The Burning Crusade expansion for World of Warcraft — so that definitely sets the stage quite nicely for PC gaming in ’07.

But who are the true standout players going to be this year? Who will step up to the plate and deliver gaming experiences that will be talked about (and played) for years to come? It’s hard to say, really, but I’ve compiled a small list of five games that I feel will shape this year in PC gaming (Burning Crusade excluded.)

Hit the jump for the inside line on the best that is yet to come.

Hellgate: London is on the minds of many gamers who fell in love with the Diablo series of games. The main reason why is because the majority of the development team who are spearheading this project over at Flagship are former team members of the Diablo dev crew. Many crave the release of Diablo III, but this is certainly the next best thing based on the team at work here. Hellgate: London features first and third-person action with a large emphasis on character development and dungeon crawling through randomly-generated areas.

Crysis is obviously being developed by Crytek, featuring the beautiful, robust and downright jaw-dropping CryEngine2 which produces by far some of the best visuals in a first-person shooter. Ever. However, until some serious tweaks are made to said engine, we might be looking at a beautiful slideshow lagfest if our computers are not being pumped full of anabolic steroids. Regardless, Crysis will easily be one to watch in ’07.

Do you remember playing System Shock and System Shock 2 years ago? Do you remember how afraid you were alone awaiting your inevitable meeting with Shodan? If you don’t, well… you missed out on some good times. But fear not! BioShock is here to be somewhat of a spiritual successor to the System Shock series. It’s graphics may not be as ridiculous as Crysis, but this game is definitely a pleasure to look at. System Shock was also known for its incredible gameplay depth, which I’m sure that BioShock won’t skimp on in the least. And for you Xbox 360 owners out there who don’t have a buff enough PC, you can also score this game, too.

Yep, we were waiting for this one. UT2007 is now known officially as Unreal Tournament III. There’s not really much more that needs to be said about this one except for get your trigger-fingers ready for the ultimate break-neck shooter to be reborn using the Unreal 3 engine. You can snag this one for your PC, Xbox 360, and for the six of you out there who actually own and play the PS3, you can get it on there, too.

…And I’ve saved the best for last…

Richard “Lord British” Garriott, the mastermind and legendary creator of the Ultima series, has a new treat for us. Tabula Rasa is the upcoming MMO masterwork that features some of the most promising gameplay that I’ve seen. The game has not gained a lot of press because of how secretive the dev team has been about keeping a large majority of the details locked up nice and tight. However, I honestly see Tabula Rasa doing to MMOs what Ultima did for RPGs. If you haven’t already read every tidbit of info that has found its way to the internet on this game by now, I suggest you get started.

In summary, it looks like the entire theme of this list was sci-fi inspired shooters with RPG influences (well, except for Crysis.) However, no one can deny that all of these games look outstanding regardless of the coincidence that they tend to revolve around post-apocalypitc warfare. Nevertheless, I still believe that ’07 will be an amazing year for the PC gamer, including these games and many others that are not on this list.