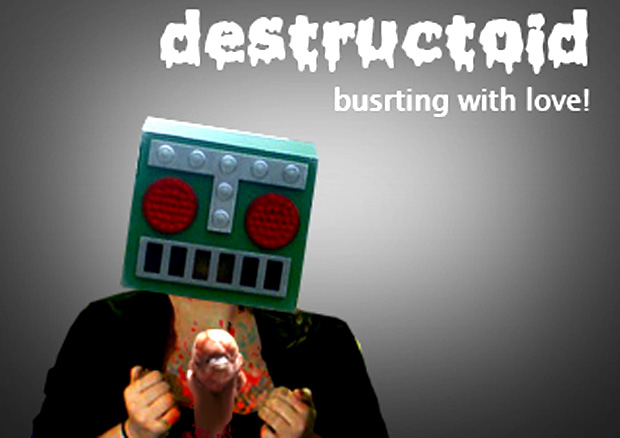 Last year’s list was alright I guess, but I tried to do better this time around. This year I got a lot more input from the other Dtoid editors, expanded the total film count from ten to twenty, and will be using header images from our readers’ excellent entries into this contest. This one comes from Dtoid member Clov3r, and I think it’s pretty awesome.

So enough with the hub-bub, let the games begin. Hit the jump for entries twenty through eleven in this years big list of horror movies that we wish were videogames.

[WARNING: The videos you are about to see contain images too SHOCKING for most viewers. Those with severe heart problems, nervous conditions, or pregnancy are advised to proceed with EXTREME CAUTION, especially while at work.]

It’s probably not wise to even try and follow Patton Owsalt when talking about Dead Bed: The bed that eats people, but I guess I’ll try.

This movie will hurt you. It makes me so sad. Watching it is like listening to someone with Alzheimer’s disease talk about accounting. It’s confusing, disjointed, slightly disturbing, but most of all, boring. That clip there is actually the entire movie condensed down to ten minutes, and it actually makes more sense with 110 minutes cut out.

Number nineteen on our list is a personal favorite of mine, but it’s tough to envision it as a videogame. I suppose it would make a good point-and-click adventure game, or maybe a Clock Tower style “escape from the bad man” 3D adventure. Hell, they could even go the Zombies ate my neighbors route, and I’d still pick this one up.

Left 4 Dead with giant rabbits, that’s how I imagine the Night of the Lepus game would come together. And why not? Zombies are getting a little over exposed these days, but killer rabbits in videogames remain relatively unexplored. If Ubi-Soft was involved, they could even make it a Raving Rabbids cross over.

Realistic Rabbids rampaging the countryside could make a better game than the upcoming Rabbids Go Home.

[Warning: The above video contains coarse language and smooth stool not appropriate for those at work. Viewer discretion is advised]

Monsturd makes me feel awful. It’s the only movie I’ve ever seen to fully embrace the natural human repulsion to dookies, and exploit it for the sake of horror. Anyone who dares get close to a toilet must risk death at the “hands” of the Monsturd. The movie also has some other gross parts, like a scene where everyone pukes, and some psuedo-zombie type corpses getting stabbed.

To make the jump into videogame land, Monsturd would have extrapolated off those ideas a whole lot. I envision a Bioshock-type scenario where you explore a vast underground sewer system, taking on grunt-like puking sheriffs and maggot zombies along the way, while harvesting the poop from Big Turds and little turdies.

They can mod Bioshock on the PC, right? Well, this is how it should be done.

[Warning: The above video contains soapy boobs not appropriate for those at work. Viewer discretion is advised]

I haven’t seen this movie myself, but Nick Chester tells me it’s awesome. Well, he never actually said that, but that’s what I took from our conversation. He also said that the game of Ghoulies III should play like Bully, except with more Ghoulies, beer cans, and boss fights. Sounds good to me.

Clearly, that guy with the face for a stomach is a fan of the last boss from Ghosts ‘N Goblins, which makes it all the more easy to see how this one could fit into the world of videogames.

Invasion of the Body Snatchers almost made the list this year, but it was missing three things; Danny Aiello, Garrett Morris, and a marshmallow-y treat that makes your mouth open big enough to fit a whole watermelon in there. Thankfully, we’ve got The Stuff to make up for those short comings.

This movie really is incredible (in a bad way), and it could make an incredible videogame (in a good way). Take everything you like Resident Evil 4, add blob monsters, white vomit, and an incredible jingle, and you have a guaranteed million seller.

You can watch the whole movie on Youtube starting here.

[Warning: The above video contains really gross stuff, bad language, butts, and maybe a boob- not appropriate for those at work. Viewer discretion is advised]

Oh Jesus-Mary-and-Joseph, this movie is so gross. You may think that old fashioned special effects are old news, with modern CGI and all that has outdone what they could do in the 80’s, but this clip would prove you wrong. Every time I see it, I get a case of the yuckies. You can start watching it here if you don’t believe me.

If they could pull it off without getting an AO rating, I’d sure as hell buy it.

There was a time when I really believed that there was going to be a Blacula game, and I was actually excited for it. Why wouldn’t I be? An open world environment mixed with super-powered gameplay worked pretty well with InFamous and Protoype, but both of those games took themselves too seriously for me to really get behind them. What if they had more stereotypes, funk music, bad acting, and monstrous sideburns?

Get on that, Renegade Kid.

While playing GTA or Saint’s Row or one of those new-fashioned car stealing videogames, have you ever thought to yourself “Man, wouldn’t it suck if I were one of the pedestrians at the end of this game, constantly living in fear of being run over by me?” That’s how I imagine a Maximum Overdrive game to work.

You play as Emilio or the Lisa Simpson-lady while trying to survive in a city where every car in town wants to run you over. Scratch that, make it everything wants to run you over, cars, trucks, boats, planes, lawn mowers, everything. You’ve got guns, and friends if you can make them, but beyond that, it’s you against the machines. Doesn’t that sound more interesting than your average survival horror outing?

Also, that Green Goblin-headed truck is totally boss. Again, if you want, you can watch the whole movie starting here.

From the the writer and director of #20 on our list comes Phantasm, the first film in arguably one of the all time great sci-fi/horror film series of the 20th century. There were a lot of movies that were going to make it onto this list: Re-Animator (for the yucky science and reanimated corpses) The Brood (for the killer midgets) and Suspiria (for the disturbing delirium) but in the end, they all needed to be cut for redundancy’s sake. Phantasm has all those things, and more.

When it comes to a bestiary, the game for Phantasm is already all set. You’ve got the midget zombies, dead people, dream-sequence things, the tall man, and of course, the floating sliver ball. That thing used to scare the crap out of me. I mean, how can you stop it? It’s like a flying, steel type, ghost-type, dragon-type pokemon. It has no weaknesses, and no matter where you go, no matter how many doors there are between you, it will kill you. It will break through every door, every wall it has to, and it will kill you.

I’m scaring myself just thinking about it.

So, what do you think of the list so far? Anything you like? Don’t like? Well, if I missed anything, maybe you’ll see it on part 2 tomorrow, where we’ll take a look at entries ten through one.