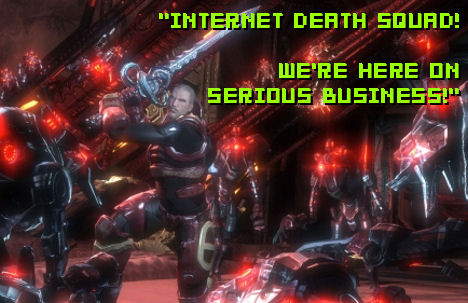 Ontario newspaper the St. Catharines Standard has interviewed local developer Denis Dyack about his upcoming controversial 360 title, Too Human. The interview discusses plans for Silicon Knights’ expansion should the game sell well, along with the troubled development process that has surrounded Too Human‘s lengthy germination.

Of particular note is the attention that the article pays to press coverage of Too Human. In doing this, your very own narrator Jim Sterling has been made to look like a total arsehole in one of the funniest quotes that have ever been attributed to me:

Still, it’s hard to shake the negative image some avid gamers have of Too Human — and that’s troubling Dyack.

Video game bloggers have been relentless, and sometimes less than kind.

“I still have a tiny sliver of hope for Too Human, but I must admit that the hope is wearing just a mite bit thin,” Jim Sterling, a blogger with Destructoid, The Hardcore Gamers Community, wrote last fall.

“We can but sit tight though, those few of us who still really care about the game, and hope that when this demo ‘speaks for itself,’ it doesn’t say, “I’m a problematic, over-developed piece of wank.”

I couldn’t help but laugh when I saw that a paper had quoted me, least of all because of the term “over-developed piece of wank.” Do you think I am being too unkind to Denis and his team? Is such skepticism about a game a bad or a good thing, do you think? As troubled as Dyack supposedly is, however, he still remains confident in his product.

“If Too Human is perceived for what it is, and people look at it, I think it will do extremely well,” Dyack retorts to the cynics. “We’re in a really strange position, because most games are released with a ton of hype. Generally, previews don’t say anything negative at all.” Well, Mr. Dyack, pretty soon those previews will turn into reviews, and I promise you that the less-than-kind Destructoid will have one. I hope that what we review is anything but wank, though.