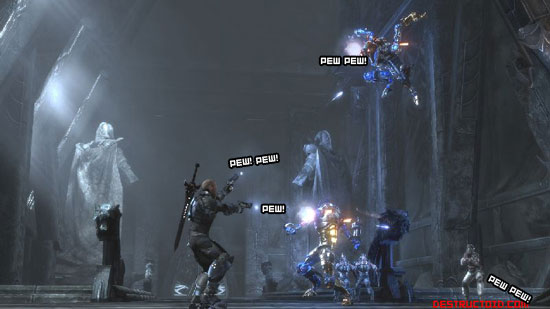 The last time we really heard about Too Human, the game’s developer, Silicon Knights, was throwing legal mud at Epic Games over Unreal Engine 3. I think a few of us might have forgotten that there was an actual game at the heart of that matter.

Well, it’s back, and there’s a lot of it to see. Over 20 new screenshots of the game have landed in our mailbox today, and we’re thrilled about it. So thrilled, we’re going to post them all, and let you guys make nasty remarks about how they look, if that’s your thing. Or, you can go on and on about how the game looks gorgeous, and despite bad early press, this your most anticipated Xbox 360 game to date.

Either way, we’ll be posting “Too Human still coming out, we’ve got too much concept art to prove it” later this evening, so save some of that excitement (or profanity) for later.