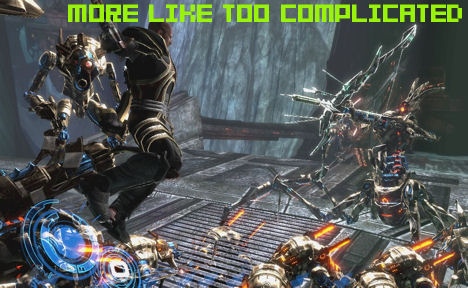 With Too Human‘s release date fast approaching, it seems that Denis Dyack’s mouth is running into overdrive. According to Silicon Knights’ chief demagogue, people who dislike Too Human only do so because the game is far too innovative and amazing for their tiny brains to comprehend.

“What we’re also seeing is for the people who don’t like it, generally just don’t get it.” explains Dyack, kindly telling me why I hated the demo. “And it’s because we’ve created something so innovative and different. It’s ironic, it just shows that human nature of if you don’t understand something, you immediately attack it. It’s pretty interesting in that regard.”

That HAS to be the reason, Denis. We are just too stupid to comprehend the greatness that is Too Human, and if we don’t like it, it’s because we fear the terrifyingly brilliant changes that Too Human has made to the action genre — such innovation as loot drops, character classes, leveling up and bad camera angles. No game has EVER featured such inventive magnificence before. You’re turning this industry on its head, Dyack!

Color me a convert, and a man now happily willing to bow before Denis Dyack’s almighty lecturn. I just had no idea Too Human was so innovative that the human mind is yet to evolve to a point where it can appreciate such complexity. Also, nobody understood the innovation that was Lair, either.