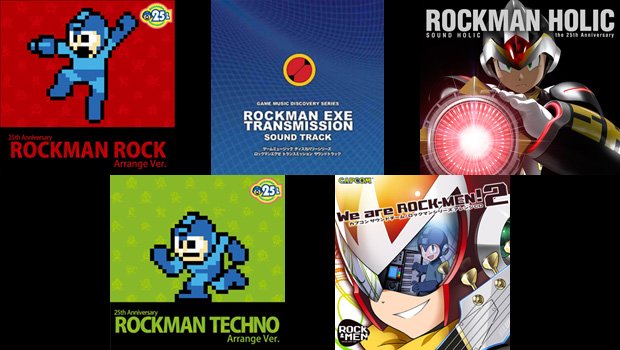 You would think with the deluge of Mega Man merchandise in recent months that the franchise was celebrating some kind of anniversary or whatever. Bandai is poised to release Classic Mega Man in its D-Arts figurine line, an expanded edition of Mega Man Official Complete Works will be published soon, and the music of Mega Man 1–10 was compiled into one giant Rockcan.

That’s not all! No less than five new albums are scheduled for the fall. This past week on October 10, a pair of 25th Anniversary Rockman CDs hit the scene. Coming in “Rock” and “Techno” flavors at ¥3150 (over $40) each, these albums contain contributions by notable Japanese composers, such as Yoshitaka Hirota (Shadow Hearts), Takeshi Hama (Devil May Cry), Kenji Ito (SaGa), Hitoshi Sakimoto (Final Fantasy XII), and many more.

Out of left field is the Rockman EXE Transmission Soundtrack on November 2 for ¥2625 (about $33.50). The 2003 GameCube game, better known as Mega Man Network Transmission out West, never received an official OST from Capcom. Co-composer Shinji Hosoe (also known for his recent work on Nine Hours, Nine Persons, Nine Doors) was finally able to obtain the license to release this through his music company SuperSweep.

Finally, We Are ROCK-MEN! 2 and ROCKMAN HOLIC both arrive on December 19 for ¥2100 (about $26.75) and ¥1980 (about $25.25) respectively. ROCK-MEN! 2 is a follow-up to last year’s We Are ROCK-MEN!, covers of Classic, X, and Legends tunes by an in-house Capcom band. HOLIC will predominantly feature vocal arrangements in jazz, rock, and dance styles, performed by doujin artists working with the SOUND HOLIC music label.

Even for an avid Mega Man nut like myself, this avalanche of goodies borders on excessive. Not that I won’t get my hands on each item eventually, but Capcom isn’t giving me a break! You know what’s missing from the celebration, though?

I know that Rockman Xover is coming soon, but even if — and that’s a huge “if” — it winds up not being complete garbage, I can’t picture it making any waves in the gaming community. And with Capcom’s Senior Vice-President Christian Svensson telling us to “keep expectations in check” regarding a new game announcement, the outlook doesn’t look rosy.

I’ve been thinking about this over the past few months, and I’m no longer sure I even want Capcom to announce a new Mega Man game. The company hasn’t exactly done much to inspire confidence in any of its output outside of maybe Monster Hunter. Whether it’s on-disc DLC in Street Fighter X Tekken, an update to Marvel vs. Capcom 3 not even a full year after the original’s release, the negative critical reception of Resident Evil 6, the failure to properly sell fans on what’s shaping to be a decent game in DmC, or the continued insistence that Lost Planet is anything better than a middle-of-the-road series, Capcom seems to have lost all direction.

When the most exciting product in a company’s lineup is an HD remaster of a pair of niche fighting games, what kind of message does that send?