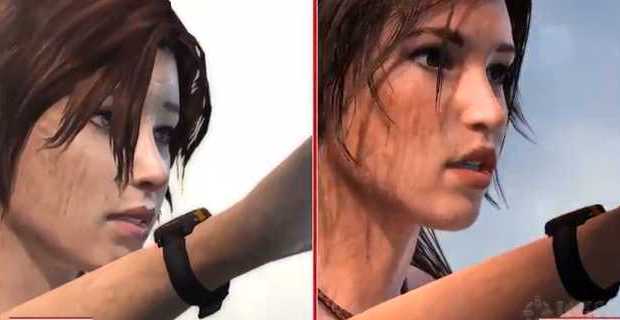 With blow-by-blow commentary from my wife

Our friends over at IGN just posted a video comparing Tomb Raider to Tomb Raider: Definitive Edition, along with an interview with with developer Scot Amos. It’s a nice interview, but it’s a lot of preaching to the choir.

I was curious about what someone who has no vested interest in being at the forefront of the technological innovation may think of the improvements in Tomb Raider: Definitive Edition –someone who can tell the difference between DVD and VHS picture quality, but who isn’t going to necessarily value something more just because it has “more graphics per inch”. So I asked my wife to give me some commentary on the differences she perceived between the two versions. See her type-written comments below.

01:31- “The hair is more piece-y, more flow-y. That’s pretty cool I guess. It’s like when they got that special paint to make Belle’s hair go just right, with just the right amount of wispiness, in the cartoon movie Beauty and the Beast.”

Me- “What? What are you talking about?”

Her- “They made a really big deal out of it in that movie.”

Her- “No, I mean, her face is more fleshy colored on the right. More living colored, but that’s not necessarily better.”

2:45– (losing interest, watching The Wrestler on TV, a scene where Mickey Rourke’s character is shopping for cheap clothes.)

Her- “Uhhhh, a little different? The colors are a little brighter.”