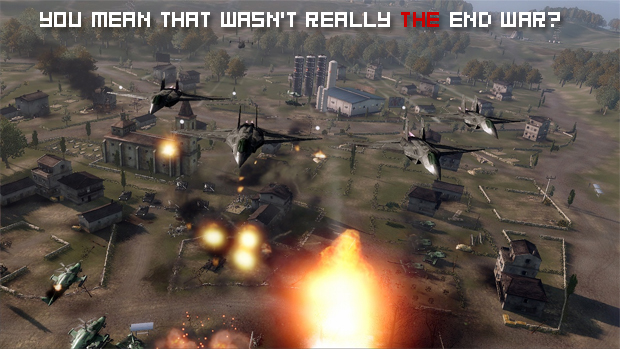 Tom Clancy’s EndWar worked well with voice commands, which I’m guessing was one of the biggest development hurdles, but the actual game itself? Pretty standard as far as real-time strategy games go. Ubisoft creative director Michael De Plater has revealed to VideoGamer that a sequel is in the works, and the same mistakes won’t be made again.

The unnamed EndWar sequel is being developed by Ubisoft Shanghai, a small team who is going to be focusing on improving “single-player story and depth.” In reference to story-driven RTS games like Company of Heroes, De Plater says that “there’s no mysteries about how we could do that and apply it in the game, it’s just something we didn’t give attention to.”

“Giving more attention to the single-player is straightforward to address and will make the game a lot of fun,” he says. The somewhat cookie-cutter gameplay is also being addressed, according to De Plater: “Changing the way the combat chain works,” … “and adding the differentiation between the three factions, again it’s not something that’s even necessarily hard to do; it’s something that we chose not to do with the accessibility.”

It sounds like the worst is over, so to say. Ubisoft has figured out the technical aspects of making a game like EndWar work properly, so now the developer will have more time to focus on everything else with the sequel, as the interview makes perfectly clear.