Tokyo Mirage Sessions #FE was easily my favourite game on the Wii U. It felt like a playful if unorthodox celebration of two beloved IPs: Shin Megami Tensei and Fire Emblem. Sporting vibrant art direction and some of the most satisfying turn-based combat that I’d had the pleasure of playing, I fondly remember powering through it pretty quickly after its initial launch.

For as much as I adored the game, I couldn’t help but wonder what the future held for it. It’s not as if it sold particularly well and, by design, it was an incredibly niche title to begin with.

During the early years of the Nintendo Switch, I would even wonder if it would ever get ported over like Hyrule Warriors or Bayonetta 2. I saw a distinct possibility that it could potentially linger and die on the Wii U, before eventually resurfacing in our collective consciousness as little more than prime material for a plethora of future “Top 10 Weirdest Crossovers” videos and listicles.

Rarely am I ever this glad to be wrong. Tokyo Mirage Sessions deserved a second chance at life, and thanks to a few small additions and adjustments, it’s mostly better than ever. 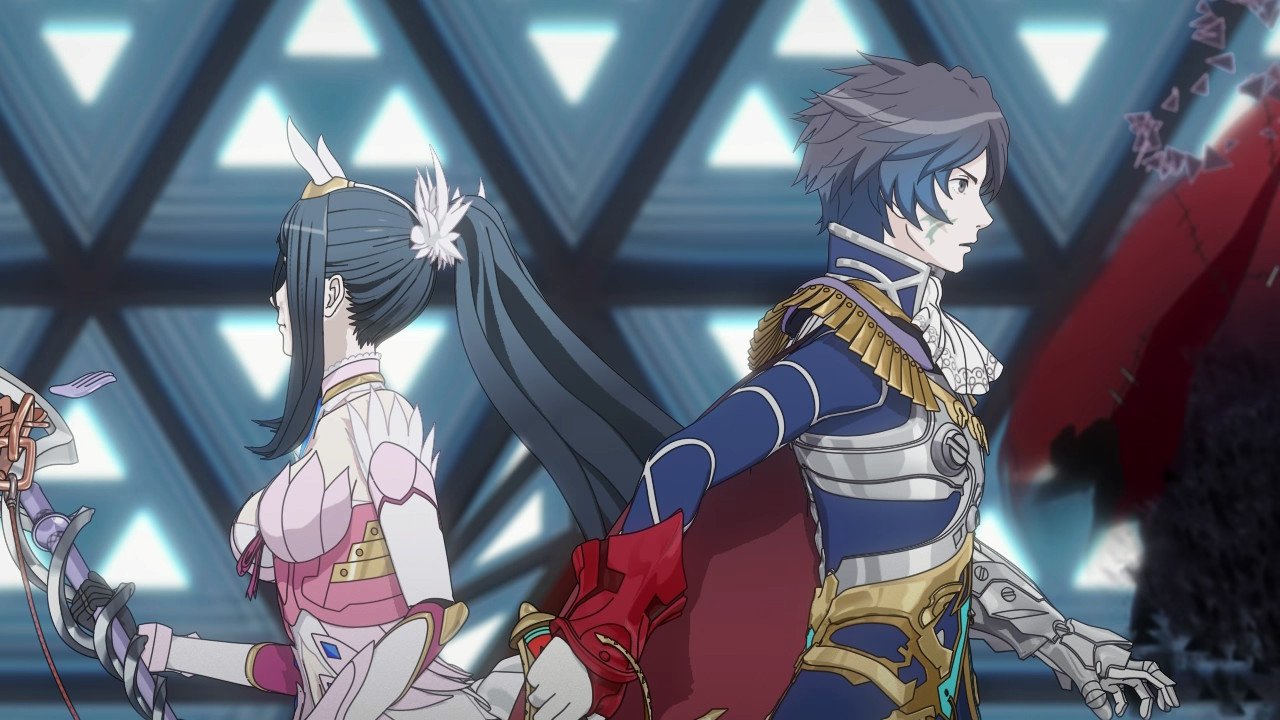 Taking place in modern-day Tokyo, as the title would suggest, Tokyo Mirage Sessions centres around a group of teenagers tasked with investigating a strange series of events surrounding mysterious dimensions called Idolaspheres and the deadly beings known as Mirages that inhabit them.

Also, the organisation these teenagers work for fronts as a talent agency that manages pop idols and television personalities.

It’s an unapologetically silly game. But for as unconventional as it is, Tokyo Mirage Sessions frequently manages to pay clear homage to both Shin Megami Tensei and Fire Emblem in interesting ways. For instance, the rock-paper-scissors-styled combat of Fire Emblem is still in play here. While the battle system itself feels like a particularly flashy spin on the type of combat found within Shin Megami Tensei or Persona, having a level of familiarity with Fire Emblem’s mechanics is going to help a lot in pinpointing an enemy’s weakness.

Alongside some mechanical cues, the world of Tokyo Mirage Sessions is littered with references to both franchises. From various nods to characters such as Jack Frost and Anna — the latter of whom works as a convenience store clerk — and numerous musical cues, it’s clear that there’s a level of appreciation for both series on display here. It just happens to be presented a self-aware and tongue-in-cheek way.

Tonally, Tokyo Mirage Sessions feels closer to the more upbeat nature of the Persona games rather than the significantly darker Shin Megami Tensei series. Even then, the former still reaches levels of despair and complexity that Tokyo Mirage Sessions never quite matches. That’s not to say that there aren’t darker or more serious moments, but the bulk of the experience is more focused on being lighthearted and energetic.

A game with a character named “TikiIsMyWaifu” (or “Tiki=Waifu”) probably isn’t demanding to be taken too seriously, after all. 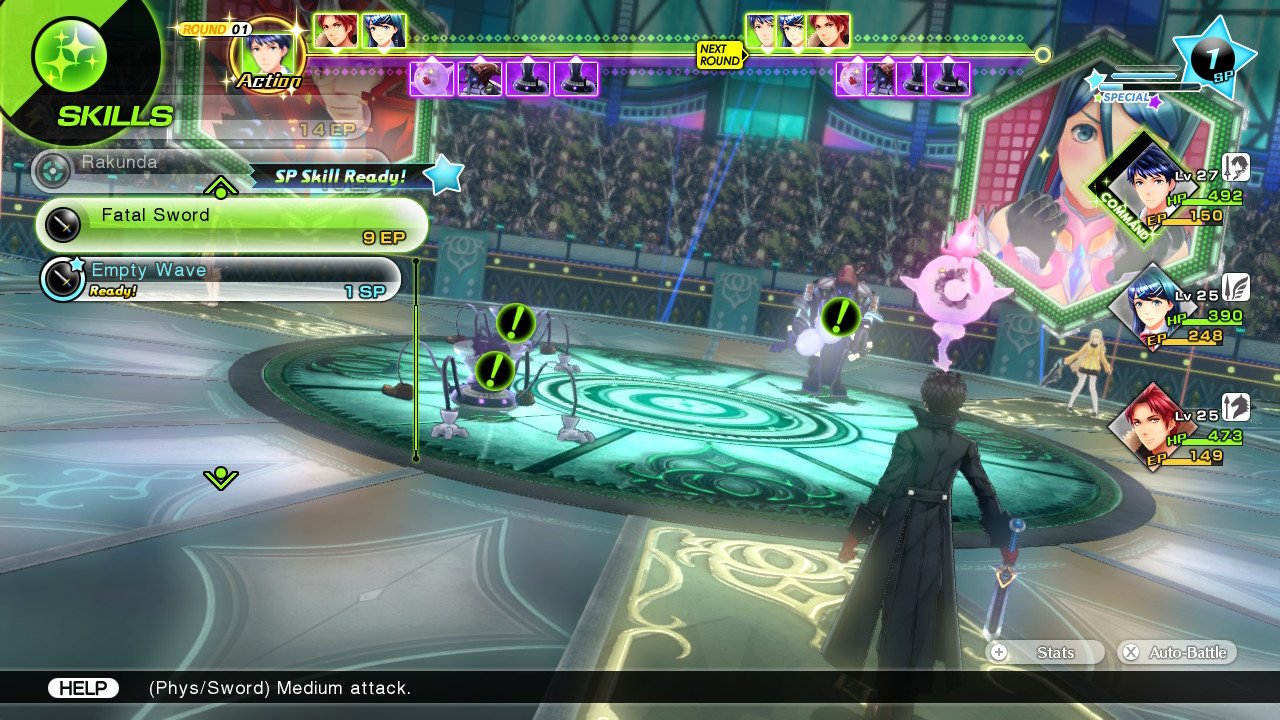 As the Encore moniker would suggest, the Switch release of Tokyo Mirage Sessions isn’t entirely a straight port of the original game. As with many other remasters, it contains every piece of DLC previously released on the Wii U — additional costumes and a handful of small dungeons intended to speed up grinding — but Atlus also added brand-new content in the form of EX Stories.

EX Stories are essentially additional side stories intended to further expand upon the characterisation of some of the game’s main party members. Each story takes place in a new dungeon called the Area of Aspiration, which houses several unique and interesting rewards. As each EX Story only took me around half an hour to complete, they’re not the most in-depth pieces of content. In fact, the Area of Aspiration itself is one of the more simplistic dungeons in-game from a design standpoint. But overall, they’re satisfying and rewarding distractions to take part in during the intermission period between chapters.

Perhaps the most significant improvement made to Tokyo Mirage Sessions, from a general gameplay standpoint, would be the option to speed up Session attacks. These are essentially chain attacks that are triggered once you exploit an enemy’s weakness, and are performed by other members of the party. In the later chapters, these combos would frequently enter into the double digits, and would ultimately wind up making combat quite a lengthy endeavour.

To a certain extent, this situation has been alleviated on the Switch. Whenever you trigger a Session, you’ll be presented with the option to enable a new ‘Quick Sessions’ feature that significantly cuts down on the animation time for each attack. While not making Session attacks instantaneous, it does severely cut down on the amount of time it takes to get through an encounter, making later-game grinding and dungeon crawling significantly breezier.

Speaking of Session attacks, Tokyo Mirage Sessions #FE Encore also adds the ability for a small handful of secondary characters to join in. While they may not be as hard-hitting as your main party members, it is nonetheless an amusing addition. As it were, there’s something oddly endearing about watching characters like Maiko, your party’s perpetually tipsy manager, help you beat up your foes. 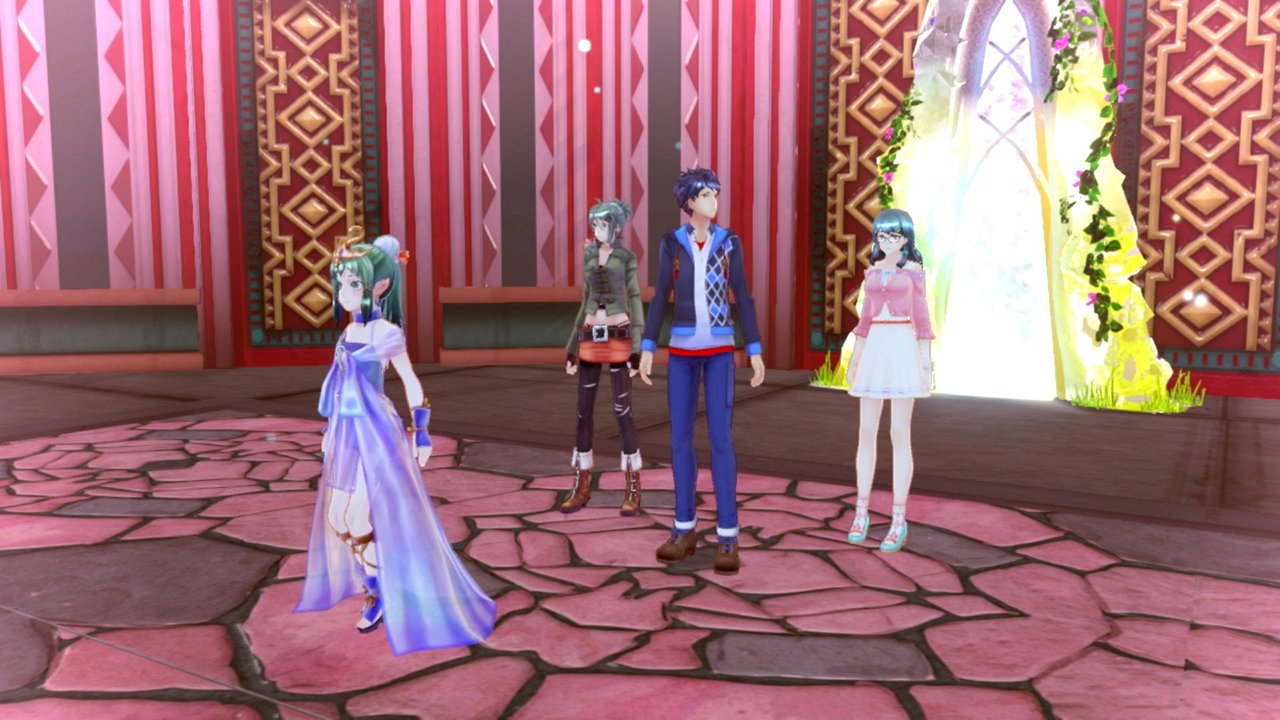 When playing Tokyo Mirage Sessions in docked mode, there appears to be very little difference between it and its Wii U counterpart from a visual standpoint. Using the highly scientific testing methodology of connecting both consoles to my TV, reaching the same screen in-game, and flipping between inputs repeatedly while attempting to spot any significant differences, I could see very little if any visual enhancements on Nintendo’s newer console. Character models and HUD elements appear somewhat blurry when playing the game on a TV, leading me to suggest this is a game best played portably.

See, in handheld mode, Tokyo Mirage Sessions is utterly gorgeous. Thanks to the console’s smaller 720p screen, character models and UI elements all appear incredibly crisp and without any significant blurring. The game’s vibrant and expressive art style gets a chance to shine in a way it never did on a larger, higher-resolution display. There are admittedly more technically impressive titles out there on the Switch, but very few games can match Tokyo Mirage Sessions in terms of sheer visual flair, and playing the game portably exemplifies that fact for me. 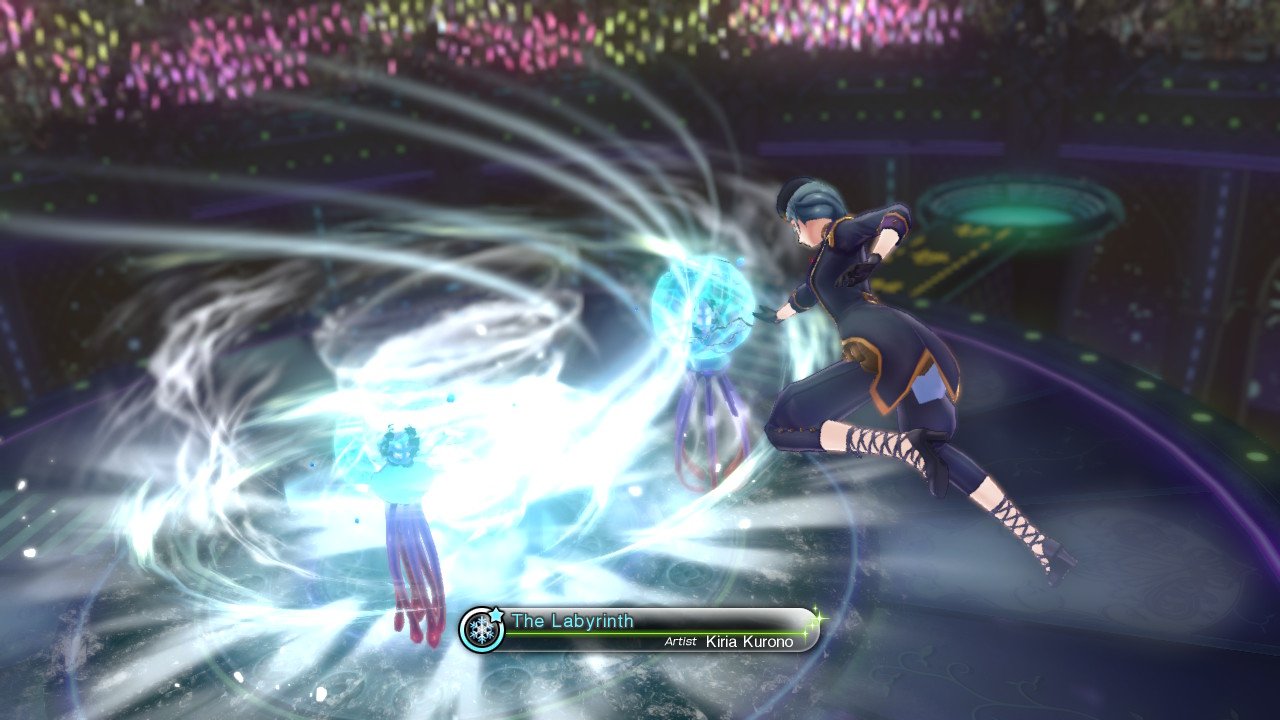 Being a game originally built for the Wii U, some concessions would have had to have been made when converting Tokyo Mirage Sessions over to the Switch. Notably, the original release used the Wii U’s GamePad for some fairly important functionality such as displaying the map screen and text messages (referred to as Topics) sent via the in-game phone system — the latter being used to provide humorous or expository dialogue to the player. On the Switch, the entire interface that was once displayed on the GamePad has been moved over to its own screen that’s accessible with a quick button press.

For the most part, this design choice works well enough. While it is a little less intuitive to navigate with a traditional controller than it ever was with the GamePad’s stylus, I stopped being too concerned about navigability after a couple of hours. Thanks to the addition of a minimap on the main game screen, you won’t have to rely on it quite as often.

Unfortunately, there are a couple of flaws with the way this system is implemented. On the Wii U, the information displayed on the GamePad used up every bit of screen real estate provided by its 6.2” panel. On the Switch, the interface takes up only a fraction of the display, with a sizeable border surrounding it.

The problem lies with the fact that it still attempts to convey the same amount of information to the player as it did on the Wii U. When you’re simply viewing map screen, it’s still just as functional as it ever was. But as I mentioned previously, the GamePad was also used to display Topics, and that’s where my only major gripe with the Switch conversion comes into play.

Due to the smaller display window, text size has also been shrunk down to accommodate for it. This makes it somewhat more difficult to read than on the Wii U. For comparison, text messages in Tokyo Mirage Sessions are now displayed in a smaller font point than the default iMessage text size on a real-world iPhone. Even as someone with reasonably okay eyesight, I still found reading Topics to be a little less comfortable than I’d like due to the font size. This situation is made even worse for Switch Lite owners, as the display on Nintendo’s dedicated handheld is only 5.5” in size, versus the original model’s 6.2” screen.

As there is no way to resize text in Tokyo Mirage Sessions, I could easily see people with poorer eyesight having genuine issues with text legibility on the Switch. Depending on your TV and living room setup, it may be possible to make Topics slightly more readable by playing the game in docked mode, but this might not be an optimal solution for some. 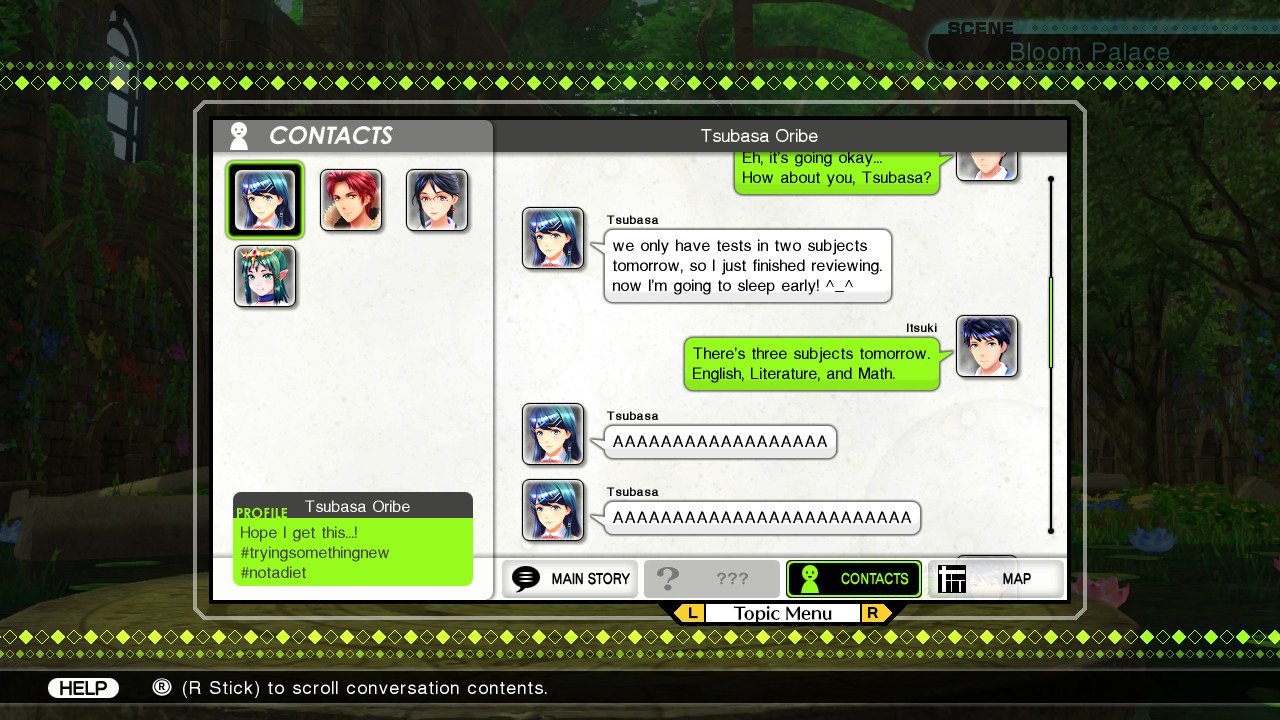 Tokyo Mirage Sessions #FE was easily my favourite game on the Wii U. With the Switch release, I could just as easily see it as a viable contender for the top spot on Nintendo’s newer machine. The combat system is just as fun and engaging as it was back in 2016, and the sheer amount of personality and style on offer gives me a sense of legitimate joy every time I boot it up.

Although it does have some issues with text readability in handheld mode, Tokyo Mirage Sessions #FE Encore otherwise represents a clear improvement over its Wii U counterpart. The ability to speed up Session combos makes the combat feel substantially faster in the game’s later stages, and the new content exclusive to the Switch release is a more than welcome addition to an already sizeable package. Despite my one issue with it, I can’t help but consider it the superior version of an already excellent game.