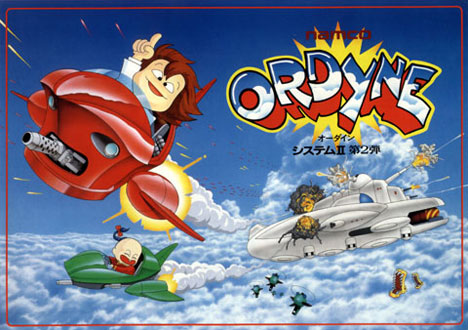 The stand-out title in this group for most of you would have to be Final Fight. That’s not saying too much though, since you’ve probably never heard of the other two games before. Let me also take this opportunity to remind you to show your support for presidential nominee Mike Haggar. We can’t win the good fight without you!

As a kid, I was never really into the shoot ’em up scene outside of Galaga. That was until one sunny afternoon when I discovered the awesomeness that is Ordyne.

For whatever reason, I just loved the concept of collecting crystals (some form of futuristic currency?) to upgrade my ship and buy better weapons. There was nothing I wanted more than to kill that evil bastard Kubota for stealing my character’s fiancee … my childhood was troubling to say the least.

That’s enough rambling for one day. Will anyone be making any Virtual Console purchases?

A crime spree on the Virtual Console(TM) this week has resulted in a trio of kidnappings, threatening to ruin the weekend of three classic video game stars Mike Haggar, Dr. Tomari and Mighty Bomb Jack!  Do you have what it takes to bring their enemies to justice on three generations of consoles; NES, Super NES and TurboGrafx16?  For the best retro gaming around, it’s time to pay a visit to the red-hot Wii(TM) video game system’s Wii Shop Channel.

Mighty Bomb Jack(TM) (NES(R), 1 player, 500 Wii Points):  Mighty Bomb Jack is an action/adventure game that was originally released for the Nintendo Entertainment System in 1987 by Tecmo. The hero of the game, Jack, must make his way through 16 levels of a pyramid in order to defeat the demon Belzebut
and rescue the royal Pamera family.  Each level is split into two parts; an action zone and a Royal Palace room.  Action zones can be split up into several portions, and contain power-ups usually hidden in treasure chests such as money bags, Mighty Coins, and Mighty Drinks.  Mighty Coins allow Jack to change colors; blue allows Jack to open orange treasure chests, orange allows
him to open any treasure chest by simply touching it from the side, and green transforms all enemies on the screen into coins for 5 seconds.  Mighty Drinks add 10 seconds to the game’s timer.

Final Fight (Super NES(R), 1 player, 800 Wii Points):  Jessica had it all. She was the daughter of former wrestling star and mayor of Metro City Mike Haggar and girlfriend to Cody Travers, one of the coolest and toughest boys around.  But now she has been mysteriously kidnapped!  Take to the streets with either Haggar or Cody and fight your way across town, deep into the turf of the Mad Gear Gang.  As you cross the town, fight with all your strength to
save the one you love.  Enjoy unmatched beat ’em up action in this arcade classic and discover just who is behind the Mad Gear Gang in what may be Metro City’s final fight.

Ordyne(TM) (TurboGrafx16, 2 players, 600 Wii Points):  Ordyne is a port of the popular side-scrolling arcade shooter that includes simultaneous two-player co-op play as well as impressive visuals and catchy background music.  The evil Kubota has kidnapped Dr. Tomari’s fiancee, Kana, and taken the colossal nuclear reactor Ordyne.  In order to reclaim them, Dr. Tomari and his assistant Felix take to their battleships and head off in pursuit. Avoid
enemies and advance through seven different levels that take place on land, sea, and air.  Collect crystals from defeated enemies and use them to buy items or upgrades for your ship at the Space Inn.  Do you have what it takes to defeat the boss at the end of each level and ultimately reach Kubota in the final stage, Kubota World?