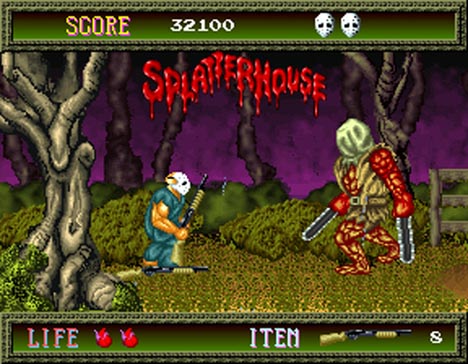 It’s Monday, and that means it’s time to look into the three ghastly faces of disappointment: Going back to work, coming home from the greatest weekend EVAR, and this week’s list of Virtual Console releases.

Today you’ll be able to download Excitebike (NES, 500 points); Beyond Oasis (Genesis, 800 points); and Splatterhouse (TurboGrafx16, 600 points) to help get you ready for the rest of your week. By the way, Splatterhouse is something akin to a horror game, and not what you might think it is. Also disappointing.

Full press release after the jump!

Excitebike(tm) (NES(r), 1 player, 500 Wii Points): Face crazy curves,
hairpin turns, and daredevil jumps as you race toward the checkered flag
and the Excitebike championship. Race against the clock or challenge an
opponent. You must keep your bearings as you fly through the air and
avoid getting clipped by other racers. Stay cool under pressure or your
bike will overheat. If you get tired of racing on the circuit, create
your own course in Design Mode. There you have access to all the ramps,
mounds, bridges, and other obstacles Excitebike has to offer.

Beyond Oasis(tm) (Sega Genesis, 1 player, 800 Wii Points): You are
Prince Ali, who has discovered a buried gold armlet. This armlet once
belonged to a wizard who waged a long war against the evil wielder of a
silver armlet. The silver armlet was used to create chaos and
destruction, while the gold armlet had the power to summon four spirits:
the water spirit “Dytto,” the fire spirit “Efreet,” the shadow spirit
“Shade,” and the plant spirit “Bow.” To stop the person who first
discovered the ancient silver armlet and is again using it for evil,
Prince Ali travels the land of Oasis, gradually acquiring the ability to
summon the four spirits. Use your wits and speed to claim the silver
armlet!

SPLATTERHOUSE(tm) (TurboGrafx16, 1 player, 600 Wii Points): Rick and
Jennifer, both parapsychology students at the local university, are
visiting West Mansion, site of the research lab where the famed Dr. West
conducted some of his most gruesome experiments. A sudden storm forces
them to find shelter inside the mansion. Once inside, they are attacked
by monsters. Jennifer is kidnapped and Rick is knocked unconscious.
Hours later, Rick awakes to find himself covered in blood, with the
Terror Mask stuck to his face. His only hope is to depend on the ancient
powers of the mask to give him the strength and courage to find
Jennifer. Now Rick’s fight has begun! Splatter your way through 7 stages
of side-scrolling horror!