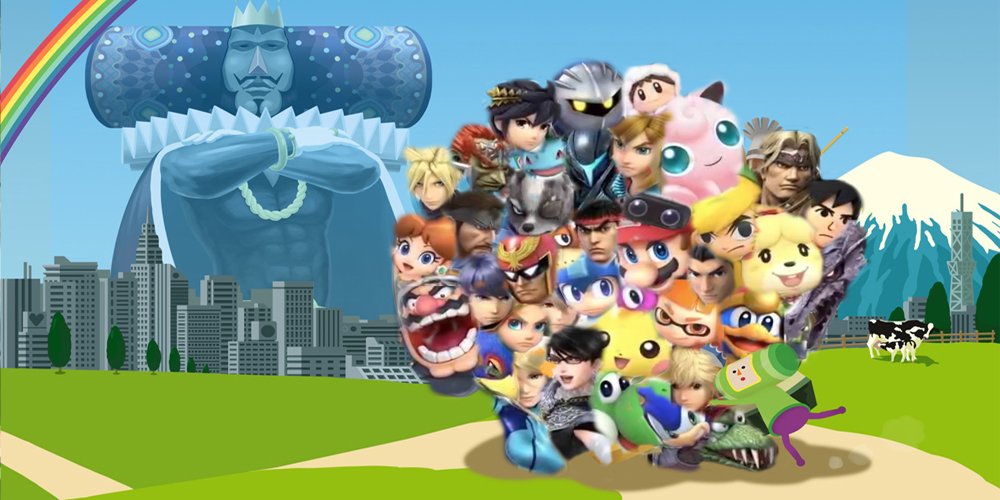 But I love Katamari Damacy for all those reasons and more, and that’s why I’ll be playing it first today.

Katamari Damacy is a wholly whimsical romp with few rivals in its field. Structurally, it’s a racing game where you create your own course. But instead of trying to get to the finish line first, you’re working to grow as large as possible by lobbing objects onto your ball-machine. Nothing too much larger than you will stick though. You’ll need to develop your instincts before you know for sure exactly how big you need to be before you can roll over a sumo wrestler and make him your own. At the start, you’ll be struggling to bump a mouse on your mound. By the end, you’ll be running over skyscrapers and storm clouds without a problem.

It’s non-stop, slapstick absurdity that upends expectations in ways that few others ever have. Smash is the king of physical comedy in the domain of fighting games, but in the grand scheme, Katamari beats it out in that arena.

It’s got the whole world in its hands

The Katamari games use the same low-poly aesthetic that was later popularized by Minecraft to craft a world where everything appears to belong together. It is extremely impressive that Smash has managed to make Duck Hunt, Snake, and Cloud all look right next to each other in a drag-out brawl, but Katamari combines bullfrogs, school girls, Kaiju, corn cobs, bear-men, woolly mammoths, tornados, and Thunder Gods together in a cohesive way that never challenges your suspension of disbelief.

Katamari Reroll‘s recreation of Earth feels completely cohesive, despite the fact that it contains an entire planet’s worth of stuff. It feels like a real place, and I want to live there.

A soundtrack that swings from a star

Smash Ultimate has one of the largest, most consistently well-crafted soundtracks in the history of video games, but Katamari Reroll has one of the best soundtracks in the history of anything. Comparing the two is largely a quantity vs. quality conundrum until you factor in originality. I love hundreds of the tracks on the Ultimate soundtrack, but I can find nearly all of them elsewhere. While it’s extremely convenient to have access to them all in one place, I’ll still have to sort through hundreds of other tracks that I’m more lukewarm towards before I get to the gems.

With Katamari Reroll, all but maybe one or two of the songs are anything but all-time classics. When it comes to originality and one-of-a-kind charm, it doesn’t get much better than  Katamari on the Rocks, You Are Smart, The Wonderful Stars, Que Sera Sera, Lonely Rolling Star, A Crimson Rose And Gin Tonic, Wanda Wanda, and, oh my dear God, Cherry Tree Times.

Cherry Tree Times makes me cry literally every time I hear it. No other song in the world can do that to me. I’m literally crying as I type this right now because I let myself listen to the first 45 seconds of Cherry Tree Times. The intense innocence, earnest kindness, and sincere power of good woven into each note of this beast are just too strong.

Laugh all you want, but show me one other song that can make a 41-year-old game blogger cry in 45 seconds or less, and maybe I’ll change my mind. Until then, Katamari gets my vote for the most affecting score of all time.

A violent world where everything will be alright

Conflict is everywhere today, in part because it’s never been more profitable. Social media, TV news, political science, and reality TV have blurred into one giant mass of top-rated, 24-hour drama, fueled by painting “the other team” as villains and “our team” as heroes and/or victims. Post something on Twitter that catches the ire of a big name provocateur and they may prop you up like a pinata for their followers to beat with a stick for days on end. And that’s just talking about the relatively “safe” emotional warfare that fills the lives of the perpetually online. If I were to touch the tip of the iceberg of violence and death you can find on TV, online, in movies, and of course, real life, I’d need a lot more space than this short paragraph in a Katamari-praise blog could provide.

So how do you cope with all the intense pain that people are inflicting on each other en mass on a daily basis? One way is to play with it in a safe way. Smash Bros. certainly allows for plenty of that. Need to blow off some steam from a stressful day of dodging emotional bullets? Why not pretend to be a giant wrestling Pokemon cat and body slam Simon Belmont into the stratosphere? You could definitely find worse ways to let off some steam after a long day in the trenches of life in 2018.

But is there any better way to make light of the ridiculousness of modern-day power plays, while acquiring a supreme sense of control over your surroundings, than to roll a marble sized ball around the town until it grows to the size of a football field, conquering anything that dares stand in its way, while never actually doing any actual harm to anyone?

As Obi-Wan Kenobi once said to a crabby four-armed droid who coughs a lot – “Oh, I don’t think so.”

The last of a dying breed

Smash appears to be the last of a dying breed of AAA-crossover-local-multiplayer-4-player fighters. There were a bunch of them at one time or another. Viewtiful Joe: Red Hot Rumble, DreamMix TV World Fighters, and PlayStation All-Stars Battle Royale immediately come to mind. Ironically enough, it’s the Battle Royale genre that seems to be taken dominance over the genre. If you want to play King of the Hill with your friends, old-fashioned fisticuffs appear to be on the way out while the likes Fortnite are one the way in. That’s why I’m guessing that Ultimate may be the last traditional Smash game we see for a little while. It’s hard to imagine what else they could add to the formula beyond more fighters, and at a whopping +74 playable characters at present, it’s arguable that any more would go beyond gluttony and into full-on bloat.

Still, it’s hard to imagine that Nintendo would ever stop making traditional Smash games for good. The series is beloved by millions, and the central gameplay mechanics are just too perfect to let go of. Katamari, on the other hand, is part of a movement of low-detail, high-personality Japanese retail games that appear to be on their last legs these days. There was a time when the like of Chibi-Robo, Chulip, Jumping Flash, One Piece Mansion, Under The Skin, Ribbit Golf, and Cubivore were regular sites at high-class brick and mortar establishments like Babbages and Electronics Boutique. These days, games that ilk are usually relegated to indie developers and online storefronts. Even Katamari Reroll is being released in extremely limited physical quantities, despite being the progenitor of a series that birthed a book, a fashion line, and no less than five full sequels.

That’s why I encourage you to pick up the game at retail if you can. This it the first time a Katamari game has been released outside of Japan on a Nintendo console, and if it doesn’t to well, then it will also surely be the last. If that’s OK with you, then sure, save your money. Just don’t come crying to me when Namco goes the way of Konami and the only new Katamari titles past 2019 are pachinko machines.