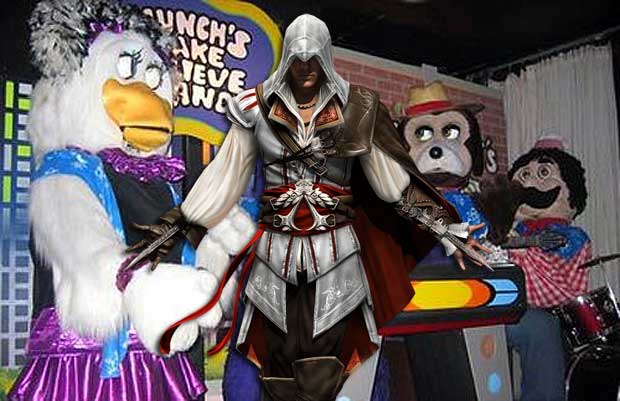 Moments ago, Ubisoft sent us word that it has just revealed Assassin’s Creed 2 for a holiday 2009 release. Yeah, we’re as surprised as you are.

The press release (found after the jump) recounts a lot of the info we already knew (takes place in Italy, play as someone named Ezio, etc). But hey, this quote is new!

“Our creative team is working hard to top the experience of Assassin’s Creed,” said Ubisoft’s creative director Patrice Desilets. “We’ve made improvements to every aspect of the game. We’ve plunged ourselves into the stunning history of the Italian Renaissance so that we can offer fans a unique, varied and innovative Assassin’s Creed experience.”

Get in? “Plunged”? Like an assassin’s blade, or the way you “plunge” into things as you dive off of high points in the first game? Get it!?

The latest issue of Game Informer has the screens and details on the game, and is actually worth picking up and reading. As opposed to just getting the details here, which is like looking at a picture of a Big Mac instead of eating one. Definitely lunch time…

SAN FRANCISCO – April 16, 2009 – Today Ubisoft announced that Ubisoft Montreal is developing Assassin’s Creed II on all current-generation platforms for a scheduled Holiday 2009 release.  The initial installment of Assassin’s Creed® was released in November 2007 to popular and critical success, selling 8 million copies worldwide and garnering awards such as Best Action Game 2007 from 1UP and Outstanding Achievement in Animation from the AIAS.

Assassin’s Creed II is the product of over two years of intensive development by the original creative team behind the Assassin’s Creed brand. In a vast open world environment, the game invites players to incarnate Ezio, a privileged young noble in Renaissance Italy who’s been betrayed by the rival ruling families of Italy. Ezio’s subsequent quest for vengeance plunges players into a captivating and epic story that offers more variety in missions, surprising and engaging new gameplay elements, diverse weapons and a profound character progression that will appeal to fans of the original Assassin’s Creed as well as entice players new to the brand.

“Our creative team is working hard to top the experience of Assassin’s Creed,” said Patrice Desilets, creative director at Ubisoft. “We’ve made improvements to every aspect of the game. We’ve plunged ourselves into the stunning history of the Italian Renaissance so that we can offer fans a unique, varied and innovative Assassin’s Creed experience.”

Additional details on Assassin’s Creed II are revealed in the May issue of Game Informer.