The Titanfall franchise has had a bit of a rough go of it, innit? The first game was hyped into the stratosphere and came crashing down to Earth not long after launch when players seemed to just get bored of it all. Titanfall 2, inarguably a superior game from what everyone has told me, had the misfortune of launching near Gears of War 4 and Call of Duty: Infinite Warfare while also having to compete with Overwatch for the attention of online multiplayer gamers. It was still successful, we’ve been told, and the franchise will continue sometime in the future. But for now, players looking for their next hit of the series will have to turn to mobile.

I’ve written about my love of Clash Royale before, arguing it’s probably the best free-to-play game on mobile. I’ve even said I’d rather more developers rip off that formula than some of the others the permeate the various app stores, i.e. clicker games. So I seem to have got my wish here with Titanfall Assault. It wears its inspirations on its sleeves, proudly aping the worldwide phenomenon while mixing in a few original ingredients.

Matches in Titanfall Assault can last up to four minutes long, though I have yet to get one near that mark. Before a match, players can edit their decks, swapping out cards for ones that work better with the rest of their arsenal. Decks are divided into three categories: Titans, Support, and Pilots. Decks can have three Pilots, three Titans, and four Support cards, however, those are available to players at random. Like Clash Royale, each card has a cost associated with it that subtracts from your energy meter. The meter slowly fills up during the match, getting a big boost at the two-minute mark.

One minute into each match is when Titans become available. Titans are extremely powerful and the right combination can be nigh unstoppable. They can easily destroy the enemy base securing victory, however that is not the way you’ll win most matches if my experience is as universal as I think it is. The map, and so far I’ve only played the first map of the game, is made up of roads and buildings. Titans cannot go over buildings but pilots can. This is important because Pilots, as well as human Support cards, are the only way to secure a checkpoint.

There are three checkpoints on the map, one near each base and one in the middle. Score 100 points by holding the checkpoints the longest and you win.In fact, in my 40 or so matches, it’s been the only way I’ve won or lost. And I’ve lost a lot.

Winning a match gains XP. The higher your XP, the greater level you can raise each card. You also get a loot box that, naturally, has a timer on it. There are different levels of loot boxes containing a diverse amount of cards. If you collect multiples of the same card, you can use them to level that card up. What is much appreciated here is any cards I have over the required amount when I level up will apply to the next level. So if I have eight cards and I only need four to level up, the extra four will be applied to the next level for that card. 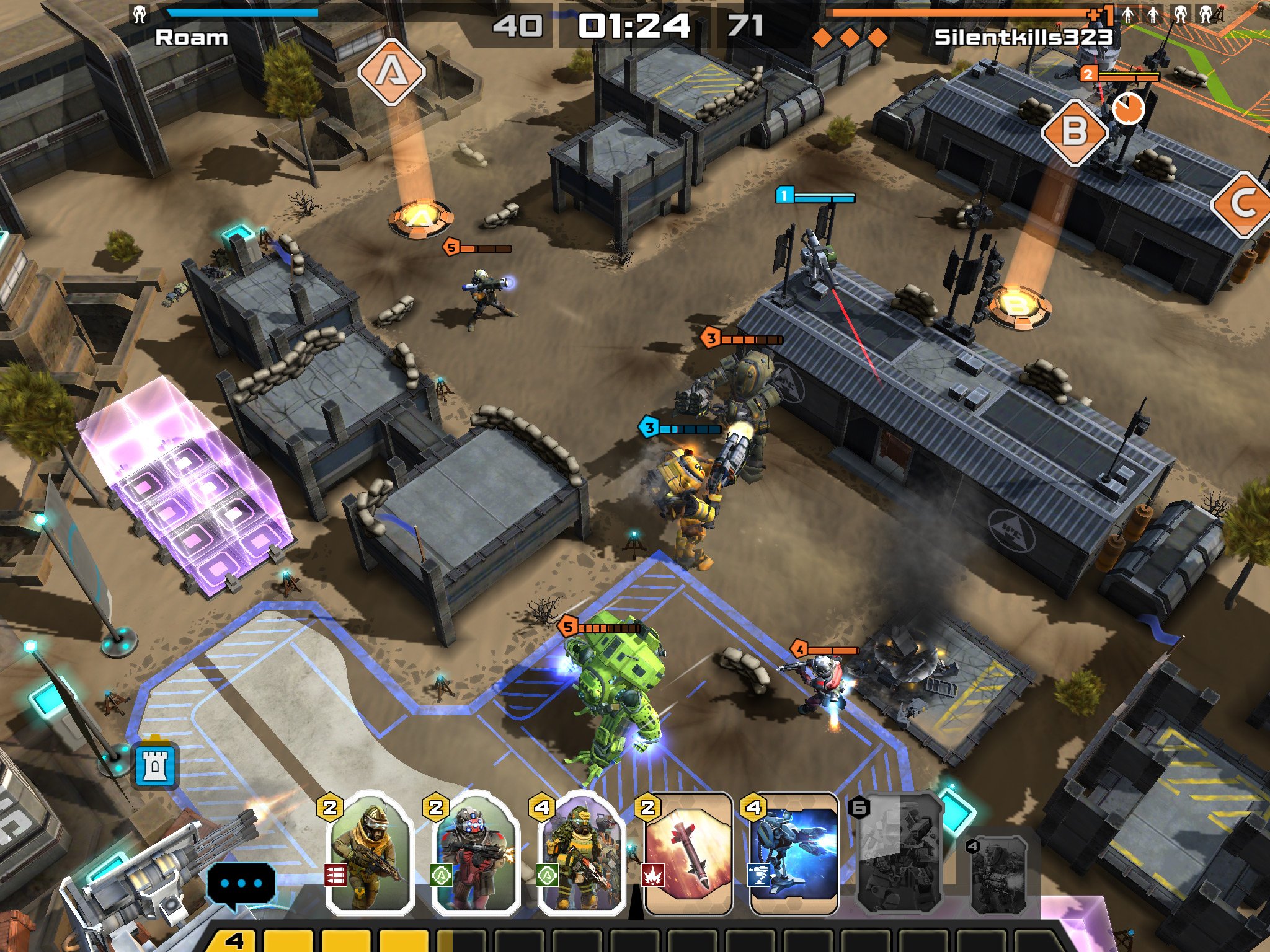 I’m still very much in the shallow end of what I hope is a deep pool of strategy. I cannot say for sure if people can buy their way to victory as skill always plays a factor in these types of games. What I can say is I’ve come across Pilots and Titans far more powerful than what I have access to and both forms of currency — tokens and coins — are available for purchase as well as loot boxes promising powerful Titans. The prime strategy of just overwhelming your opponent seems to be the only way to victory and in my experience, the type of epic comebacks I’ve experienced in that other game have yet to rear their head here. But it’s still early, and I’m still trying to figure out my very best strategy. Titanfall Assault is certainly a beautiful game and on my iPad it plays like a dream. That is when it wants to work properly.

There have been a few issues in these first few days, the biggest of which being the game glitched out on me during the tutorial forcing me to delete and re-download the game. Word of advice, make sure you are working with a powerful wifi router. I’ve also failed multiple times to connect to the server and have had to sit and wait for five to six minutes to get an opponent. I realize it’s still early in this game’s existence so that may be an issue until it becomes more popular, but I bring it up because I can’t be the only one experiencing this.

These issues aside, first impressions for Titanfall Assault been pretty darn good. I’m not sure if it is yet ready to dethrone the RTS champion, but I know it’s certainly better than many mobile games I’ve played this year.