The beauty of simplicity

Confession time: I’m pretty out of the loop when it comes to the indie game scene. I love me some Nidhogg, Samurai Gunn, and Crawl, but it’s not uncommon for me to have only heard about these games just before release or later. With that track record, you won’t be surprised to hear that I knew nothing about Titan Souls before sitting down with it at PAX.

I am so glad that I did, though. Between the music, art, and the brilliantly challenging combat, Titan Souls is far and away one of my most anticipated releases. 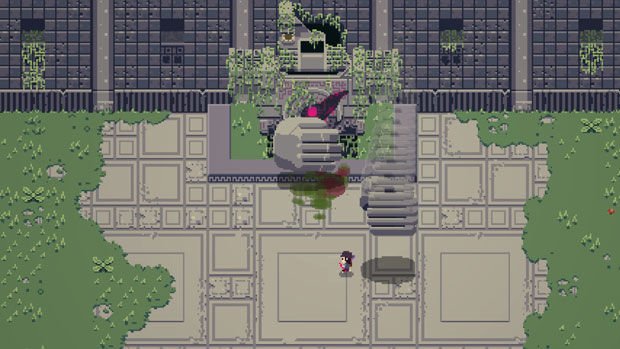 There are no real enemies or objectives outside of taking down the bosses that inhabit the world. After a short introduction to the controls, I was immediately thrust into an overworld pitting me against four bosses, taking on each at my own leisure.

The bosses themselves are incredibly simple to understand, and monumentally challenging to beat. Each requires just one hit to their weak spot to kill. Getting that spot exposed is another matter — every boss comes with its own system of defenses.

One boss, a massive ice cube, immediately hones in on you, and proceeds to slide around the temple until your guts paint its hallowed halls. To get to the fleshy one-hit center, I needed to lure the cube over to one of four pressure switches, each activating a torch that would melt the ice once I managed to get my arrow to catch its fire.

Lets talk about that last part. In Titan Souls, you only have one arrow to shoot, and it is your only means of attack. As you can imagine, this makes timing and managing you shot very important, but the game takes it bit further by making a mechanic out of your limited ammo.

Say you miss your initial shot; you can summon your arrow back, hitting anything it touches on its the way back to you. This skill was especially useful during one of the early bosses, a giant gelatinous blob that required multiple hits to whittle down to the fleshy one-hit-kill heart. 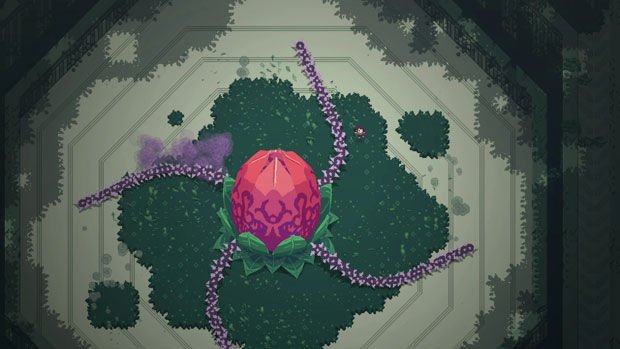 For all of the challenge that the game offers, it’s worth mentioning that I was never frustrated with the game. Maybe that speaks to how well it communicates its objective. By my first or second death, I understood exactly what it was that I was doing wrong, or needed to do better. Everything else was a matter of execution.

Whenever you die in Titan Souls, you will know that it is only because you are not good enough, and that’s fine. With the gameplay feeling so tight and responsive, and every boss being one or two hits away from defeat, I found myself willing to try things over and experiment with new tactics until I’d finally taken down a boss.

Honorable mention goes to the music as well. Whenever I found myself slipping into frustration, its soft, mellow tunes would snap me back to sanity.

When I got up to finish with Titan Souls, I noticed one gentleman working the booth was keeping tally of all my deaths and kills. After seeing my 30+ deaths to take down four bosses, I asked the man at what point in the game this demo took place in. He turned to me, smiled, and said this was just the tutorial. I am really damn excited to see what the rest of Titan Souls has in store.