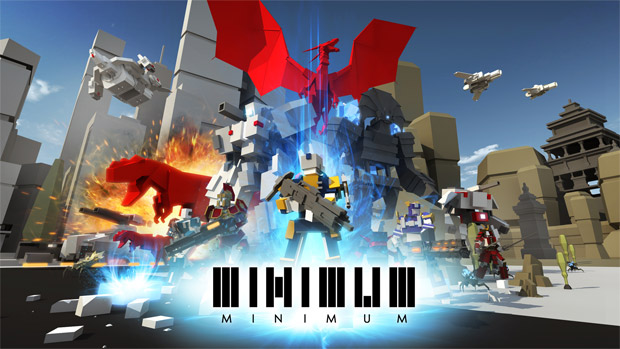 What’s this? A free-to-play shooter that looks halfway decent?

In the wake of Aliens: Colonial Marines, the TimeGate Studios name may not inspire confidence; despite this, the trailer for the company’s upcoming free-to-play third-person shooter Minimum has me curious. It’ll be arriving on Steam in an alpha capacity on April 16, but for now, we have an FAQ to glean information from. In short, the game sounds risky in a potentially great way.

Ranging from exploding ice snipers to flaming katanas, weapons will make use of an upgrade system not unlike Contra‘s tried-and-tested mechanic. Energy from slain opponents will feed into five levels of power that are reset upon your own miserable death. Then there are titans, shown throughout the video, that fight one another while being fueled by energy obtained from creatures in the game environment. I also see dinosaurs in all their blocky glory. Huh? Okay, sure.

Some of these ideas almost seem to be in competition with one another, though this is an early version we’re seeing and it sounds as if the team will be open to feedback on the direction it ultimately takes for Minimum. Could be cool. Either way, it’s more compelling than most everything else in the F2P shooter genre right now.