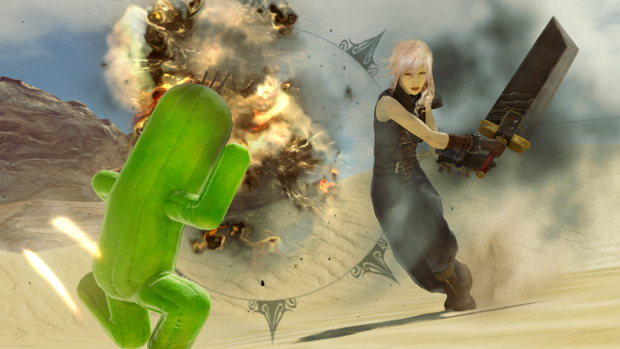 I’m really rather stoked for Lightning Returns: Final Fantasy XIII in spite of myself. And it’s not the flagrant appeal to nostalgia with the Cloud Strife outfit and buster sword DLC, promise. Actually, Lightning’s new default costume marks some of the better character design in the Final Fantasy XIII sub-series, ostentatious as it is. Still, there’s going to be some conflict within me over whether to rock it, the SOLDIER uniform, or some other duds, like the Final Fantasy XIV: A Realm Reborn Miqo’te outfit from this trailer.

Now I’m remembering how much time I spent in Resonance of Fate at the clothing shop. Or all of Persona 3 and Persona 4‘s cool outfits (like the main character’s Dojima garb in P4!). Our own Joseph Leray can explain to you why Final Fantasy X-2 is good.

Clothing aside, this was a damn good trailer. Relatively subdued, as far as Final Fantasy trailers go. Easy on the bombast. You’ve the pitter patter of scared footsteps from guards. When a big monster does show up, the background music dies down so you can appreciate its heft and menace. The music is also strangely akin to Western dramas and thrillers before the last third’s montage kicks up. Plus there were Max Payne 3/Papo & Yo favelas. Good show.

Beyond that, the PlayStation Blog has some gameplay details. Some foes can be disabled piecemeal and your loot drop can change depending on which sections you destroy, and there is also a manual counter attack mechanic. The counter, only effective against physical attacks, uses up a chunk of the ATB, which is cool. Using it badly could be disastrous, but using it successfully could be a game changer. I’m down with more chances for engagement. Nailing R1 to critical hit in Final Fantasy VIII was fun. What do you guys think?