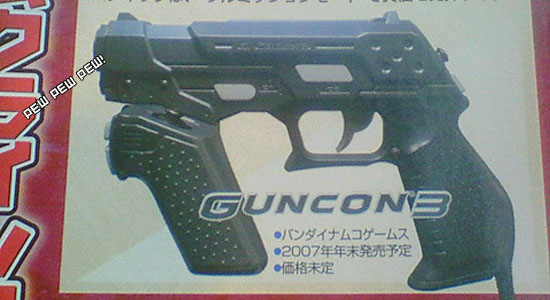 Is there anyone here who finds that light gun rail shooter games can hold their attention for more than a half an hour? This one’s for you. The latest issue of Famitsu has confirmed that Time Crisis 4 will be indeed coming to the PlayStation 3.

The game will offer at least two modes, continuing in the Time Crisis tradition of offering hours of varied and action-packed gameplay. “AC” mode appears to be a direct port of the title that was released in the arcades last year and “Mission Mode,” in which players take control of William Rush, a captain in the U.S. Joint Intelligence Division. Rush also happens to be one of the least memorable characters in any videogame ever, right next to Crissy, the fast running, high jumping camp counselor from the NES game, Friday the 13th.

The game will ship alongside the Guncon 3, a peripheral which will give the PlayStation 3’s dust-gathering feature a run for its money. The gun appears to feature an analog stick for all of that analog-ing you’re going to be doing while shooting generic looking foot soldiers.