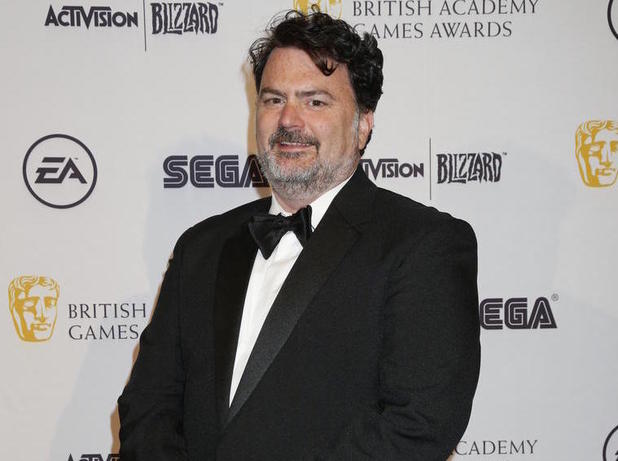 Last night Destructoid attended the videogame BAFTAs in order to do some hard-hitting journalism. Speaking to Tim Schafer, who was in attendance to hand Shadow of Mordor the BAFTA for Best Design, we spent ten minutes discussing everything from the harm Kickstarter is doing to developers’ careers to how little attention he pays to butts when crafting a character.

We kicked off the interview by trying to be vaguely interested in the award he had just handed out to Shadow of Mordor and asked him what his opinion was on procedurally-created narrative in videogames as a developer who crafts experiences with much more scripted stories.

I think there have always been these two types of stories in games, the stories where somebody crafted an authored experience for you and then there’s the stories where I jumped out of my car in GTA just as the cop fired on the bridge and you just kind of make up your own stories and they’re both totally different.

I think that type of story is really important to the player because you created it, but there’s always going to a place for the other kind because you know somebody spent years crafting this perfect game for you. I think both are really important and I’m glad we have both of them.

With that out of the way, we got Tim to chat a little about his career over the years. First up on the chopping block was a question we had been dying to ask Schafer for a while. Just how did he expect people to get through his obtuse adventure game logic back in the day?

I have no idea; people were smarter back then. Playing the games I sometimes wonder that myself. I think, “This puzzle’s really hard, how are people supposed to get that?” Part of the reason is that back in the day […] the thinking was “people are not going to finish this game.” Sometimes we thought that.

That’s why we did the easy mode in Monkey Island 2, but the answer is for most of these puzzle the hints are there if you keep talking to people, if you keep digging down. Most of them are hinted at if you keep exploring all the dialog.

So we made the first half of Broken Age and the first half is always easier than the second half of a game. We were like “this is too easy.” We made Grim Fandango and that’s too hard. Adventure game fans are hard to please.

Next up on our list of questions was one that readers have been trying to get an answer to for a while. Which of Tim’s series means the most to him, and which would he most like to revisit?

That’s a tough question because of course every game is important at the time. There’s things people don’t expect when they ask me this like Kinect Party — did you ever play Kinect Party? It was our lowest-selling game of all time. It’s a Kinect game where little kids play with their grandparents together and it was really rewarding to see families playing that, it was just so rewarding, you know?

The world of Psychonauts is so interesting because you can just keep creating more brains every time you meet somebody and wonder what the world inside their brain looks like. It also feels like the kind of unfinished story of Eddie Briggs [Brutal Legend] would be a great excuse to work with Jack [Black] again.

It’s hard because of how Grim ended. It was a really rich and full world but I feel like that character had such a complete progression that I feel like he’s done with. I don’t know if I want to go back down that road with someone who isn’t Manny.

All the other ones, a lot of them at least like Psychonauts you can just imagine. For Brutal Legend it’s kind of already designed because we had to throw away half that game to get it done two years late. It’s a lot easier to imagine going forward with that or Psychonauts.

A recent hot topic brought sharply into focus by Peter Molyneux’s Godus was the effect crowdfunding campaigns can have on audience’s faith in developers. From pitching your game to fans for financial investment before development has begun to the pitfalls along the way, with Schafer himself previously facing the firing line from disgruntled Kickstarter backers, we wanted to know if he plans to continue crowdfunding his future projects and what effect he thinks Kickstarter failures have on the reputations of developers.

There were so many great things to Kickstarter when it first exploded and we had that rush of not just money but also goodwill too. That love and support from the community told us that people want to play adventure games still and that was really important to us.

Because everything’s announced at the start of creating your game and not the end like we normally do, it makes more sense to be transparent like we were. That made us vulnerable to a lot of criticism because people could see “oh, the schedule’s changing” or “You’re doing this thing the way I don’t want you to do it.” The experiment’s not over yet and I’d still call it an experiment, but being that exposed and vulnerable was difficult. There were some good things and toward the end there have been some bad things.

My hope was that by being really transparent and showing all the ups and downs of game development, that people who play games would start to understand more of what goes on when making a game. But still, after all this time, it still seems like people get super mad about things that are totally normal. Things like schedules slipping happen on almost every project but people just don’t hear about it because we don’t usually show people.

I think developers have to learn like publishers had to learn before the warning signs when a game is in trouble and what is just going through the normal ups and downs of development.

The question I personally wanted an answer to the most: when is Broken Age: Act 2 coming?

Well we’re in beta now and we’re going to come out this spring. There’s not much time left in spring. When’s the last day of spring? It’s coming out this spring which is very soon.

At this point we pushed him on how soon was very soon? We confirmed basically that it’s more than three days away still.

Well, not this week. I’ve been playing the Vita version on the plane over here. It’s finished, we just want to catch all the bugs.

Finally, with all our serious questions out the way, we ended the interview on a slightly lighter note. Yes, you guessed it, we asked him about his favorite butts in videogames. We mainly learned that Tim Schafer rarely thinks about butts when designing a character.

Favorite butt in videogames? Are there a lot of butts in videogames? I guess everyone has a butt but you don’t often get to see them. I guess in third-person games you’re running behind them.

I’m now trying to do the interesting task of trying to visualize butts from videogames, they don’t usually get a starring role. I’m now seriously worrying I’ve not been paying enough attention to butts in the games that I’ve made. Have we ever shown any butts in my games? Yep, you’ve stumped me with butts.

Manny’s butt in Grim Fandango is boney; it’s basically just a pelvis in a suit.

In Costume Quest actually there was a cat that had a very prominent butt featured, so I guess that butt.