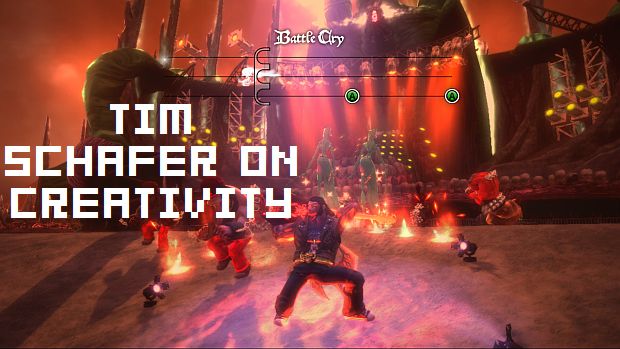 One of the things I did with my interview with Tim Schafer was allow some community members to offer questions to ask the guy. I liked what DaedHead8 and Krow asked: How is Tim able to be so creative, and how does he get those creative juices flowing? After all, this is the the mind behind much of The Secret of Monkey Island, Full Throttle, and Psychonauts, as well as Brütal Legend. So, I asked him.

Schafer offered his theory on how he remains creative, saying, “I always believe there’s, like, a goose in your head, and the goose either lays golden eggs, or it doesn’t.” He then related an anecdote about how it was during the development of The Secret of Monkey Island that he allowed his creativity to shine, where apparently stupid ideas of his were the most brilliant. This is where the three-headed monkey was born.

He actually gave some pretty sound advice for anyone trying to be creative. For those people, within videogames or not, he offers this: “I learned that there’s this internal sensor you have in your brain that kills your own creative ideas because you are afraid other people will laugh at you … And you are afraid someone will come by and say to you, “That’s WRONG!,” so you censor yourself.”

He continued by saying, “Doing that experience with Monkey Island is what taught me that, ‘No, actually, you’re right.’ The stupid ideas that you have are often the best you have, and who cares what anyone else thinks about them? … So take those dumb ideas and run with them.” He finished by declaring, “That’s what I would encourage people to do: run with their stupid ideas more.”

It’s a pretty encouraging thing, to hear a central figure in the industry offer such positive advice. I don’t want to be a downer, but it’s not often we hear someone encouraging the running with stupid ideas. It really is a testament that if someone like Tim Schafer can do it, anyone can.