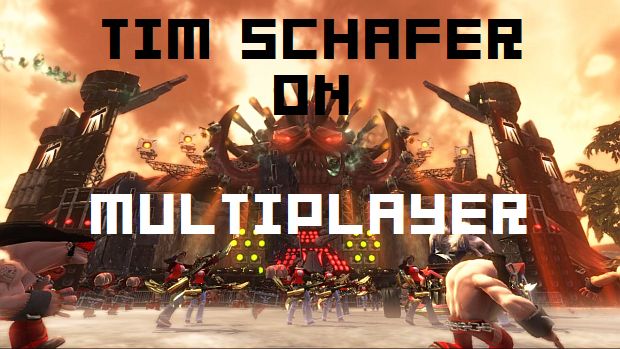 Hopefully, by now, you’ve had the chance to take a look at Hamza’s preview for the upcoming Brütal Legend. Now, while he was getting some solid hands-on time with the multiplayer, I was, uh… getting some solid, uh… one-on-one time with the man himself, Tim Schafer. To say that our discussion was awesome is an understatement. Like his games or not, that man is a very cool member of the gaming industry. Definitely look out for that full interview early next week.

In the meantime, I want to share with you some of the interesting tidbits of information I gleaned from Schafer. First of all, notice that the hands-on Hamza had was a 1v1 affair. Certainly fun, yes, but is there something more? Yes, actually: a full 4v4 battle mode. How’s that play out compared to Hamza’s experience?

Well, it’s definitely a cooperative affair. Schafer described it by saying, “You get on team chat, and you hopefully agree amongst yourselves that, ‘okay, I’ll take care of maybe the resource building, you take care of harassing enemy troops.’ Or maybe you all do everything at the same time. It’s really up to the players to decide how to split up the duties.”

Other reps from Double Fine also told me that the co-op multiplayer modes are actually a bit easier, as duties are now split, although matches can end up being very chaotic. Interestingly, Double Fine is forcing friends-only play, a conscious decision to avoid the destined-to-fail nature of random co-op.