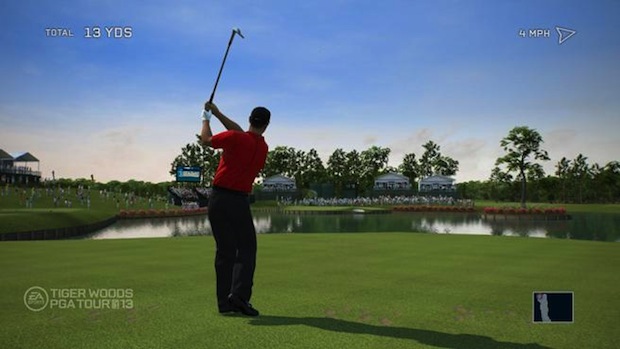 It sounds like Tiger Woods PGA Tour 13 will be the most Kinect-y Xbox 360 game yet. A new blog by one of game’s designers, Eric Busch, says that they worked to make sure that you’d never have to touch a controller to play PGA Tour 13 with Kinect. Even meny navigation is done with a swipe mechanic, giving 4-way scrolling control. Voice recognition lets you say anything within menus in quotation marks for easier navigation.

In the game, you’ll zoom in and out of your landing area by raising your left hand to your brow. Aiming is done by reaching out your right hand to grab the aiming marker, and then dragging it around. Stance, control and ball spin are controlled in similar ways. You can even crouch down to get a better look at the lie.

The swing sounds like it works like real golf, except that you’re swinging in the air without a club. The blog says that the length of the backswing combined the speed of the forward swing will determine the power. On the more advanced settings players will need to watch their form to prevent hooks and slices. I just hope it doesn’t ‘see’ my angry gestures when I flub up a hole.

The motion-controlled Tiger Woods titles had great control, so I’m expecting this Kinect integration to be just as tight. I’m looking forward to getting my hands on…well, you know what I mean.