A game this simple shouldn’t cause this much stress

When Rez first came out in 2002, I learned a new word from its marketing campaign: Synesthesia. Basically, it means that one of your senses is being triggered by something it normally wouldn’t, so you might get the sensation that you’re hearing a color or touching music. Anyone who’s played Rez knows the feeling of trancelike focus that comes from a good run, but it’s an experience that isn’t easy to replicate.

There was a spiritual sequel to Rez in 2011 with Child of Eden, but despite the improved visuals, I didn’t get the same feeling until I loaded up Thumper a few days ago. I’m not sure what I was expecting from a game that billed itself as “Rhythm Violence,” but after playing for a bit, I’ll be darned if the developer, Drool, didn’t deliver on that promise.

Thumper is a great example of a game that doesn’t need a story. Your space beetle avatar careens through a psychedelic tunnel stuffed with hazards that match up with the beats of the oppressive music that plays in the background. You can mess up once per level, but any more than that and your beetle explodes into chunks and you’ll start the level over. It plays a lot like a Rock Band or Guitar Hero title since you’re constantly watching the tunnel ahead of you for the next prompt and doing your best to hit it on the beat.

It sounds simple, but there’s no denying this is an intense experience. Playing well requires your full attention at all times, and you’ll feel it in your guts when you mess up a turn or fail to boost through a barrier. It’s hard to describe how deeply this game tapped into my fear center. In fact, I was a little shaken by how Thumper grabbed hold of my brain on a primal level. Fortunately, Breath of the Wild‘s low stress, pastoral setting was able to provide a quick antidote. 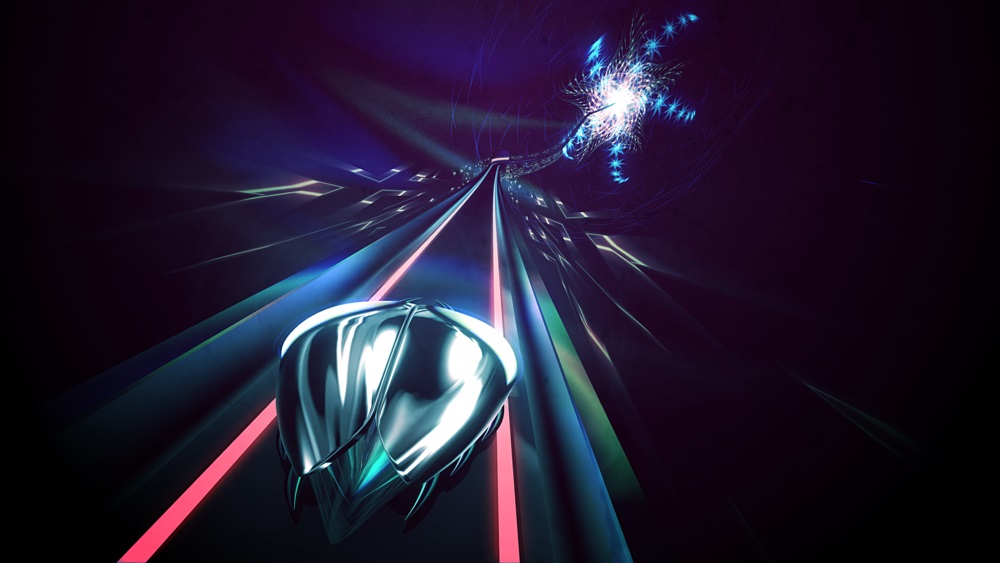 The Switch version adds support for HD rumble, which makes it all the more immersive when your poor space beetle flies to pieces. Being able to go portable in handheld mode is always a nice feature, and the framerate doesn’t suffer for it. I did find it a little harder to see what was coming up ahead of me on the smaller screen, but it didn’t seem to affect how often I screwed up. Having a good pair of headphones is a must, though, and this might not be a game you’d like to play on a bus or a car trip. It’s much more suited to a dark night in bed where all you can see is the screen and the track ahead of you.

Thumper is a welcome addition to the Switch’s library, but for people with access to multiple systems, it may not be the ideal way to experience the title. While it plays great in both docked and handheld modes and maintains a solid 60 FPS throughout, a game like this is enhanced considerably if you can shut out the outside world and give it your full attention. It seems ideal for virtual reality setups, and I’d imagine playing on PlayStation VR, Vive or Oculus Rift is a much more immersive way to experience Thumper. For those without access to a VR-capable system however, Thumper on the Switch is an easy game to recommend.

[These impressions are based upon a retail version of the game provided by the publisher.]