Levine is talking about BioShock Infinite — more specifically, the raven-haired girl we first met when the game was revealed back in August of last year. Her name’s Elizabeth, and Infinite‘s world is all she’s known since the age of five. Held captive in a tower by a hulking, mechanical, winged creature known as The Songbird, Elizabeth wants to be free from the confines of the only home she’s really known.

Her savior is Infinite‘s protagonist, Booker DeWitt. A former Pinkerton agent now down on his luck and buried in gambling debt, he takes on a job that sends him to Columbia, a hidden city floating in the sky. His job: safe delivery of Elizabeth to New York, with payment on arrival. He soon learns that his task isn’t quite cut and dry, with Elizabeth possessing great and mystifying powers that puts her in the center of a struggle of ideals that is tearing apart Columbia.

“All she wants, like any young woman, is to control her destiny,” explains Levine. “She wants to live in the world.”

The Songbird has different plans, and will seemingly stop at nothing to return Elizabeth to her prison in the clouds. In this early peek at Infinite‘s E3 demo, Irrational reveals a bit more about Elizabeth’s abilities, and peels back the first layers of what may be the most complex mechanical bird/female relationship that gaming has ever seen. 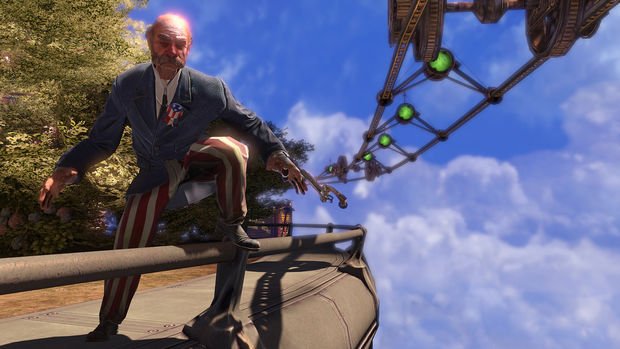 The demo opens with DeWitt and Elizabeth exploring a small shop, “Major’s Notions, Sundries, and Novelties.” It’s littered with antique-looking knickknacks and trinkets celebrating the history of the United States. American flags are draped on the walls, faux-gold busts of the nation’s Founding Fathers sit on shelves, and red, white, and blue fireworks sit for sale in baskets.

DeWitt searches the shop, picking up items that he places in his inventory, including a small pistol he finds sitting on a shelf.

“I really wanted people to understand that this is a BioShock game,” explains Levine, “this is a game about looking through a place with nooks and crannies, and finding that kind of stuff.”

“That’s a big part of a BioShock game,” he adds.

We also see Elizabeth and DeWitt interact for the first time, setting the groundwork for their developing relationship. As DeWitt explores the abandoned store, the young girl marvels at the items on the shelves. She picks up an oversized Abraham Lincoln mask and places it on her head.

“Hey Booker,” she calls out, grabbing his attention, doing her best impersonation of America’s 16th president. “‘Four score and seven years ago!'”

The quiet and lighthearted atmosphere is soon interrupted. The shop darkens and its windows start to rattle as a quake shakes the entire room. Elizabeth dives behind a table, repeatedly whimpering the word “no” as she kneels down to hide: it’s The Songbird. It peeks its eye through an open window of the store, bathing the interior in a strobe light of orange and green as it searches for Elizabeth. The sounds it’s making are a terrifying mixture of nails on a chalkboard, shrieking newborns, and grinding gears.

When The Songbird is convinced all is clear, it moves on, leaving in its wake a deafening silence and a shaken Elizabeth. DeWitt approaches her and offers reassurance.

“Elizabeth,” he says tentatively. “Elizabeth, I will stop him.”

“That is an oath you cannot keep,” she says, unconvinced, choking back tears and reaching out to grab his hand. “You promise me that if it comes to it, you will not let him take me back.”

She then moves DeWitt’s hand to her throat, indicating his agreement to a fatal promise of mercy. Before her chaperone can reply, she heads out of the shop, and there’s no choice but to follow.

When he finds her, she’s lying on the ground with an injured horse, softly singing “Hush, Little Baby” to the wounded animal. DeWitt at first seems frustrated at the scene, wanting to move along. 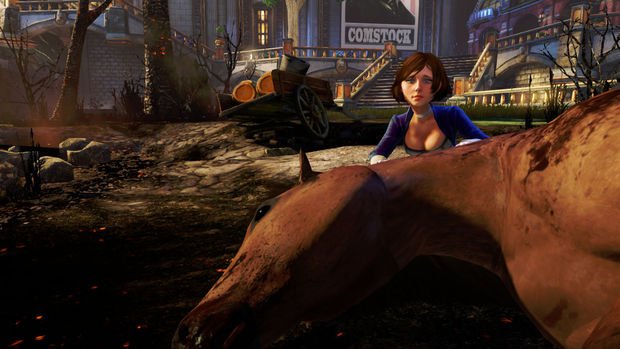 “Not for long,” says DeWitt as he cocks his gun and points at it at the animal. A choice appears on the screen as a button prompt: “Euthanize Horse.” He doesn’t get the chance, as Elizabeth interrupts.

Here we get the first look at her power, which allows her to manipulate tears in reality that are scattered throughout Columbia. While everyone can see them, it seems only Elizabeth has control over the mysterious shimmering tears. Problem is, she’s not yet come to full grips with her abilities, and is finding the results unpredictable. She assures DeWitt that she can “control it this time,” and despite protest from the man with the gun, she attempts to work her magic regardless.

This is where things get weird: as Elizabeth invokes her power, a ring of light spreads out among the area in which she, the horse, and DeWitt stand. It appears she’s literally tearing through reality — possibly through time — and you can see the horse twitching, life returning to its body.

Things quickly go south as Elizabeth loses control, and both she and DeWitt find themselves standing on what appears to be an abandoned city street. In the background, you can faintly make out Tears for Fears’ “Everybody Wants to Rule the World” (released in 1985) playing. A movie theater’s marquee on the street reads “Now playing: Revenge of the Jedi,” the working title for the third Star Wars film, Return of the Jedi (released in 1983). You can hear police sirens in the background, growing louder and louder.

“I’m trying,” Elizabeth cries, as she struggles to control the tear. She manages to close it, returning them to Columbia, as a train car that’s tearing down the street nearly flattens them both.

“What was that?” says DeWitt breathlessly. “Talk to me, Elizabeth.”

“You were right,” she says, sobbing. “I can’t control it. It’s not possible.”

“With what just happened,” replies DeWitt, “you really want to take bets on what’s possible?”

If Elizabeth has any idea what her powers are really doing, she’s not letting on just yet. Clearly, she has little control over what she’s capable of, and very much wants answers. She believes they lie with Z.M. Comstock, one of the founders of Columbia, and that’s to whom she and DeWitt are headed. 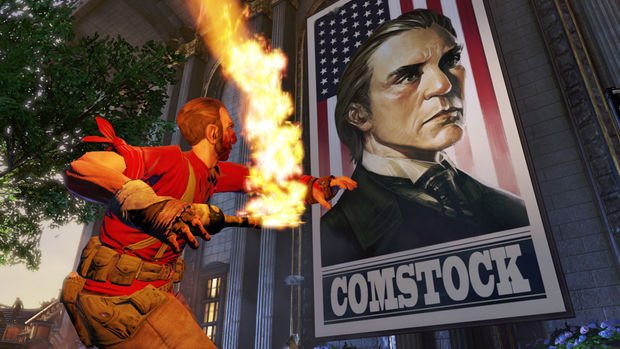 Getting to him, to the massive Comstock House that can be seen off in the distance, is easier said than done. A war is brewing between Comstock’s own followers, The Founders, and the opposing Vox Populi. It’s evident as DeWitt and Elizabeth make their way deeper into Columbia. You see a man getting bullied and kicked down a flight of stairs. Another is mugged. A man of questionable character calls out to Elizabeth as she passes by.

“Hey little girl,” he says in a catcall, singsongy voice. “Where you going? C’mon!”

Booker points his gun in his direction, “Listen, friend, we’re not looking for any trouble.” The man shrugs and gives them both the finger before walking off.

Moving on, the pair comes upon an execution. A man sits up on a podium, awaiting his fate. The player, as DeWitt, has an option to step in and stop the event with the press of a button. In our demo, he does.

The focus is now on DeWitt, as the mob then turns on him, signaling the start of the first gameplay action we’re shown. The mob draws firearms and begins shooting in DeWitt’s direction. Elizabeth shouts out to get your attention as a man runs for an alarm to signal for support. She organically provides real-time battlefield updates throughout, too: “take cover,” “on your left,” “Booker, look out, he’s going for help!”

Her power to use and control tears also comes into play. At one point she notes various tears in the environment during battle, and asks Booker which one he wants her to pull through. The player makes the choice — it can be ammo, a turret to use against enemies, a cache of weapons, or even a member of the opposing faction to distract the enemy. At first, as in this early battle, she can only bring objects through a single tear at a time before having to cool off. These choices, Levine says, are one of the ways in which players can tailor their gameplay experience.

“It’s just another part of the toolset,” he explains, “and maybe later on in the game, Liz can open two of those [tears] but there will be five options. And as the game goes on, she gets more and more confident in her abilities.”

In this battle, we also get our first look at how Columbia’s Sky-Line will play out in combat. These rollercoaster-like rails in the sky provide a way to quickly move freight throughout the city, but can also be used by DeWitt and will play a huge part in combat. What we see is a psychotic flurry of action, with the Sky-Line twisting and turning through the air. DeWitt is able to shoot at enemies (who are also using the rails) while attached, hopping from one to another. 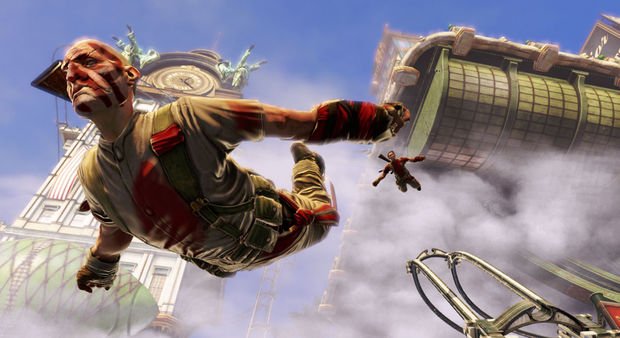 A giant zeppelin in the sky is providing air support for the attacking Vox Populi, and DeWitt makes it his target. At first, he reaches for an RPG and fires at the floating craft in the sky. But the better choice, it seems, is to tackle it head-on. Using the Sky-Line, he moves up towards the zeppelin, heading inside to destroy its core and taking it down. As the burning aircraft descends, he hops on the Sky-Line back down towards Elizabeth.

She takes the words right out of my own mouth. The action was fast-paced, looked tight in motion, and grand in scale as it seemingly took place over a massive cross-section of Columbia itself, both on land and in air. One thing that was obvious is that the focus was on the battle, and not on protecting Elizabeth — she can handle herself.

“We do not want you running around protecting her,” says Levine. “Down that way lies peril. You actually saw at the end, it comes really quick, in the end you actually see her kneeing some dude in the balls who kind of came at her. So she can take care of herself.”

“She’s also a very powerful woman,” he adds, “and there’s lots of things she can do to protect herself.”

The reunion between DeWitt and Elizabeth is short-lived, as The Songbird quickly re-enters the picture. He comes out of nowhere, swooping in to grab DeWitt and tossing him to the side like a child’s toy. Not content with simply moving you out of the way (which included throwing you through the roof of and into a structure), he approaches to finish the job. 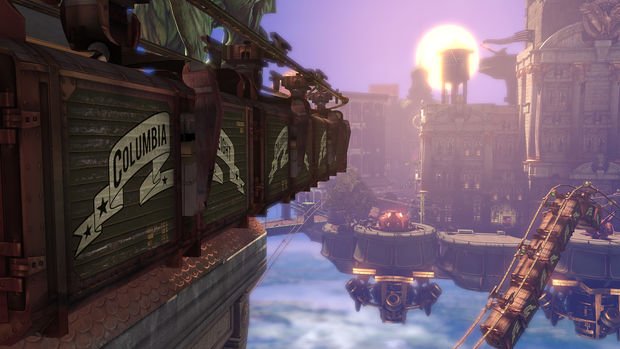 “Stop it, don’t hurt him,” Elizabeth pleads, standing in between the 30-foot-tall mechanical monster and DeWitt. The creature stops in its tracks, listening intently to the young girl.

Elizabeth is terrified of the creature, earlier insinuating she’d rather die than return with him. Now, in the face of DeWitt’s death by its hand, she seems resigned.

With The Songbird taking off with Elizabeth in her grasp and DeWitt giving chase (on the Sky-Line, of course), the demo ends. It’s the perfect kind of tease, a sequence that seemingly only scratches the surface of what BioShock Infinite will ultimately have to offer in terms of both gameplay and narrative. It’s also the kind of thing that will keep players up at night, as we all wait patiently for the game’s 2012 release.

“There’s a lot of mysteries in this game,” he continues, “and, you know, I’m trying to be very protective of that. But we want to give you guys enough to start thinking about the direction we’re going in.”