Back in the days of the PS3, Sony released a whole load of PlayStation 2 games for people to buy again (because who needs backward compatibility?). They had some pretty good stuff up on offer, but unfortunately none of those games have made the leap over to the PlayStation 4 yet.

However, if recent ratings by PEGI are to be believed, that might be changing very soon. PEGI is the Pan European Game Information board, which is how games are rated across Europe. Some of their most recent ratings include Ape Escape 2, Dark Chronicle, and Twisted Metal: Black for PS4.

The list changes as new stuff get rated, so here is a screenshot showing the three games on the PEGI site: 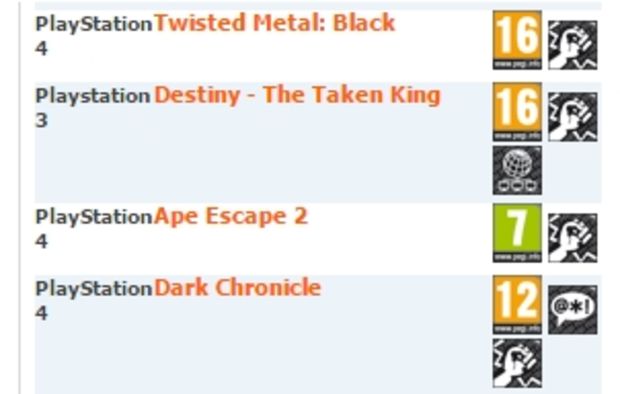 Of course, we don’t actually know anything until Sony officially announces them. Hopefully they will give PS2 games cross-buy, so those we’ve already bought on PS3 carry over, but right now it’s anyone’s guess.

Any other PS2 games you’d like to see come to PS4?