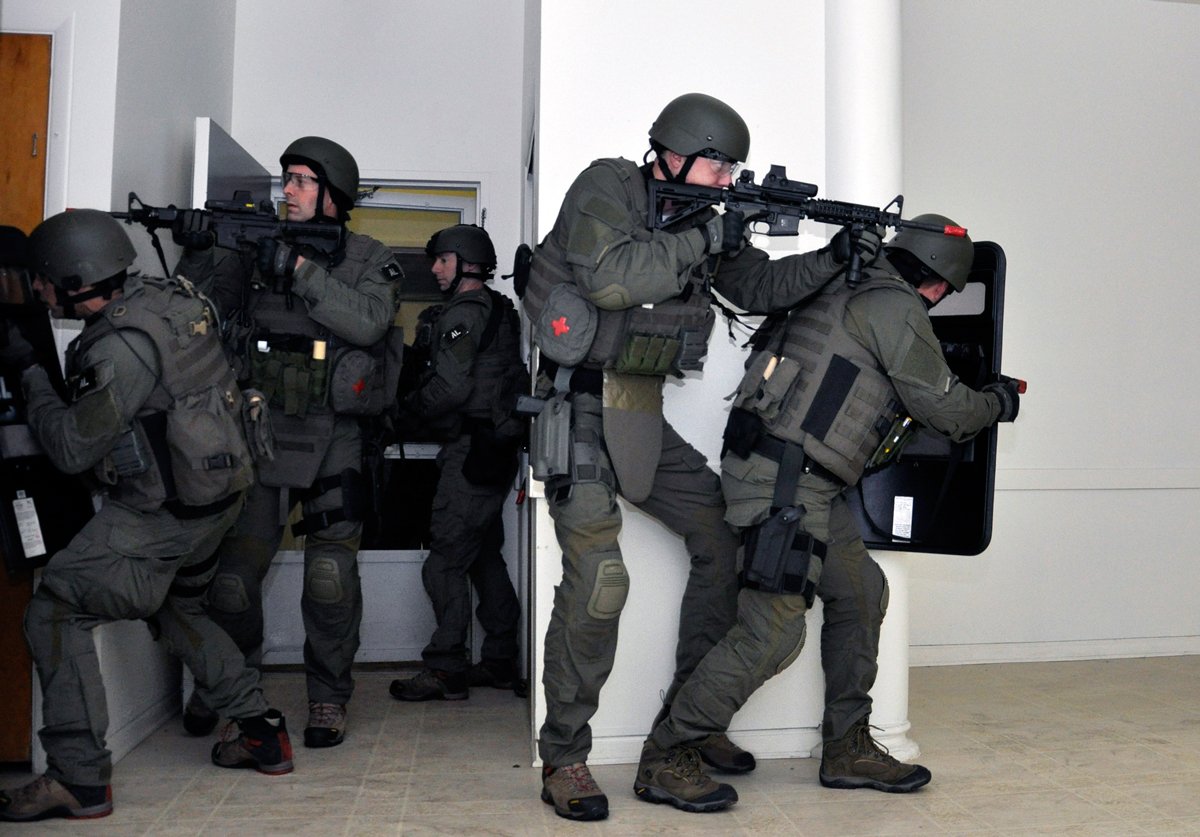 I think I speak for everyone when I say: knock this shit off

Three people are looking at federal charges in the US in connection with the death of Andrew Finch, 28, outside of his property after a SWAT team was called to his house. Tyler Barriss, who went under the handle of “SWAuTistic”, has already been charged with making the hoax call that led to Finch’s house being “swatted”. He already has a history of calling in hoax bomb threats to schools and a local TV station, which saw him spend two years in a county jail.

The co-accused, Shane Gaskill and Casey Viner, had an argument over a mere $1.50 bet on a Call of Duty game. Viner decided to enlist Barriss’ services to get back at Gaskill, given that Barriss was, at the time, allegedly operating as a swatter for hire. This would be bad enough, but Gaskill apparently tricked the pair by giving out his old address, a house which his family had since rented out to another family.

Cue a SWAT team arriving on scene at the Finch household, believing that the occupant had murdered their father, had the rest of their family at gunpoint and was threatening to douse the entire property in petrol. Andrew Finch was understandably unaware of what was going on and reached for his belt when he was stopped by the police, resulting in an officer shooting him. Andrew Finch was unarmed, and died from his gunshot wound.

Barriss has now been charged with involuntary manslaughter, a charge the prosecution goes for when there is sufficient evidence of causing death by way of reckless or grossly negligent behaviour. Presumably, Barriss is not facing a murder charge because it is unclear that he intended the death of Finch or whoever he swatted. He is still looking at up to eleven years in prison under Kansas sentencing laws.

Viner and Gaskill are looking at similar charges and sentences, given that they facilitated the shooting of Finch but presumably did not intend to kill or severely injure him, or there is probably not enough evidence of such intent. The police officer in question may also be facing charges for shooting too rashly, but this has not yet been decided.

The case is being looked at by tech journalists around the world as an example of how criminal law is responding to new and unusual behaviour involving gaming and streaming: not just because it is a clear-cut case of the worst possible outcome from swatting, but because of the utterly senseless and horrifying nature of the circumstances surrounding the death.

What is swatting and when did it start?

Swatting is the practice of calling in a fake bomb threat, assault or other serious crime, prompting an entire police squad to break into someone’s residence. It is closely associated with streaming, with malicious viewers getting hold of the streamer’s address (usually through doxxing — finding the address through researching social media sites or even illegal methods such as hacking) and ringing in the police so that the incident is caught live on webcam.

Depending on the unit called in, the streamer may be forced to the ground, handcuffed and have guns pointed at their face. Of course, people respond differently to this sort of unexpected stress, which, combined with an officer who is quick to shoot, can end in tragedy.

According to Know Your Meme, the specific term came into use in December 2007, though calling in fake threats to the police with various motives has been around for much longer. If you search YouTube, there are a bunch of videos showing streamers around the world finding themselves suddenly staring down the barrel of an assault rifle; it is by no means a practice confined to the US. For the sake of not glamourising the act or turning it into entertainment, because it really, really, REALLY isn’t funny, I won’t link to the videos here, but they are readily available on the internet if you’re inclined to take a look at swatting in action.

Why do people do it?

Why do people harass other people on the internet? It’s a question that’s been asked ever since the internet became a widespread means of communication. Maybe it’s the fact that talking to people online makes you forget that you’re dealing with human beings. Maybe if you combine immaturity, lack of empathy and the ability make anything happen at the touch of a button, horrific acts are the natural end result. Motives such as revenge and jealousy may also come into play when it is not third-parties who are getting injured or even losing their lives.

There’s also the attention factor that is massively magnified compared to the usual hoax 911 threats. Barriss himself has apparently said that he enjoyed evacuating buildings with hoaxes, since it would end up on the news. Everything is caught on camera, so the swatter can see the fruits of their labour in real time. Take that line of thought and a famous streamer who they perhaps envy because they get a ton of subscribers, or they think are getting attention for all the wrong reasons, and it is instant gratification for the sort of people who are wired to enjoy intensely vengeful acts.

It must become addictive like any other dangerous behaviour. I don’t really know how to respond to people who find this practice alluring and cannot help themselves, except for to say if they find taking risks intoxicating, they should take those risks with their own health and well-being, and not with the lives of others.

Is swatting itself a criminal offense?

Depending entirely on jurisdiction, there may be analogous offences to swatting, but the law is not quite modern enough to recognise it as its own crime (except in Kansas, where an anti-swatting law has already been passed in response to the case). Wasting police time is universally recognised as some sort of criminal offence, as is any act that recklessly puts life and limb at risk (either as a form of assault or as involuntary manslaughter: see above regarding Barriss’ charges).

However, there is a strong case for making swatting its own criminal offence. Not only is it an act of harassment and a threat to the safety of the person targeted, but it is an act of humiliation. Swatting is not a private act, meaning that everyone watching the stream may see the target being pushed to the ground or carted off in handcuffs; that may damage their reputation or result in them being taunted for weeks.

It also puts the target in fear of gaining a criminal record, which could have all sorts of repercussions for the streamer (not least if streaming is a pastime/second job, and they have a day job that requires a clean criminal record). Hopefully, a small amount of good can come out of the terrible Finch case through swatting becoming its own criminal charge.

Me too. I can’t imagine why anyone would do this to a streamer when they are 100% sure they have the right address, never mind where there is a significant risk of swatting a complete stranger. I’ve left aside the issue of how police react when a hostage situation is called in, because I don’t feel like I can comment on the police in the US, as someone who lives in Europe. But I’m sure there will be plenty said about that by people who are more knowledgeable than me in the comments.

It’s worth remembering that the proportion of people in the gaming community who commit such atrocities is minute, and a large number of people don’t even stoop to mild name-calling. But the practice of swatting is so egregious that it does bring shame on streaming and the gaming community as a whole, particularly when those affected by it are outside of that community. We owe it to ourselves and society as a whole to reflect on how we can stop people being absolute pricks on the internet, or at least limit the damage that such pricks can do.

One answer is to report, report, report. The chances are that those who call in hoax crimes to the police don’t stop there; they will pick other methods to harass and humiliate people online. And don’t just stay quiet because you’re not the victim – if you spot someone else being backed into a corner and don’t feel like they have the resources to act for themselves, do what you can to report it, within the limits of the social media platform where you see the harassment.

Unfortunately, some sites have worse harassment guidelines than others, but if it renders at least one swatter toothless, it’s worth it. If the means to report are terrible, give feedback that abuse reporting needs urgent improvement, and hopefully, enough voices speaking up at once can turn the tide.

Also, don’t be tempted to think that swatting is funny if nobody actually gets hurt, or if the target is some obnoxious internet celebrity who you don’t like. The shock of having the police hammer down your door for no reason whatsoever is not something that anybody deserves, and by finding amusement in it, you are encouraging the act to happen to others.

I think the big message that we can take away from when “swatting goes wrong” is to be kinder to each other, both off the internet and on. You never know when something completely senseless like this is going to happen, and even the most vitriolic of squabbles are not worth someone losing their life.

So, try to take a step back from your computer screen when you feel anger rising. Even if you would never, ever think of going to the lengths that Viner went to in order to get back at a random username you’ve argued with, it’s still worth walking away and taking a break when the urge to launch into a tirade rises. We’ve all been there, when we want to sound off at someone online, but is it really worth it?

When something like this happens, I don’t really see the point in getting angry on the internet anymore. Coming to my hobbies and pastimes from a place of anger is never worth the poor trade-offs, even if they aren’t as drastic and life-changing as what happened in the Wichita swatting case.