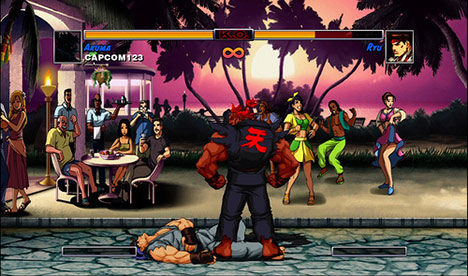 For those of you who have been eagerly awaiting Super Street Fighter II Turbo HD Remix, like I have, the screenshots attached to this post will surely cause your pants to tent. Capcom has just put out three brand-spankin’-new images of Akuma in all his high-definition glory, and they look just as awesome as all the other screenshots we’ve seen so far.

Just seeing Akuma standing there with Ryu lying at his feet, along with a purple-hued sunset in the background at a tropical resort, has reinvigorated my anticipation for this game. The second image features Akuma flying toward Ryu on Fei Long’s stage, and the third shows Ken flying backward from a two-hit Akuma combo on Zangief’s stage. You can check out all three full-size shots below, or head over to Lost @ Capcom’s Flickr.

[Via Capcom US Blog]