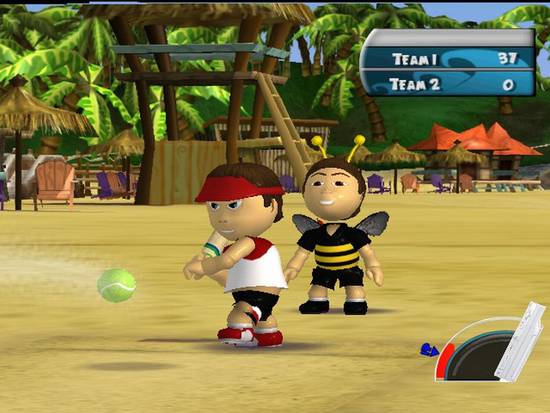 I’m not a big fan of any of it. So using the words “big,” “beach,” and “sports” in the same sentence usually turns me into a snarling werewolf, and then I straight away transform back into a human being. Then I’m standing in front of you naked while I drool all over myself, and it’s always a very uncomfortable scene.

Fortunately, that didn’t happen when I played the Wii exclusive Big Beach Sports at THQ’s Wii Day in New York City. I’m not sure the chic Hudson Hotel is equipped for that kind of thing, anyhow, and I’m pretty sure THQ doesn’t have the insurance to cover those kinds of shenanigans. Here’s what did happened while playing Big Beach Sports: my wife kicked my ass in bocce ball. 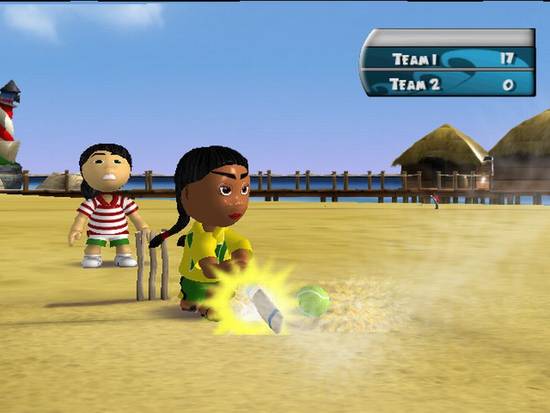 Big Beach Sports is one of those casual Wii mini-game titles that’s supposed to be fun for the whole family. Games that are easy to pick up and play, but you’re told each has its own intricacies and depth that should keep it exciting for gamers who are looking for more. You’re not quite sure if you believe it, because your three-year-old niece has been kicking your ass in whatever-the-fuck game for the past half an hour, and you have a dreadful headache because of it. But you do find that making subtle wrist movements while making more sweeping movements does something, so maybe they’re right, and your niece is just a better whatever-the-fuck player than you are. And that gives you a headache, too.

So that’s really Big Beach Sports in a nutshell, and if you’re totally prepared for that experience, it might not be a bad thing. The game takes six sports — volleyball, soccer, American football, bocce ball, disc golf, and cricket — and puts them on a virtual beach resort inside your house where they rightfully belong. Each game uses only the Wii remote, and will have you doing all of the same motions that we were trained to think were innovative by Wii Sports — underhand tossing, swinging, bumping, etc.

Volleyball, for instance, is a two-on-two affair. Holding the Wii remote in hand, you serve the ball as if you were to serve a really volleyball. You spend no time thinking about making sure your players are near the ball; their A.I. makes it so, and you’re simply required to set or pop or push or whatever it is they do in this game to get it back over the net. This goes on until someone can’t use their arms any longer or is attacked by a grizzly bear or a flying piranha, and misses the opportunity to return the ball. 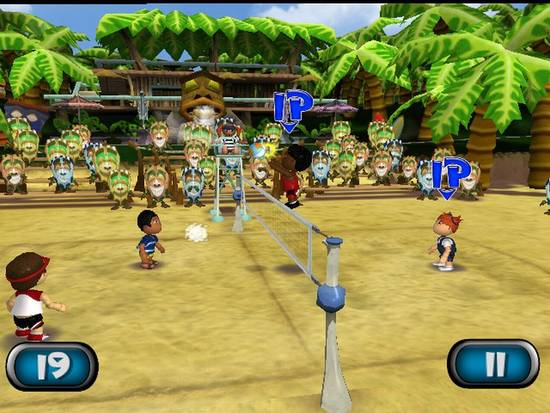 My wife Debbey and I played a bit of bocce ball, and while I lost (four times!) and neither of us could figure out the rules (note: no one at THQ knows the rules of bocce ball either), we had a bit of fun. The gameplay mechanic was much like that of bowling in Wii Sports, where you’d use the d-pad to set the angle of the toss or the direction of your character. Unlike Wii Sports bowling, you simply must pull your arm back and “roll” forward; you needn’t press or release a button. The result feels a bit more natural, but you also end up tossing your balls in all directions, even when you don’t mean to. The game is months from releases, so there’s plenty of time to tweak the controls, and I’m not worried that it won’t feel like real bocce ball when it ships (although who in the hell would be able to tell the difference?).

Visually, the game is quite a bit what you’d expect a third-party “casual” Wii game to look like – bright and colorful, with odd little super-deformed characters that look either better or worse than, but are not your own Mii. Why Nintendo keeps leaving third-parties up to their own character creation devices is beyond me. The characters in Big Beach Sports not only don’t have the same iconic look as Nintendo’s Miis, but they’re downright ugly, with some questionable animations to boot. A plus: one character was wearing an ultra-sweet bee costume, and another was dressed like some sort of bear.

This summer, when you’re sick of bowling, golf, boxing, baseball, and tennis, but you still don’t want to leave your house, THQ may have what ails you.  At the right price, something like Big Beach Sports could probably find a nice home in someone’s “casual” Wii collection.

Now can someone please explain to me the rules of bocce ball?