Last week, I headed out to the Royalton Hotel in midtown Manhattan — yes, the same one that’s mentioned in Kurt Vonnegut’s Slaughterhouse-Five — for the 2008 THQ Holiday Junket (and no, I have no idea why they called it that, either). I played and/or had demoed to me multiple games, and I’ll be bringing you good folks my thoughts on said games for the next few days.

First up is Deadly Creatures, a third-person action thriller game that’s being developed for the Wii by Rainbow Studios, the people behind the PS2’s ATV Offroad Fury games. It’s quite unlike anything I’ve ever seen before: the game takes place in a desolate desert environment, and you play as either a scorpion or a tarantula. Obviously, this game isn’t for the squeamish; you’ll encounter various other insects and arachnids, and you can kill them (and subsequently eat them) for health.

If you haven’t turned away in disgust and are still reading, hit the jump for my impressions of Deadly Creatures. 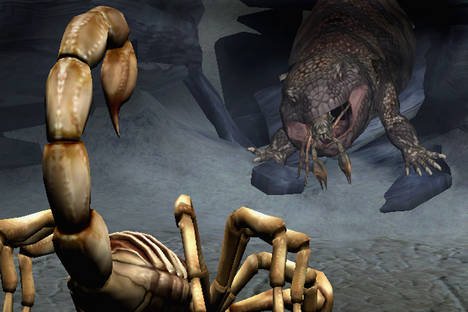 Each of the two playable arachnids has a completely different skill set and play style: the THQ PR person told me that the scorpion is tank-like and can burrow into the ground, while the tarantula is geared toward stealth. Your moves can be upgraded by solving puzzles and challenges, and you’ll unlock special abilities as you progress through the game. The tarantula, for example, will be able to spin a web and swing from it, Spidey-style. You don’t have to pick one or the other, though; the story features different levels designed for the two creatures, so you’ll be playing as them both the whole way through. All of this is controlled by the Wii Remote and Nunchuk, of course; motion controls are used for specials and finishers.

The game’s boss battles are very cool. I got to watch one where the demoer played as a tarantula and took on a rattlesnake, and I was told that most battles would take on the same “David vs. Goliath” format (the rattlesnake is a lot bigger than you). For example, some of the game’s other bosses include a Gila monster and a tarantula hawk (I had no idea what that was until I looked it up — it’s a wasp that hunts tarantulas).There are ten bosses in all, and they’re pretty difficult; the demoer died twice before he was able to defeat the rattlesnake. Apparently, you’ll even go up against humans in the game’s later stages.

I wasn’t able to get much information from the THQ guys regarding the game’s story, but what they were able to tell me certainly sounds fascinating. Essentially, a story involving humans takes place around you, and you see everything from the beady little eyes of the arachnids you’re playing as. The press kit talks of a “gripping, indie-film inspired story of human betrayal and greed,” and really, who can pass that up? 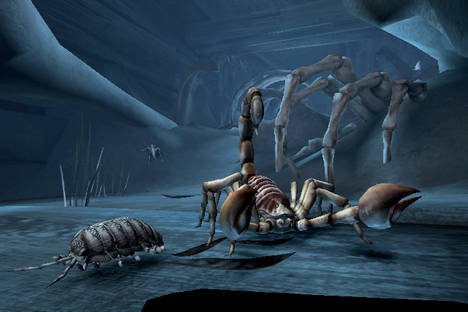 I was most intrigued by Deadly Creatures because it’s a rarity on the Wii: a single-player-only game that deals with some scary stuff. The game hasn’t been rated yet, but I certainly wouldn’t suggest buying it for your kids — unless, of course, they’re budding entomologists. Check it out for yourself when the game hits stores this October.