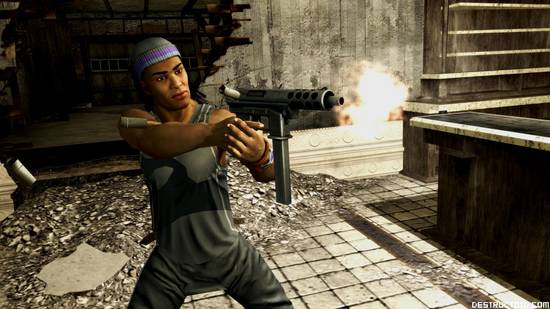 It’s really just a bizarre twist of fate that I happened to have a chance to play both Rockstar’s Grand Theft Auto IV and Volition’s Saint’s Row 2 during the same week. Volition’s near-launch Xbox 360 open-world driving/shooting/crime-spree simulator was a solid title, but garnered more than a few comparisons to Rockstar’s now classic series. Some went as far as to call it a “good Grand Theft Auto ripoff,” and for good reason — it kind of was.

But when Saint’s Row 2 ships to stores on August 26, gamers are going to find that those comparisons, in many ways, are no longer apt. Put it this way — if Rockstar’s this-gen iteration of GTA is a $200-a-head Las Vegas illusionist performance featuring Pamela Anderson, then Volition’s sequel is a balls-to-the-wall, over-the-top Coney Island sideshow starring a limbless, glass-eating female midget named Senorita Cobrita. To be clear, one approach isn’t necessarily “better” than the other, and it’s evidently Volition’s intentions for Saint’s Row 2 to be the most ridiculous gangster/crime fantasies in videogames. A faithful adaptation of violent street and gang life this is not.

As for the phrase “balls-to-the-wall,” it gets thrown around a lot, but in Saint’s Row 2 they’re taking it literally. Morbid curiosity forces you to hit the jump. 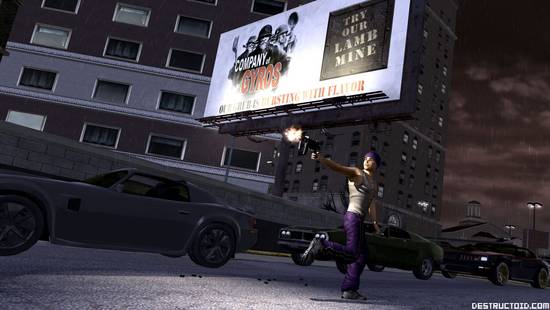 The sequel picks up 15-years after the events of the first title, in which the game’s main player-created character (spoiler alert, folks!) is double-crossed and caught in a devastating explosion. Not dead, but severely disfigured, you wake up in a hospital and due to the miracles of re-constructive surgery are given a second chance at the gangster’s life. This is the perfect set-up for Saints Row 2’s new, deeper character customization.

So about that “ball” thing I mentioned earlier — in the first game, you were only given the option to create a male character. In Saint’s Row 2, the depth of customization has expanded with the addition of a pair of X chromosomes. But if you’re supposed to be playing as the protagonist from the first title, how is that possible? Simple answer — you lost your balls in the “accident” that closed out the first game. Starting with a clean slate, the miracle of modern medicine has given you the choice — would you like to sit or stand while peeing? While I wasn’t able to confirm the “your balls came off” plot device with the folks at THQ or Volition, there’s really no other reasonable explanation, is there?

With Saint’s Row 2’s character creation — the first thing you’ll be asked to do when you start your first game — Volition seems to have taken a page from the book of another popular THQ franchise, Smackdown vs. Raw. The level of customization is astonishing, with modification sliders for every possible nook and cranny of a face and body that you could imagine, and some you probably couldn’t. While creating my character for my demo run, I found one particular slider that seemed to determine how more or less male or female your character would appear. While I had determined early on that my character would be (an extremely ugly) female, moving the slider far enough along stripped my character of the default pink bikini and replaced the chest with that of a man’s … but kept the female features in the face. The end result was frightening and a bit upsetting, but a good indicator that the game will let you loose to do as you see fit. (In the end, my character was an obese, dark-skinned man/woman/thing with a Fu-Manchu-style goatee and beard.) 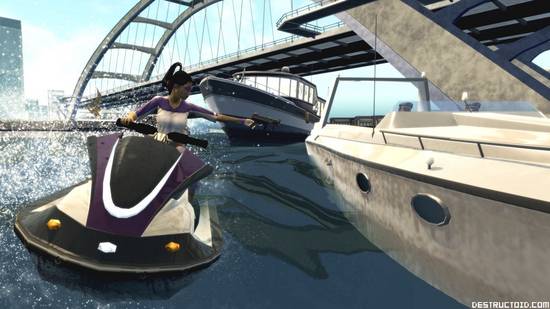 Once my look was complete, it wasn’t over — I’d have to pick a taunt. Not an easy task, considering there are dozens of taunt animations, each one more inappropriate then the next. Flipping the bird, taking an imaginary dump, making a “jerking off motion” with your hand … you get the idea. A lot of these taunts can be seen in some of the new Saint’s Row 2 marketing spots that must have had THQ’s marketing department working over time. Called “Gary Moments,” these spots feature none other than the certifiably psychotic actor Gary Busey, as he cackles and howls about pissing off “hardcore gangbangers.”

Once my thing-out-of-a-nightmare was completed, I was taken to my crib or safe house, another customizable feature found in Saint’s Row. While I didn’t get a chance to mess around with this particular feature, it appeared that a number of different styles and objects were available, including pool tables and other things which (I can only assume) thugs like to keep lying about the house. It’s not clear how, if at all, this will impact gameplay, but if there’s one thing 17- to 28-year-old males like doing it’s playing house.

There’s a game in here somewhere, and here’s the good news — Saint’s Row 2’s campaign/story mode can be played entirely with a friend via Xbox LIVE or PlayStation Network. This will be a “hop-in, hop-out” experience, with players being able to join any hosts game in progress. For the most part, the story will remain identical whether played alone or with a friend (save for a few co-op exclusive missions), so you won’t be getting a watered down experience if you’re playing with a friend. 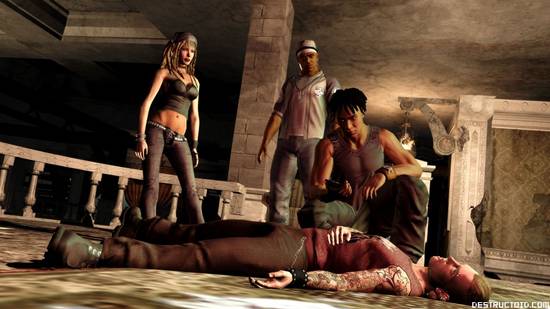 Fortunately, the demo stations were linked for co-op, and I had a chance to get some time with some of the game’s helicopter missions. Not unexpectedly, in this mode, one player will control a helicopter and the other will get to blow things up. I had the distinct pleasure of piloting the aircraft — the A button made the copter rise; the X button would make it descend. Our mission was to protect one of our “homeboys” who was involved in a highs-speed chase with some unrelenting authorities. I’ve never flown a helicopter before, so maybe it seems ridiculous to say that the controls seemed a bit “floaty.” I mean, that’s what helicopters do, right? Whatever the case, I can’t say I felt entirely in control of the copter, and after smashing it into a few buildings (and ultimately the ground), it went up in a flaming ball of smoke. Pro tip: don’t let me control vehicles in games. Ever.

On foot, I had more luck, and it gave me the opportunity to check out Saints Row 2’s tweaked aiming system. Like the original, the sequel gives you freedom in where you can aim your reticule at all times. There is no lock on like you might find in Crackdown or even GTA IV. Clicking in the right analog stick, however, zoomed and changed the angle to a closer over-the-shoulder view that’s all the rage, made popular by Resident Evil 4. The game also features a new hostage system where you can use enemies and civilians as shields. And once you’re done with them — why not? — throw ‘em through a window. 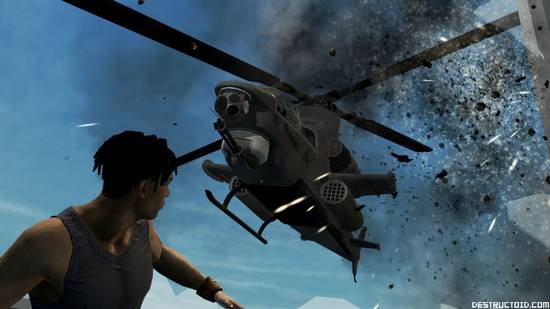 The build on display at the THQ Gamer’s Day was a pre-alpha, which in layman’s terms means it’s nowhere near its retail form. But with the game shipping in August, it has to be said that it appears there’s a lot of work that needs to be done before it’s ready for prime time. Putting the obvious bugs or glitches aside, the frame rate is in dire need of optimization, but more puzzlingly, the visuals didn’t even seem to hold up to that of the original. It’s a bit troubling when the game is only four months out from release, though if memory serves me correctly, the original Saint’s Row was a bit messy leading up to the 360’s launch, but was solid when it shipped a few months later. There’s little doubt that Volition will have time to pull it together.

Really, it looks like Volition are bringing back everything people liked about Saint’s Row and just kind of taking it to the next level. Everything from the look of the game to the customization options is crazier than ever, and anyone looking for a wild (and possibly mindless) romp should keep their eye on this one when it ships later this year.