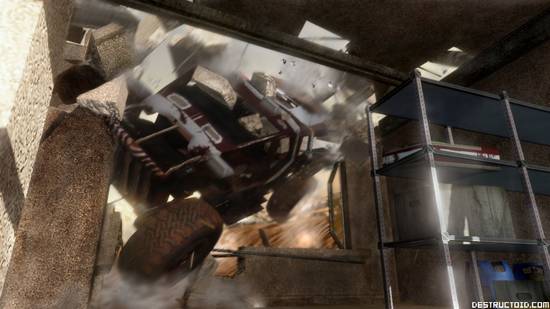 In many ways, THQ’s Gamer’s Day that took place last night at San Francisco’s Terra nightclub remind me a bit of the “old” E3. I’m talking about cramming too many people into a cramped space, lining them up to play games they couldn’t hear, and having developers yell at them about various features of said games. It’s not necessarily the best way to have a handful of gaming journalists experience some of your games for the first time.

But if it’s analogous to the videogame industry conventions of old, it’s only proper that I pick a game of the show, and that honor has to go to Red Faction: Guerilla. The third game in the Red Faction series brings players back to Mars fifty years after the events of the first game, where players will have to battle against (and ultimately overthrow) a militant Earth Defense Force. In a surprise turn, the game tosses out its first-person roots and goes the third-person open-world route, while taking its “destroy anything” GeoMod technology to the next level.

Believe me when I say this — the destructibility found previous Red Faction titles, or even the massive destruction found in Midway’s Stranglehold, is kid’s stuff compared to what you’ll see in Guerilla. Put bluntly, you’ve never been able to f**k up a world like you’re going to be able to when Red Faction: Guerilla ships in 2009, and man … it feels great. 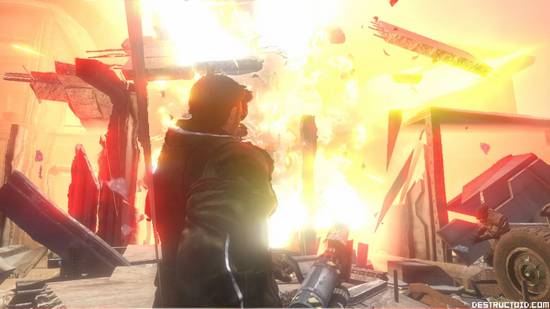 The jaw-dropping destruction of Red Faction: Guerilla is the result of an engine that’s been four years in the making, and the work has definitely paid off. You don’t just break things in Guerilla — “break” is not strong enough of a word, really — you completely obliterate them. When you break a chunk of wall with your character’s mining axe, you not only feel, but you also see its weight. Hunks fall and crumble to the ground into believable pieces, and anything it was supporting will tumble logically as a result. There are no 3D model swaps here, and you won’t find any kind of script trickery; everything is rendered in real-time with realistic physics, and it makes a huge difference on how the world feels and reacts.

For example, every building and structure in Guerilla had to be built in an architecturally sound manner in order for it to exist in-game. Early on in development, when the engine was first presented to the design team, they were having a frustrating time keeping their buildings standing; simply tossing slabs together was not cutting it, and structures were crumbling to the ground in a matter of seconds because of improper support. The team had to actually go back to the drawing board and learn real-world architecture in order to build structurally sound buildings for the game’s world.

With that in mind, simply firing a rocket at a building won’t make it collapse in a pile of rubble if you’re not hitting the right spots. The key is to figure out what it is that is keeping the building structurally sound and then take those points out. It was a blast (no pun intended) placing satchel charges strategically around a building’s support system, and then standing back and watching it crumble to the ground. In some cases the building wouldn’t topple immediately, standing war-torn in an impressive cloud of smoke. But wait for it … wait for it … the real-time physics system will eventually work its magic, and the building will collapse under its own weight in a spectacle that’s as fun to watch as it is to cause. 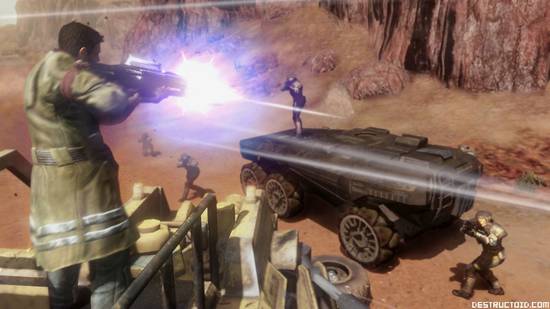 The physics are so precise and so predictable in how they will react (this is science, after all) that it’s completely unpredictable. This is not like destruction in other games, where you shooting a wall will cause a pre-determined hunk to fly off, or a building to topple over the same way you’ve seen other falls a dozen times before. No two explosions or destructive events are the same in Guerilla — I watched and participated in the annihilation of dozens of structures, walls, and buildings, and it was new experience each time. If the game were nothing more than a “playground of destruction” (a reference to Pandemic’s Mercenaries, which Guerilla makes look antiquated), it may very well be worth the this-gen sixty-dollar price tag.

But there’s more going on here that simply smashing things to bits, and like most open-world games Guerilla has the standard “go here, do that” missions. While the game will be story-driven, the demo we played at Gamer’s Day only seemed to include smaller, self-contained side-missions. One had me helping out fellow revolutionaries in a battle against the EDF (including an on-screen meter that showed who was winning the battle), while another required a number of trucks be destroyed. Vehicles, like everything else in the game, will explode into convincing and satisfying bits, including tires and side-panels.

When not making a mess of them, you can also hop into the passenger seat of vehicles, which in the demo included a number of jeeps and some tank-like transport. Surprise — smashing a vehicle into a wall fast enough will cause damage to both the wall and the vehicle. Gone are the dead-stop slams found in other games, and it gives the game an entirely different feel than what you might be used to. One vehicle, the mech-like mining tool “The Walker,” is sure to become a crowd favorite. Using the triggers, you can use the vehicle’s arms to smash up or down, as well as swipe things. Predictably, this is the most fun vehicle I had the chance to use, and it was a blast leveling an entire structure by smashing through it like butter while behind the controls of a walker. Or was it more fun swiping upwards underneath a jeep and sending it through the side of a building? 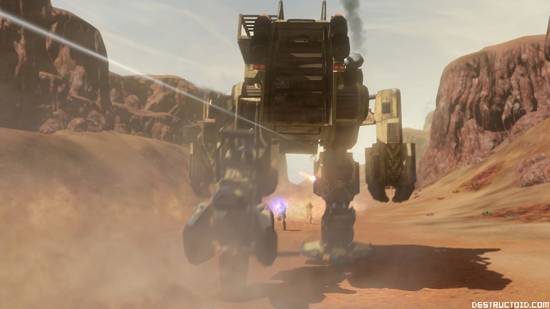 While I spent most of my time tossing satchel charges at vehicles and destroying all manner of things with “The Walker,” the gunplay in Guerilla seems to be equally rewarding, particularly the snap-on, snap-off cover system. Because everything is destructible, you’re never really safe, and neither is your enemy. As a result, all shoot-outs tend to end in messy clouds of smoke and wreckage, with a level of tension and sense of exhilaration you don’t find in many shooters. It was also surprising to find out that shrapnel and pieces of wreckage will also cause damage to you, your enemies, and the environment. If you think this sounds good in writing, it’s nothing compared to when you see it with your own eyes.

The sandbox aspects of Guerilla can’t be ignored, but it’s all crap if it they have no consequence when it comes to gameplay. Because of how the environment can be deformed and destroyed, there are no set paths in which some missions and battles need to be tackled. This opens up the world in a way that can’t be offered in many games, and hopefully Volition will offer some compelling scenarios that take advantage of this fact. The open-ended world and the emphasis on destruction had got me thinking about Mercenaries quite a bit while playing, and one can only hope Guerilla doesn’t fall into the same trap — a big, interactive world that dries up after a few hours of play because there’s not enough to do. 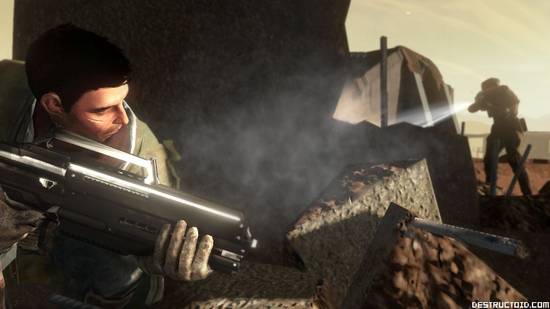 The demo they had on display for us was of a barren, industrialized environment, but Volition are promising that the different games of the area will be varied with things like larger cities that have a vastly different type of architecture. Besides the fact that it exists, the team was also mum on the multiplayer aspects of Guerilla; the opportunity for a fast-paced, wild ride of a deathmatch experience seems perfect, though, and I’m looking forward to seeing how it plays out. One missed opportunity, however, will be a cooperative mode, which I was told in no uncertain terms was just not happening.

THQ were showing an astoundingly compelling line-up of games at their Gamer’s Day this year, but I found that I kept coming back to Guerilla for more once I was finished making my rounds. With the game over a year out from release, the level of polish and pure fun that’s already being shown is pretty incredible, and it kind of hurts a little inside that we have to wait until 2009 for the game to ship to stores.