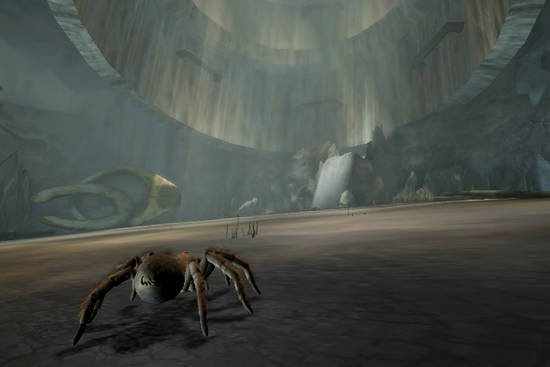 Rainbow Studios is hoping they’ve made the right choice to eschew the cuddly goodness that litters the pages of Cute Overload, instead focusing on the sordid underworld of insects, arachnids, and other creatures that would make you scream if they crawled out of your toilet. THQ’s Wii exclusive Deadly Creatures puts players in the roles of both a scorpion and a tarantula, in what appears to be a potent mix of Animal Planet and Spike TV-like over-exaggerated action.

THQ and Rainbow Studios reps were hesitant to give away too much of the game’s story, which is said to have a dark tone. But from the little bit I was able to gather, it appears that players will alternate between controlling the tarantula and the scorpion in a variety of missions that will, in some way, aid the authorities in solving a crime. Or this could be completely erroneous, and I’ve just given Rainbow Studios sequel gold.

While the slender tarantula’s areas will be more focused on stealth-based gameplay, the scorpion is busy battling pill bugs and dangerous wolf spiders. I had a chance to take an early build of one of the scorpion levels of Deadly Creatures for a test run, and I’ve learned one important lesson: don’t mess with a Gila Monster. 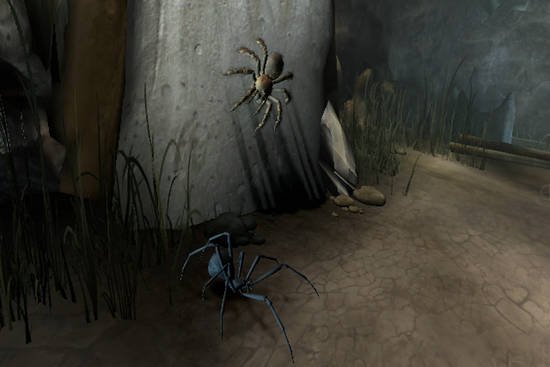 Deadly as they are, these creatures in question are small. Most of the action in Deadly Creatures finds our scorpion and tarantula “heroes” traversing areas like bathroom stalls or coffins, when scaled accordingly, seem larger than life. The area which I played took the scorpion underground, and I made my way through dirt tunnels, crawling up and across twisted roots to reach different areas. The given environment was a bit bland and somewhat confusing; on more than one instance I found myself puzzled as to which way I had to go, and had to be directed to a hard-to-see tunnel or root to proceed. I was told that the final build will have a more evident progression, which is something I think is going to be necessary if they’re to hit the 8- to 18-year-old demographic they’re targeting.

The scorpion’s movement is controlled with the nunchuck’s analog stick, as expected.  It can be made to clickity-clack along a bit faster while moving forward with the analog stick and shaking the nunchuck. This felt pretty natural, especially during a particular hectic “boss battle” which had me desperately trying to escape an Gila Monster who would toss me on my back if it made contact; you simply shake the Wii remote to right yourself. The scorpion also has a dig ability, which can be performed in certain situations by alternately drumming the Wii remote and the nunchuck to replicate the scorpion’s digging motions with its pinchers.

The star of the show here is supposedly the intense combat, and yes, Rainbow Studios are well aware that a scorpion can’t do a one-two punch combination with its pinchers. Deadly Creatures features a host of real-life creepy crawlies, but takes liberties in how some of them behave. By using the A button, it’s possible to target and lock on enemies. Once in your sights, the B button and the Z button will control your right and left pinchers respectively. By alternating button presses, the scorpion will deliver a series of blows, and a sweep of the Wii remote will have him swinging his tail around in a vicious sweep maneuver. 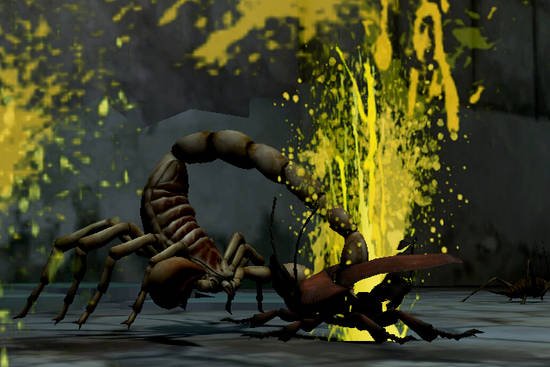 Once an enemy has been completely humiliated and is on its last legs, you can deliver a deadly finishing blow — a downward stab with your stinger, for example — which results in a blast of green bug guts that splash the screen. After pressing Z and B together, the finishers are performed by following on-screen cues – up with the Wii remote, and then maybe sweeping up or outwards with both hands, for instance. I was able to perform a few finishers on my own, but found that the game required my movements to be too precise, or I often unintentionally killed my adversary before I could deliver the fatality correctly.

I’m keen on the concept of Deadly Creatures, and I have a feeling it’s really going to hit home with the target audience, particularly those in their early-teens. But there’s a still a lot of work that needs to be done, and it’s a good thing that the game won’t be shipping until later this year. I’d hate to see this one rushed to market and permanently scar the action-insect genre for the rest of the industry.