Once niche, music and rhythm games are now a big business. The popularity of Dance Dance Revolution and the money-printing power of Activision’s Guitar Hero have assured the success of the genre. It could be easy to cash-in on the sudden boom in the genre’s popularity, and many are probably already cashing their checks (see: Dancing with the Stars, for example). Fortunately, Planet Moon Studio’s Battle of the Bands doesn’t seem like a shallow attempt to pad THQ’s bank account.

Imagine if you will L.L. Cool J’s “Mama Said Knock You Out.” If you’ve crawled out your hole at any point over the past ten years, that shouldn’t be a problem. Now, try to picture the song being played by a metal band. Then, halfway through the song, some dude playing a fiddle fires a gun at the rock band’s guitar player, and the song turns into a country tune. Welcome to the bizarre world of Battle of the Bands.

While this Wii exclusive takes cues from a many rhythm games of the past, its unique style and approach make it one of the more interesting games in the genre. THQ’s Gamer’s Day was the second time I had a chance to go hands-on with Battle of the Bands (my first was a month ago when THQ had their Wii showcase in New York City), and it’s official — I’m pretty sure I’m liking it.

Hit the jump for details and impressions. 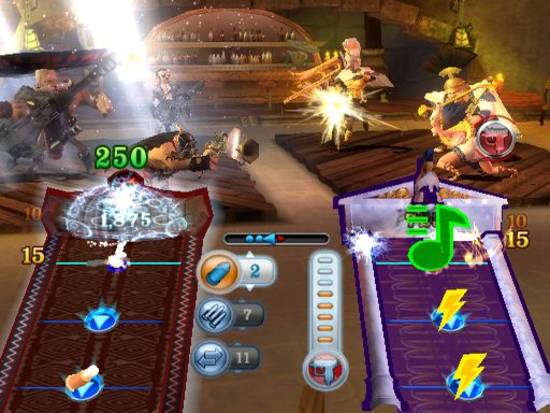 Battle of the Bands plays out as a musical tug of war, and has two bands vying for control of a song and the right to play it in their genre of choice. The game will feature seven bands, each representing one of five distinct musical styles – rock, country, hip-hop, Latin, and marching band. Planet Moon have struck gold with this one, folks, and actually brought cover bands into the studio to record genre-bending versions of 30 recognizable songs, ranging from the Gorillaz’s “Feel Good Inc.” to The Soggy Bottom Boy’s “Man of Constant Sorrow.” Do the math, people — that’s 150 different musical tracks, and that’s not evening taking into account the classical treatment that some songs get when you reach the single-player campaign’s “boss band,” Mr. Hong’s Violent Orchestra.

If it sounds ridiculous, it’s because it is, and the results are unsurprisingly hilarious. Tempos are matched for all of the songs, so you’ll seamlessly hear songs blend from one genre to another. You haven’t lived until you’ve heard Cypress Hill’s “Insane in the Brain” performed as a country song. As bands battle one another, on-screen avatars (all represented by highly-stylized, cartoon stereotypes) will physically assault each other with guitars that turn into rocket launchers. Like I said, it’s all pretty ridiculous.

Battle of the Bands is played entirely with the Wii remote, as you try to match on-screen prompts that scroll down in a Guitar Hero-style fashion. But instead of colors you match on a peripheral, you’ll have to shake the remote down, up, left or right, and even poke at the screen in rhythm. Imagine Electronic Art’s Boogie, with one key difference — the movements you’re making with your wrist tie into the songs well, and most importantly, Battle of the Bands is actually kind of fun. Getting into the song, it seemed like the motions I was required to do made sense, and there was some nice rumble feedback with the controller that gave it a little extra punch. 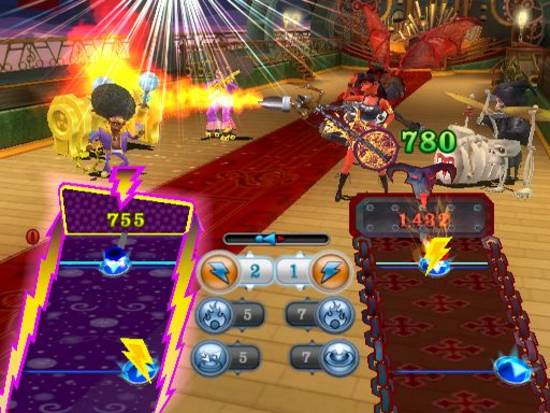 The battle portion really comes into play when players can launch special attacks (think Guitar Hero III’s battle mode) and during the game’s “Face Off” moments, which has players tossing green skulls at one another’s screen. By hitting skull icons as they scroll up the screen, skulls will fly in the direction of your opponent, which they can then block with timed presses of the Wii remote’s B button. Like the motion controls, the timing is tied to the song and rhythm, and can get quite tricky when a barrage of skulls is launched in your direction.

By no means is Battle of the Bands going to be a replacement for something like Guitar Hero or Rock Band, and anyone who sees the game in action and makes any kind of real comparison is way off the mark. Instead, it looks to be a fun, incredibly hilarious diversion from the popular peripheral-based titles, and may even become a party favorite among friends. On that note, I’m off to work on the Battle of the Band drinking game, which I’m on a strict deadline to get done before the game’s release later this month.