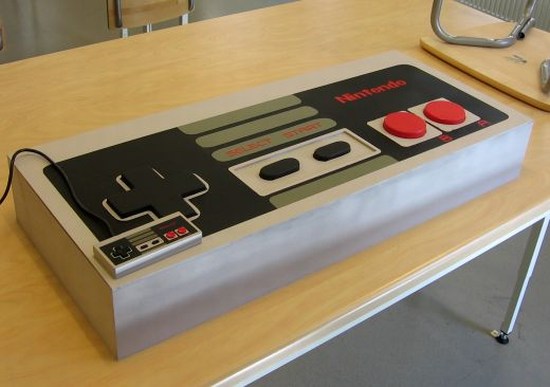 No matter how many times someone makes a humongous NES controller out of something that wasn’t previously an NES controller, I just get excited. Look, some people get excited about the same stuff no matter what it is, cause it’s what they like. I’m glad the thing I like is monstrous NES controllers and not scat play.

Anyway, these awesome Swedish students made this PC case for a class project and only spent $300 bucks on the whole thing. I know, you want to know how to do it, don’t you? Yep, I did too, and apparently Swedish people are considerate as well as clever, because they detail the process step by step on this website if you want to make your PC into a mad conversation piece as well.

For me, there’s no limit to how gigantic an ode to NES should be. In my mind, I see an NES controller replacing the monolith of 2001 fame, except instead of hovering forbodingly over the universe while apes wail and beat each other with thigh bones, people are jumping on the buttons with pogo sticks and playing most unefficiant game of Ninja Gaiden II ever, yet are still having a blast. Cheers for imagination.