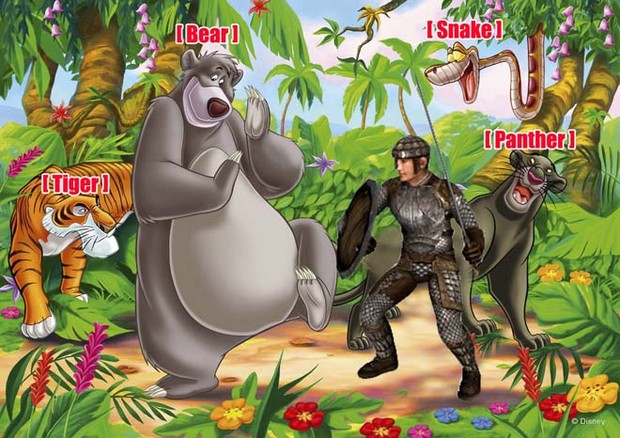 As some of you have found out, I’m an MMO player. That’s right, I buy a game so I can pay for the privilege of playing it every month. Now, this article isn’t about MMO’s or monthly fees, but since I’m currently hobbiting my way around Middle Earth, I’ve noticed a common trend in RPG’s that pertains to this month’s theme and I thought I’d share it with you all.

So for those of you who’ve never jumped on the MMO bandwagon, sit back, relax and allow me to take you through the epic journey you are missing out on. Those of you who have played MMO’s are free to sit back and nod knowingly you’ve been there and done this more often then you’d like to admit. LOTR starts off in standard MMO fashion, with the creation of your character. After all, the world does in fact revolve around you, at least for now. Once you’ve made your Middle Earth self and selected an appropriate name that fits the world (Ilovewaffles) you are ready to set off on your adventure through perhaps one of the most acclaimed story worlds in all of fantasy literature.

Once you’ve blundered your way through the tutorial mission, vanquishing whatever minor villain the game lovingly placed in front of you and crippled so badly that you had no chance of losing, it’s time for the real game to start.

As you take in your majestic surroundings you notice a nearby NPC with a glowing ring over their head. Ah ha! Quest giver! Now the game can really start. Now you can test your skills against the forces of Sauron’s army, destroy the one ring, save the world, get lots of dwarven chicks, ect. This is your story to tell and by God you will do it justice.

I’m sorry, but your princess is in another castle

As you move your mouse over the NPC you take a deep breath, pausing in silent contemplation. Are you really ready for this? Can you really stand alone against the tides of swarming baddies that are surely sharpening their weapons and plotting your demise?

Yes, you decide, now its time to battle the dark forces and bring righteousness back to this world. You right-click the NPC and read your first non-tutorial quest.

Okay, not quite what you were expecting. Weren’t there some bandits guarding the road nearby? Well, okay I guess even the mightiest warriors have to get their start somewhere. I’ve always been a fan of wolves and would prefer avoiding them over having to kill them, but you don’t want to look like a sissy in front of the elves. So, you kill the wolves, loads of them in fact.

As you make your way back to the quest giver, coated in conspicuous amounts of blood and fur, you prepare yourself yet again for a quest truly worthy of Tolkien’s epic story. Perhaps a little Nazgûl action?

And so on. Now, to be fair there are occasional “Kill Bandits” quests peppered in as well, but these guys are small potatoes compared to the big picture, so what gives? If the quest givers are to be believed the animals are posing a serious threat to the towns and cities you are visiting. If their cuddly frolicking goes unchecked countless residents will suffer the consequences. Add in to this the fact that your paltry skill level leaves you unsuited for any true combat and you find yourself with little choice, but to take on the local animal population.

Now in some RPG’s they have the courtesy to create “monsters” for you to battle. Oddly deformed and unusual critters that you encounter on your travels. Sometimes there is no avoiding these monstrosities as you cannot see them until they have already sprung up to attack you and your party. While these random encounters can be tedious they also serve to build your animosity and desire to kill the beasts that continually attack you. They pose a real threat to you and anyone who ventures outside the city walls.

Kill it with fire!

What about the animals? In MMO’s it’s usually possible to avoid all, but the rabid and zombified variety by just walking around them or outrunning them as the need arises. They don’t mean any harm, they just want to be fuzzy and lead unspectacular lives of animal mediocrity. Not only are they wholly unaware of your great quest to put an end to evil, they remain completely neutral on the subject. This, however, doesn’t change the fact that not only will you kill them, you must kill them.

She’s only protecting her cubs you heartless jerk.

If you take a PETA loving carebear approach, refusing to kill these helpless animals you won’t be able to grind to a high enough level to be effective against real enemies. If you skip on all the quests that order the destruction of snuggly kitty cats you will miss valuable experience points and better gear. The spiders and snakes you face may not be evil, but they sure as heck are in your way. Your way is the only way that matters after all.

So lets take just a moment to think back on all the woodland creatures that have been felled by our blades, burned by our magic and maimed by our lutes. When the day is won and we stand on the battle grounds of Mordor, let us not forget the noble creatures who gave their lives so that we could grow to be true champions. Here’s to you woodland creatures, big and small, your sacrifice was the greatest of all.

You laughed too, admit it.