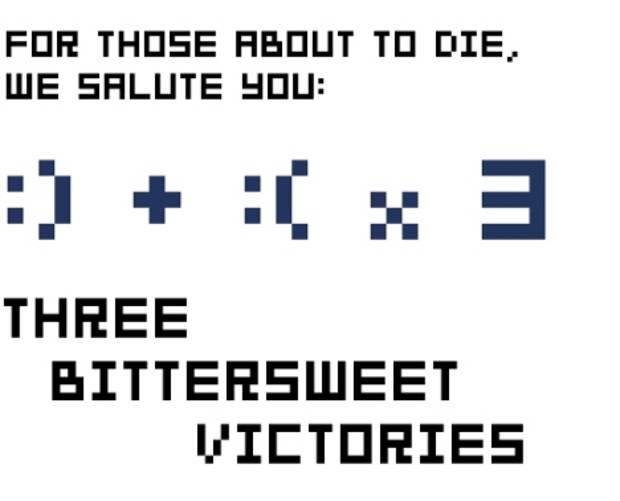 Kill, kill, kill. Whether it’s jumping onto heads or setting elaborate traps, an awful lot of it goes on in videogames. Most of the time, it’s an exhilarating rush, whether it be something as carefree as watching a Koopa shell plow through a line of Goombas in a Mario game or as explicitly glorified as the likes of Madworld.

There’s no denying it — killing in games is satisfying. Some games, however, choose not to play on our base desires in such a simplistic manner, even if only for a moment. There are many ways that a game can make us feel emotions more complex than a simple ‘HELL YEAH!’ upon landing the final blow, which makes me wonder why it happens so rarely. Perhaps you question your motives. Or it could be you were once friends with the enemy. Then again, maybe the road to victory has been simply too wearying to feel triumphant.

Here, I pay tribute to three such bittersweet, sometimes even hollow victories.

Obligatory Spoiler Warning: If you haven’t played Grim Fandango, Wing Commander 3 or Shadow of the Colossus and wish to, I highly recommend you do so before reading on as I will be talking about important moments in the games in some detail.

Strange, perhaps, that my first in a post about killing takes place in a world whose inhabitants are already dead. In the Land of The Dead, though, a form of death is perfectly possible. At first, it seems absurd. Known as ‘sprouting,’ the victim is exposed to a substance, sproutilla, which causes their bones to burst into flowers. This, seemingly, is a more permanent form of death than the one which originally sent them packing to the Land of the Dead. As silly as it sounds, it turns out to be a rather grisly, macabre end.

Enter Hector LeMans. This man is responsible for more sproutings than anyone. When you finally confront him it is at a greenhouse atop a hill, a hill made grotesquely beautiful by its flowers — the sprouted remains of his many victims. Most recently added to the pile is your friend and mentor, sacrificing himself bravely for the cause. There’s no doubt that Hector LeMans is one bad dude that must go down — if anyone is deserving of an unhealthy dose of sproutilla, it’s him.

This is quickly achieved. Managing to fill the greenhouse with sproutilla vapour, your foe falls victim to the very substance he has used on so many others. Manny creeps towards the greenhouse doors, hardly daring to believe that he is finished. Reaching his hand towards the handle he is stopped in his tracks as the flowery remains of Hector splatter against the other side of the door.

There’s no jump for joy, no exclamation of victory. The path to this moment has taken four years. Friends have been lost, people betrayed and Manny himself has made more than his share of mistakes on the way. Even the confrontation itself was no confrontation at all. Too powerless to face his enemy directly, instead exploiting the sprinkler system wins the day — necessary, but hardly heroic. Yes, when Hector LeMans is finally defeated, there is no response more appropriate than for Manny to toss his gun wearily into the weeds and walk away.

Hobbes (that’s his callsign, geek points for the first person to give his real name) was my favourite character from the Wing Commander series and to this day I feel the slightest tinge of anger when I think about what they did to him in the third game.

By the time Wing Commander 3 begins, Hobbes and Luke Sk — uh, Colonel Christopher Blair already have quite a history. Like most people, the protagonist started out mistrustful in Wing Commander 2. A Kilrathiwingman? How could he possibly be trusted. For a cat to defect to the humans —

that’s nigh on unheard of. Soon, however, you learn that Hobbes is one of the most reliable wingmen you could have. You learn to trust him with your life.

By Wing Commander 3 you find yourself constantly having to defend your friend’s honour, passionately railing against the prejudice that he experiences on a daily basis. How dare people say such things about the wingman who has saved your life on so many occasions?

If it were that simple, perhaps victory would be sweet. However, it turns out that Hobbes, for all the time he knew you, had no idea that he was working for the enemy. A subliminal trigger wakes him from his ‘sleeper agent’ status and his true self awakens. The perfect spy in every sense, for all of those victories he experienced with you, all those years of friendship were perfectly genuine until the moment the switch flipped.

Where you face Hobbes depends on whether you choose to immediately give chase or let go (in which case he reappears much later). It scarcely matters, though — the battle itself is not as memorable as the significance behind the battle.

Shadow of the Colossus — Phalanx

Frankly, I could have picked three of the Colossi from SotC at random and I’d have my three titular bittersweet victories right there. You kill because you have to, because it is the only way to revive the girl in the temple. You bear no personal grudge against your foes and they bear no grudge against you. The act of killing is utterly exhilarating — until you land that final blow. As the Colossus topples, the music perfectly mirrored the way I suddenly felt about the act, each and every time:

Even the most violent of Colossi act more like animals whose homes have been invaded than malicious beasts. The one I want to talk about specifically, though, is almost entirely passive.

Rising majestically out of the sand it soars into the air, the beautiful thing taking flight, circling the sky with more grace than anything the player has encountered so far. Even as you injure it to bring it closer to the ground, the thing simply ignores you, dragging its ‘wings’ through the sand as it almost seems to patiently wait for its doom. The most violent action it ever performs is to plunge back into the sand as you run along the length of its back, looking for the next weak spot — and it does that anyway, whether you happen to be riding it or not!

In most videogame battles, even many in SotC, there is at least some sense that you are fighting for your life. Kill or be killed is the order of the day. Here, though, is a creature who you are only killing because you are told you have to. If you stood in the sand watching it all day, it would still remain peacefully gliding through the air, minding its own business. A series of daring jumps aside, it is almost impossible to kill Phalanx and feel heroic.

If I had to conclude anything, it would be that I think it’s valuable when a game makes a player think a little more deeply about their triumphs than ‘Killing good/fun; not killing bad/boring.’ The above are among my personal favourite examples of this and I could mention more, such as the Big Daddies in BioShock or the Death From Above sequence in Call of Duty 4.

On the other hand, by no means would I want to suggest that all games should aim to assign a deeper significance to killing enemies. It just makes me a little sad that the default way of thinking is still to treat killing in games as nothing more than ‘another fun thing to do.’