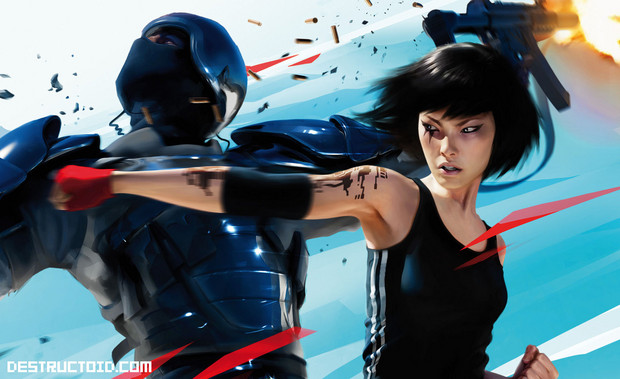 [It’s time for another Monthly Musing — the monthly community blog theme that provides readers with a chance to get their articles and discussions printed on the frontpage. Also, Happy Birthday, Tubatic!– CTZ]

Last year’s hyped-up darling, Mirror’s Edge, took a mild critical beating for its low cost cut-scenes, restricted play area and death riddled learning curve. Its shallow and arguably unfair fighting system brought much heat upon the game for failing to bring the “Shooter” along with this First Person runner gameplay. While most gamers considered it a negative, I think the enemy difficulty of the game suggested something that’s very hard to swallow:

As an evil organization, the security forces of The City are the most effective and competent outfit in gaming. Every other minion horde could learn at least seven good lessons from The City’s Finest.

Having the best peace keeping force in the realm of videogames doesn’t come cheap. Hero killing is an investment in even the smallest of detail. Want to control the streets? You’ll need a fleet of cop cars. Want to control the rooftops? Five or six helicopters are a good start. From body armor, to training facilities, to repainting the entire city under a strict five color system just so your targets stick out against EVERYTHING, mad bills must be spent. No expense can be spared. Especially since …

(2) Property damage is not a factor

(3) Line up your target and take your shot

If there’s anything that the men (and women?) of the various city forces can take pride in, its their excellent marksmanship scores. Where most minions will be satisfied with sub-par aim in favor of laser or suppressive automatic weaponry, The City’s Blues follow their training by the book. Run and gun is simply bad form on The Force. Any good shot is worth planting your feet for, especially if you’re wearing the best body armor money can buy.

(4) If you’re wearing body armor, you can take a few bullets

I have stared down Blues while wielding the heftiest of automatic rifles, and they have still stood there and clipped off a few shots. Knowing that their body armor can absorb a decent number of snapshots and focus fire alike. SWAT team members will eschew duck and cover for a really good, duel-at-high-noon stand off. Given enough time, you can still get in a few shots and stump a runner bearing right down on you from a dozen yards away. Its worked, and they know it. Runner battles favor the bold, so its crucial that all security forces …

(5) Work together or die alone

It’s rare to get a squad to split up in The City. Within closed spaces, such as warehouses and parking lots, positioning and room cover is key. Maintaining the buddy system is sure to give at least one of you a fighting chance.

Best case scenario, you’ll intimidate your hero enough for them to run off and allow you to fight another day. Second chances like this can be a great learning experience.

(6) Learning is a lifelong commitment

Without giving too much away, its incredibly clear 3/4ths of the way through Mirror’s Edge that The City is committed to addressing the threat of runners and are sparing no expense to educate and evolve their fighting force. Only a fool does the same thing expecting new results. As a hero gets closer to whatever their looking for, you have to be prepared to turn your workforce output up to eleven.

But, like all good action plans, even the best of evil operations is vulnerable to a major setback.

(7) If all of your immediate superiors are incapacitated, just go home

If you just saw the hero flip out and do some real hardcore, Jackie Chan type stunts on your boss, its time to go. Whether your boss survived or not, seeing a hero manage that all while you’ve got your guns trained on him or her warrants some silent praise and a subtle walk off. With any luck, you’ll work your way into middle management by the time the next major crackdown on runners hits its stride.

What do you think Destructoid? Was the balance and fighting system in Mirror’s Edge really that bad, or are you willing to admit that you were put up against an enemy that didn’t stroke your gamer ego by pulling its punches?