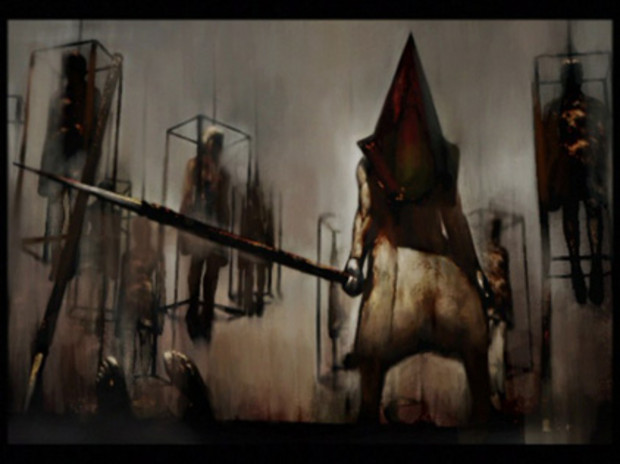 Silent Hill is not really known for its combat. The focus was usually on trying to avoid combat rather than taking out any enemy in your path. Your characters are survivors in a nightmarish hellscape of the minds of those who reside within, created through the supernatural powers that influence the town. Due to this, the antagonists take on many different forms.

There is one, however, that stands far above the rest. One who’s menace is so great, you can see the aura of malice around him. One who haunts you throughout your journey. One who is seemingly invincible.

He is Pyramid Head, and he will end you.

First, a disclaimer: Read no further should you hope to not see spoilers for Silent Hill 2. If you haven’t played it already, you suck. If you get butt hurt over spoilers about an eight year old game, die in a fire. In order to properly give tribute to this enemy, certain things must be discussed that will give away key elements of the plot to the game, and to skirt the topics would be tragic indeed. I have chosen to discuss what I deem necessary to pay homage to the foe, and if you have a problem with having things revealed for you, then read no further.

From the first time James Sunderland sees Pyramid Head in Silent Hill 2, you are filled with a sense of dread. The crimson miasma that surrounds him as he stares James down from the other side of the iron bars that separates them is more than a little unnerving. Unflinching, unmoving, he stares with a menace that speaks volumes and makes you think about the wisdom of stepping into the room you were about to enter. As unnerving as this brief encounter is, it is only the beginning.

After a bit of wandering around the apartment complex, you have James enter a room. Upon entering, James quickly takes refuge inside a closet, startled by what he has run into. Pyramid Head is present once again, and this time only a thin closet door separates you from his threat. This time, rather than an ominous still figure, he is quite busy performing vaguely sexual motions towards a pair of Mannequin monsters. After finishing his business with the pair (and apparently finishing them off as well), he lumbers towards the closet that James is hiding in. James, in response, unloads a conveniently placed clip of bullets into the beast, causing him to vacate the room.

Through out the game, Pyramid Head continues to make his appearances. Sometimes being a direct threat to James, others being more of an ominous presence or obstacle. However, there is one constant; you can’t stop him. In your first real encounter with him, you can only shoot at him until he is summoned away by a distant siren. You are robbed of the satisfaction of defeating a powerful enemy, but you are left with the relief of knowing the threat has, at least for the moment, passed.

And as demonstrated by the Mannequins, James is not his only prey. This is made evident when he kills Maria not once, but three times (twice before your very eyes). But even after all this, the true terror of Pyramid Head, and what makes him most memorable, is what he represents: James Sunderland himself.

Think back to what I stated earlier. Silent Hill is populated by warped reflections of resident’s mind. This holds true for Pyramid Head, as well as the other creatures of the game (even Maria). Pyramid Head is the manifestation of James Sunderland’s sexual frustration and desire to be punished for what he has done. With his wife being plagued by a terminal disease, James was unable to engage in the activities he desired (for those of you who are slower, it means they couldn’t have sex). This explains Pyramid Head’s behavior with the Mannequins early in the game (as well as the form of many of the enemies and Maria). The fact that James killed his wife explains why Pyramid Head hunts down and kills Maria at every available opportunity.

Finally, James desire to be punished can be observed by the encounters with Pyramid Head when you are forced to fight. If you slip up, James is killed. However, should you succeed, the encounters give a grim foreshadowing of the games endings. In the first encounter, Pyramid Head simply walks into the water, disappearing into its murky depths. In the encounter with the twin Pyramid Heads wielding spears, James does not defeat them as they impale themselves upon sustaining enough damage. I’m also sure you could say something low brow about how James is overcompensating for something based on the size of Pyramid Head’s weaponry as well, but I feel the subject matter is a bit too serious for a dick joke.

Pyramid Head is an enemy worthy of tribute due to his importance to the narrative of the game that many feel is a piece of art. And while others have tried to pay homage to him (Silent Hill Homecoming and the Silent Hill movie), in doing so they robbed him of what made him noteworthy. I say we remember him for what he is, not what others choose to make him.

Here’s to you, Pyramid Head. Your importance has not been forgotten.